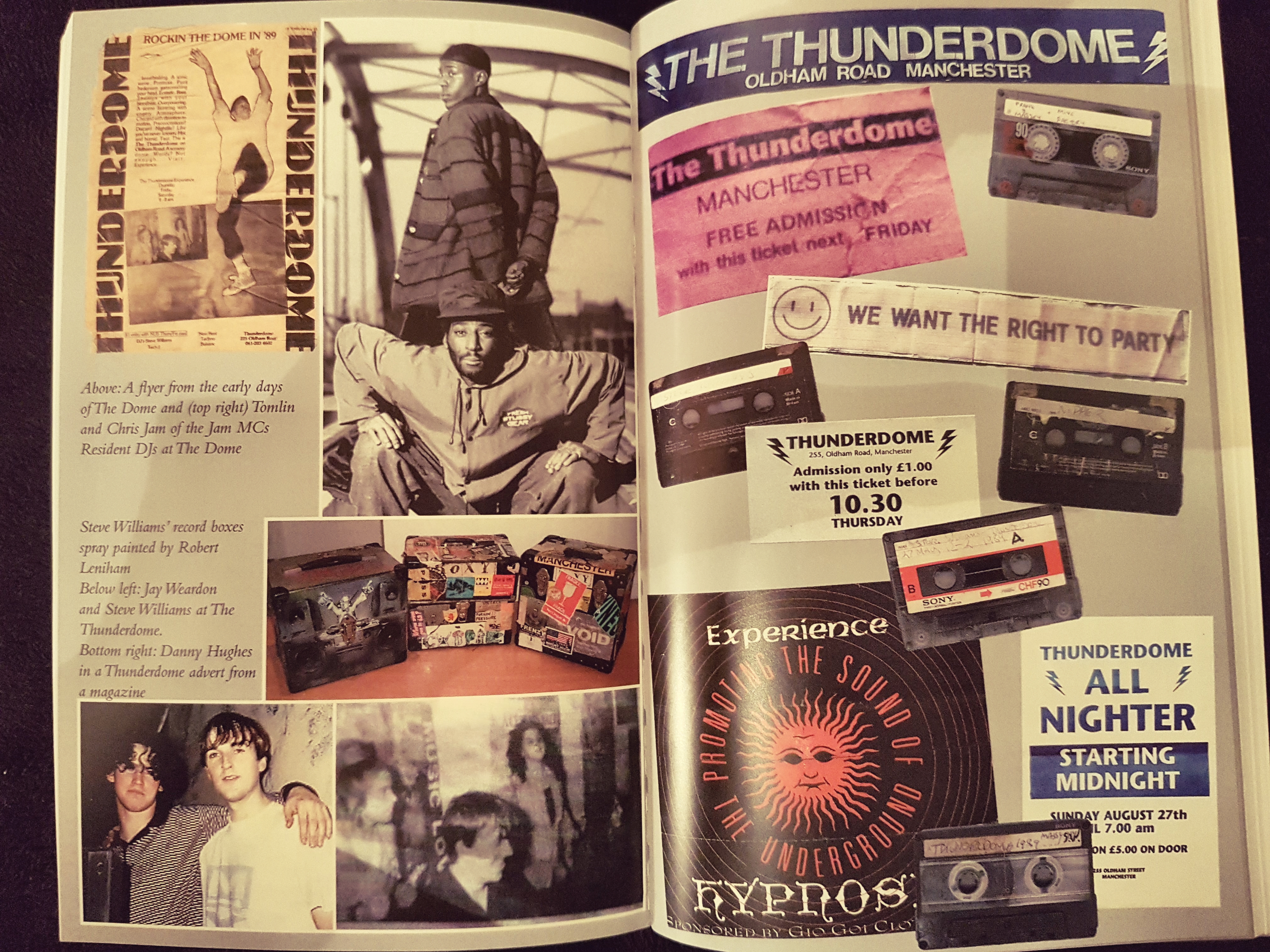 FAC Col aka Collin Gibbins has kindly given permission to showcase some pages from his excellent book on life and music in Manchester. A truly born n bred Manc, Col has lived through the different music scenes on the never- ending ‘Manc’ conveyor belt culminating with the rise of Acid house. He talks candidly about his own experiences in the Hacienda and the Thunderdome and how his obsession with everything ‘Factory Records’ related took over his life, to the point where he now has one of the biggest private collections of the original Factory back catalogue.

To be a Mancunian you need to be born in the Manchester boundaries where your birth is registered, as I was, born at Crumpsall Hospital, birth registered at Blackley Library which was on Rochdale Road M9, making this a true “Manc” story.

I have every respect for most music; my vinyl collection over the past 30 years is proof of this. The natural evolution of music has happened over this time period up to the present day. As an early indication of my love of music, I once felt the hairs on my neck stand up when I was stood next to a rally car. It’s repetitive engine sound and large bore exhaust vibrated through my body.

It was rhythmic, like a night in the Thunderdome or Hacienda. The boom of the engine may as well have been the boom from a speaker. “Can you hear that?” I said, “that’s music!” The reply from my pal was “do you hear music in everything” says it all.

The music of the late 70s and early 80s takes me back in time. Older mates tell me of the Electric Circus in Collyhurst and others of the Sex Pistols playing the Lesser Free Trade Hall. I was too young to really get into Punk. New wave came and went and then Acid House arrived, a new benchmark was set in Manchester’s hamlets,

it was our time – “You old punks, weirdos and rockers you’ve had your time, this is ours!”

As I clambered up from the muddy field, jeans soaked at the knees and hands full of records desperate to ask the seller “How much are these mate?” before some dealer beat me to it, I became blinded by the headlights of cars now arriving in the dawn’s early light. It was at this point I had a strong flash back to a few years earlier when I would clamber around muddy fields full of anticipation. The juke box in my head kicked in with the timeless beat of an acid house cassette which now gathered dust in my car with the faded pen name just visible as ‘Steve Williams ‘89 Thunderdome’ on its label. It occurred to me that all this car boot sale needed was my old firm and a few trips to get another party started!

I could see them all now; long-haired, youthful, in brightly coloured, loose fitting, garish clothes dancing around me. Manny was even on the car bonnet smoking a massive bifter lighting up the early morning air like a halo around him with each drag; the hustle and bustle was still the same, dodging people to get to a destination as faces came at you from dark corners; hooded and serious – but this was a car boot, not a party in a warehouse back in 1989. The only things to get high on here were car fumes and the euphoria of finding some missing links to a collection I had gone mental on completing for the past decade or so. It had been a case of trading one buzz for another – I may have swapped partying for completism but the desire was just the same, even if the latter cost me more…

So how did I get there? What drove a humble tradesman to get every last item of Factory Records published music? What hold did the most influential independent record label of all time have on my life? How did I afford it (don’t ask the wife!)? And what has fed this apparently insane love of music? ……

The Thunderdome became my second home, as did the Hacienda of old, the all-nighters started to become more prevalent. At the weekends and the club itself was shut for a short period, the reason as to why that was has escaped me, it just could have been for a repaint and removing some seating to get more bodies in. When it reopened the first time, we were the first heads back in, our kid came out of the gents with paint on his face and hands, we laughed as he looked like an Apache Indian with his long hair and newly found face paint.

This was probably the first time we heard ‘Pump Up the Jam’ by Technotronic from Belgian / Congolese, which was more the main stream at the time. A track by a group from Holland called ‘Ride on Time’ by Black Box also started to be played, later I would hear Mike Pickering (another early Dome DJ), ‘stood on’ for them as a band at the time. The tide in the Thunderdome was changing, better sound system, stools and small tables gone there was nowhere to chill; just pack em’ in and rock their nuts off. Steve Dermo had just come back from Blackpool and we had a pint in the Clough Hotel. He was staying at Warren’s in the flats, so we got to see more of him but the familiar set up was changing with us as friends, Warren was knocking around with Nicko and Robo and the band, I was with our Mark, Ray, Manny, Massey, Maz, Nicky, and the Rodd.

Between the Thunderdome and the Hacienda where we went on Thursdays, Saturday there and Friday back here, that was the usual procedure but we started to notice the queue at the Hacienda had stretched to right round the corner. We actually stood in the middle of the bridge one night on Albion street, the sun was shining as we made the back of the queue; “What’s all this?” our kid said, “Is there a coach party in or summat?” Soon we were blagged by Tracie Farnsworth and her mate to jump the queue, so I let them in, “I’m with you Col” Tracie said just in case of trouble from the people behind us. We made it look like we were a couple, you know the dance anyway.

back with the Firm. It took over an hour to get in and the Smiths were on the door too as always. Now round our way when the lads spoke about prominent families in the parish, we did not call them by their name they were just the Smiths and everyone got the picture regarding that in our circle, so I knew that it was those boys at the front checking everyone for drugs, that’s why it took so long to get in. “Guess what? It’s raining now” I said as we all huddled into the Hacienda’s wall to avoid getting wet, as I reached the first step with Tracie and her mate. I saw the doormen checking every nook and cranny of everyone’s pockets and bags for E’s. The bags were being collected and bagged by the doormen and slaps given out when the kids challenged them, thankfully we all got in and began the night’s partying as we headed for our usual spot near the dog leg wall the first one at the corner of the dance floor as you walked in then up the two steps or so to the underside of the veranda.

We felt the heat as it rose from the massive, all dancing in unison to a Guy Called Gerald track ‘Voodoo Ray’. All the hugs started with passers-by such a happy environment

but this soon changed when over to our left under the staircase it kicked off and blow me I saw Tucker being’ carried aloft by a gang of black guys and then Muzzer soon followed. “Woah!” I want to shout and tried to move forward but was dragged back by one of the lads, “Keep out of it Col, it isn’t our trouble”.

NWA’s ‘Fuck The Police’ Still Fucking Off The Police