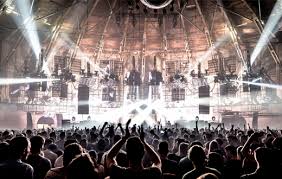 Its New Year’s Day, New Year’s Eve younger sibling that may not get as much recognition in terms of party ambience and nightlife, but still packs a punch and in terms of Awakenings events in the past two decades. The legend of the nightclub that is Gashouder has seen stage most of the events, this 3,500-capacity venue has the characteristics, charm and enthusiasm of any given human and has surely soaked up the enjoyment of previous audiences and left it eternally suspended in the atmosphere.

The night was sold out! Four techno enthusiasts arrive at Schiphol airport frenzied in eagerness and anticipation of the night to come, the line up was set for success, Dax J’s and Len Faki’s performances are deemed as indestructible whilst Charlotte De Witte is a worthy pioneer for female electronic music DJ’s.

You could hear the thud of the club vibrating through the coffee shop window as we had a pre-herbal remedy. As we entered the club we screamed with the delight as the venue engulfed our minds and souls with the sheer scale and visuals, the colours from the wide fit screen popped as fire blazed from each corner of the stadium with indoor, illuminous fireworks screamed diagonally in perfect timing with the beat. In terms of the crowds there were no show off’s, social media poser’s
or anyone trying to start trouble, everyone was here for one reason…to rave!

Charlotte De Witte started her set as we arrived and gave a dramatic performance as if every track she played gave a story, seemingly a shy flower her sets contrast with what certain people would stereotype as a ‘feminine’ performance as her set was eluding, dark and unforgivingly merciless. This Belgian dj gave elements of underground whilst satisfying the audience

Sam Paganini was to stage afterwards, jokingly a doppelganger to Len Faki, this Drumcode signed DJ gave an outstanding performance. He is a DJ that adheres to a mainstream techno audience which isn’t a bad thing, he has made this selective genre into easy listening for certain audience members spouting such classics as Jeff Mills ‘The Bells’.

Berghain resident Len Faki was greeted with applause and the over exuberant Dutch presenter as he opened with a banger! His set was down to earth and brought flare as most of his sets do, it consisted techno, minimal techno and the up-beat inclusion of classic ‘Inner City Good Life’. He danced and lip synced to the track being at one with the crowd.

With a year of controversies surrounding this dj at his near of attempt of being arrested and being put into a Tunisian prison, his effortless and hardworking traits as a DJ and producer always took centre stage when it came to Dax J. His set was raw to the core, hard and hints of warped sounds that enraptured the audience and Dax no apologies asked making the audience his prisoners of sound.

Dax brought slammer after slammer breaking the roof off Gashouder, he has never quite shied away from his Drum and Bass roots with his hardcore style.

Headstrong (Randomer and Clouds) finished off the night with a bang, both quiet obscure and ever- changing DJ’s which combined into one made a very delightful mixture of sounds, my highlight of the set was Randomer pleasing the crowd with his unforgettable track ‘Bring’. It was 7am, the lights turned on and the crowd cheered for me, you really thought Headstrong had finished their set with such a surrounding buzz? Instantly the zombified crowd worked up every limb in their body as they played a heavy gabber track, a Dutch favourite when it comes to music genres. Even though random and unexpected it finished off the night perfectly.

By far the best night I have ever been too!