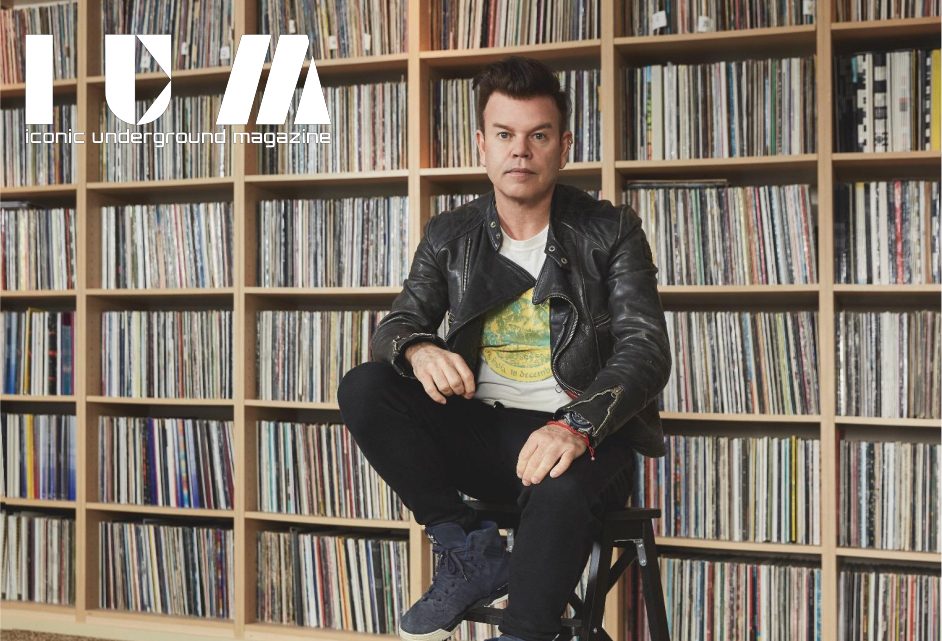 When it comes to icons of UK House Music, there’s few, if any, bigger than Paul Oakenfold. One of the original Balearic crew that brought back a new sound to London from Ibiza over thirty years ago. He was also at the forefront of the 90’s Indie / Dance crossover, producing the Happy Mondays seminal album, Pills ‘n’ Thrills and Bellyaches as well as creating classic remixes for artists as diverse as Massive Attack and U2.

His legendary residency in Cream brought dance music to another level in the era of the super club and his Perfecto label and its various offshoots created some of the biggest and most influential tracks of the 90’s and 00’s.

We sat down with this icon of dance music to talk to him about his career and his current projects.

Mike Mannix: We spoke to Danny Rampling in the last issue about that infamous trip to Ibiza in 1987, can you believe that it was 30 years ago?

Paul Oakenfold: It’s really weird because I certainly didn’t think I’d be sitting here 30 years later talking about a holiday I went on that kind of blew up and shaped my life!

It’s strange how one trip can have a dominant effect on your life, because of that trip everything started for me in music really?

MM: It was quite a pivotal moment for yourself and the rest of the lads and for the scene that was spawned after it with this monster of a youth movement developing from it. Was it a shock to you just how quickly the scene that yourself, Danny, Nicky Holloway and Johnny Walker imported back from Ibiza to London exploded?

PO: Yeah, it was. I remember I was working for a company called Rush Release and I was really going to clubs all over England as my job was to take promos to DJ’s. Back in those days, you could mail them to them but you’d call them and go to their club on a Friday night to bring the hottest new records, hang out and try and get to know them so they’d play your records. That was kind of how the relationship worked at that time. So I’d be going to clubs, stand at the bar, have a beer, talk to people and look at a few girls. No one was really interested in the music, no one was looking at the DJ, and a few of the girls would be dancing around their handbags.

And then, of course, you come back from Ibiza (laughing) you’re standing there in front of the DJ, you don’t want a drink, you’re dancing your tits off and all you’re doing is listening to these records and going “That’s great, I’ve got to get this, I’ve got to get that”! And now

we cut to 30 years later and kids are still doing the same thing, it’s just they’ve got a phone in their hand now!

They’re still looking at the DJ, watching them, listening to the tunes but just jumping up and down with a phone! It’s weird how that whole thing has exploded, as you said, it’s become a monster, it’s worldwide now.

MM: Will there be any 30th-anniversary celebrations with Danny, Nicky, and Johnny from that initial summer in Ibiza?

PO: To mark the anniversary, I’m going to do a pop-up residence in Ibiza which I’m really happy about. It’s going to on Wednesdays during August in a little venue. I’ve gone back and asked Nicky, Danny, all the boys, Nancy Noise, Trevor Fung, Alfredo, all the original guys. I said to them

“What we experienced, what we saw was amazing. We were very lucky to be in the right place at the right time so why don’t we play those tunes and try and recreate in some shape or form that spirit and energy through that music and share it with people who’ve maybe never been in Ibiza or are too young to have been to the likes of Amnesia or didn’t know what was going on

So we’re gonna do that, just for the four Wednesdays and I just think it’ll be a really good thing to do. I mean, you can go to any club in the world and hear the latest tunes but for one month only you can come to Pikes Hotel, which isn’t known as a club and only holds 250 people and you can hear these tunes that really left a lasting mark, not just on us but for a lot of people when that scene exploded. So we’ll see how that goes and then I’m going to release a Generations compilation of these tracks over the 30 years that shaped electronic music for me. Tracks that were important for me as I went through this journey.

MM: Was that the inspiration behind Perfecto?

PO: The inspiration behind Perfecto came because there was no label releasing electronic music at the time. People kept coming to me and asking where I go to release this music that they or their friends were making. There were producers popping up who suddenly started making records and would bring them to me to play and I thought let’s get an infrastructure and a set up where we can start releasing this music and it snowballed from there.  The label’s been going for 26 years which is unbelievable considering I’m only 35!  <Laughs>

MM: My first real exposure to your production work was when you remixed ‘Wrote For Luck’ by the ‘Happy Mondays’ and then the ‘Rave On’ and ‘Halleluiah’ remixes which totally blew me away. You obviously went on to produce the classic Pills ‘n’ Thrills album, how was working with them, it always seemed a brilliant creative combination to me?

PO: It was quite an interesting way that I came across that band. A couple of them used to come down to London and go to some of the clubs I used to do, Spectrum, Land of Oz, Future. So I got to kind of know them through that. Spectrum and Land of Oz were more Acid and House but Future was alternative and I would play alternative rock and they would come down and that was where the relationship started and I was approached to remix their tunes through that.

What was wrong with Indie music when I was playing it in the clubs was the rhythm. It was all live drums and you couldn’t really mix it as a DJ

It was always a traditional drum sound, it was never attacking big phat drums that would sound awesome in a nightclub.  When I got asked to do it I said to them, “Right, I’m gonna bring in more of a rhythm and I’m gonna make it danceable.” So I did that and the management and the record company,

Factory Records freaked out and said that was exactly what they were looking for, this strong tougher sound that really represented what was going on

And that was when I got asked to do more remixes and produce the album, go to LA with them and our relationship just grew from there I suppose.

MM: Any regrets that you weren’t able to do the follow-up, Yes Please, with them given how those sessions ended up going?

Pills ‘n’ Thrills was huge for me. I’d never produced a band, I’ve got the band plus the manager to deal with and the manager was crazier than the band!

Before you go into the studio you get demos, you listen to the demos and you make base your opinion on that. When I asked to hear the demos for Yes Please, they weren’t there and that was really worrying for me.

So I was like they are going to the Caribbean where they ended up with Chris Frantz and Tina Weymouth (of Talking Heads) with no demos in this place that’s going to be really hard to keep them together with all the party stuff that goes on around it, and it’s gonna all fall on my shoulders as the producer. So there are two record companies with Factory and then Electra in the US and the management to deal with and I was like I’m just gonna set myself up for a fall here and that’s why I declined.

If there’d been demos then, of course, I’d have done it but there were too many drugs going on and I didn’t feel it was gonna work, I could feel it and that was my worry

MM: Around that time you had a very eclectic approach to the artists you were working within comparison to a lot of producers in the House scene. In addition to the Mondays, I’m thinking of your work with Massive Attack, even U2. Was that a conscious thing and did the Balearic approach of DJ Alfredo influence you in that?

PO: I mean, Alfredo was a big part of what was going on from back in Amnesia in ’87 but when I was working with Massive Attack and U2, that was a bit later in the early 90’s and I don’t really think it was Alfredo’s influence, it was just what was going on.

MM: You were very much the face of the label but those of us buying the records would always have seen Steve Osbourne’s name alongside yours on production duties. How important was that collaboration for you?

PO: Steve was so important. It was a really great understanding in terms of production and the relationship we had and when it came to understanding what works in a club and what doesn’t.

I learned a lot from him (Steve) also, he’s a great producer in his own right so our collaboration worked really well

MM: How different an experience is it DJing now compared to 30 years ago, both in terms of the crowds and your own experience, you’ve just come back from a gig on Mount Everest which is different?

PO: Yeah, we did a charity show up there and raised some decent money which was good. DJing has changed a tremendous amount now, I still love playing and sharing music but it’s a very busy lane these days, there’s a lot of people doing it.

MM: What advice would you give a DJ or producer in this day and age considering how saturated it is?

PO: You have to focus on yourself. What I mean by that is that

a lot of DJ’s or producers just follow trends, what’s happening, what’s new. You need to just do what you do and focus on being the best at what you do and your time will come

MM: You’re now involved with Isina, the talent spotting and development mentoring programme. Can you tell us a bit about that?

PO: The idea is to help and support new talent and that’s really what we’re all about. I think when you get to a certain age that’s what you want to do. Whether I find it for my label or another label then great, I’m in a good position to shed light and give something back so why not.

MM: Are there any up and coming DJ’s and artists that have recently caught your attention?

PO: At the moment, some of the things I’m excited about are ‘Little Nikki’ who’s a female singer out of London and ‘The Ways’ which is a group out of Cleveland in America. They’re kind of my two favourites at the moment that I’d recommend.

PO: I’ve got a compilation out at the moment called ‘Dreamstate’ and then the ‘Generation’ compilation comes out in June which we’re also touring. And obviously back in Ibiza in August!