The Italian Factory was one of the most successful club brands in Dublin city in the 00s that was operated by brothers Marino & Luli Rispo with business partner Gio Paolella who’d moved from Italy in the late 90s looking for new opportunities. They literally promoted their home style and connected with the Italian and Irish community in Dublin and built their extensive team around them. Without doubt one of the best nights out that I got to enjoy many many times!! 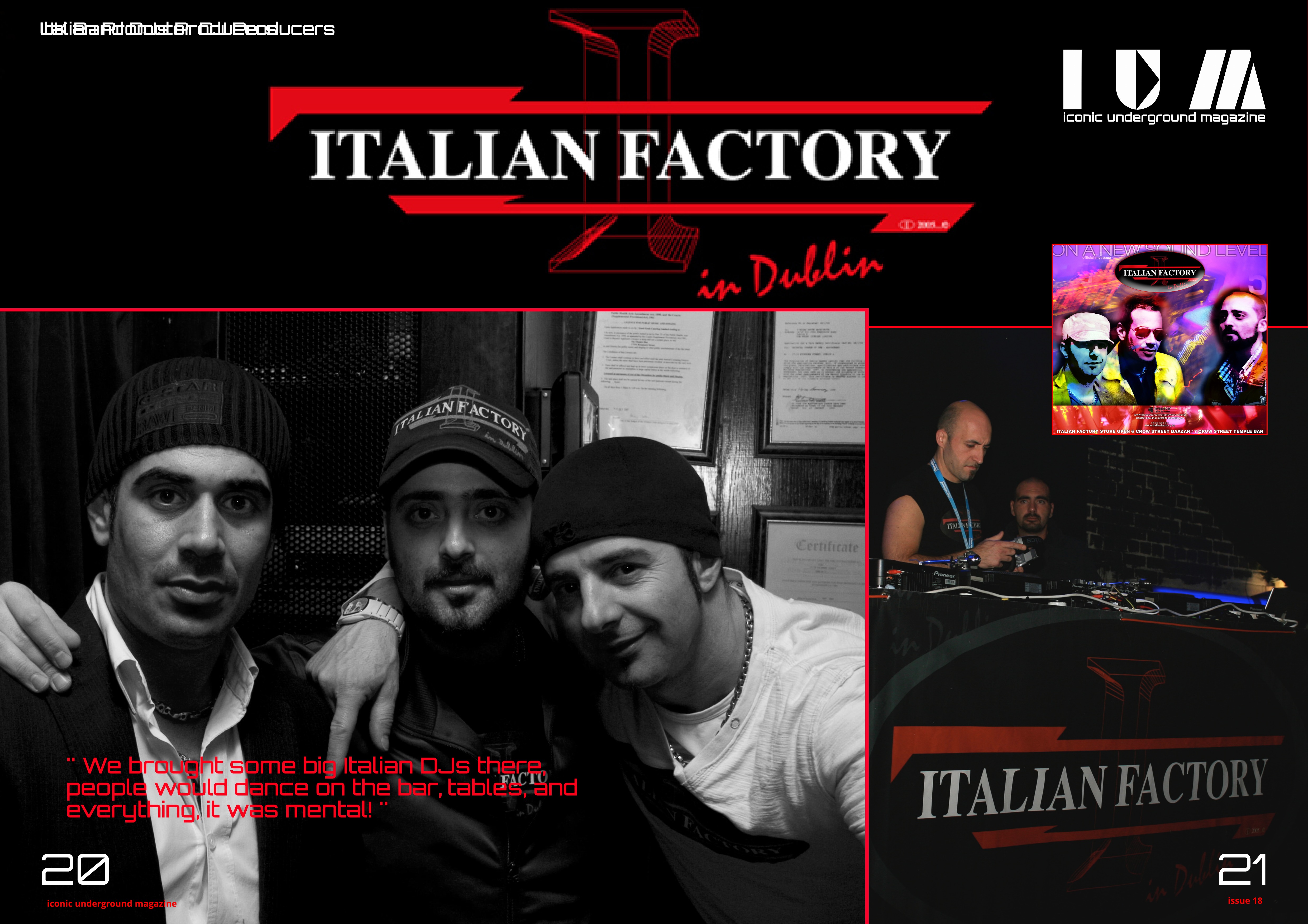 Mike Mannix: How did you start with the Italian Factory in Dublin?

Marino Rispo: We all have the same background in terms of clubs and clubbing in this business. I was a DJ in Italy and I was getting involved in many parties as a DJ but promoting as well. Especially when you’re a young DJ you ask for help in terms of promotion. When me and my brother Luli arrived in Dublin in 1998, we saw huge potential, the vibe in Dublin was unbelievable and in 2003 we decided to create something. It was very hard, as Italian, to find trustworthy people to work with. As you know you don’t get money from the bar so we had to spend a lot of money ourselves. When we arrived there were no midweek parties, and we’d work in restaurants during the day so we couldn’t go partying during weekends. This is from where it all started.

We brought some big Italian DJs there, people would dance on the bar, tables, and everything, it was mental!

MM: What was the first party called?

M: It was always called The Italian Factory. We contacted my brother in law Michael Nardelli  that was involved in a party, but he opened his own business and was doing graphic design, websites, social media like Myspace, etc and at some point, he started helping us with our image if I can say it like this. He gave us the idea of our name. He was like “listen you’re in Ireland, you’re Italians, try to bring your own style!” So we did, and these guys became our resident DJs, Dr.Flamer, F.Experience, DJ Cappy, Latronix and myself. Live O’Gio Vs Mc.Montana. 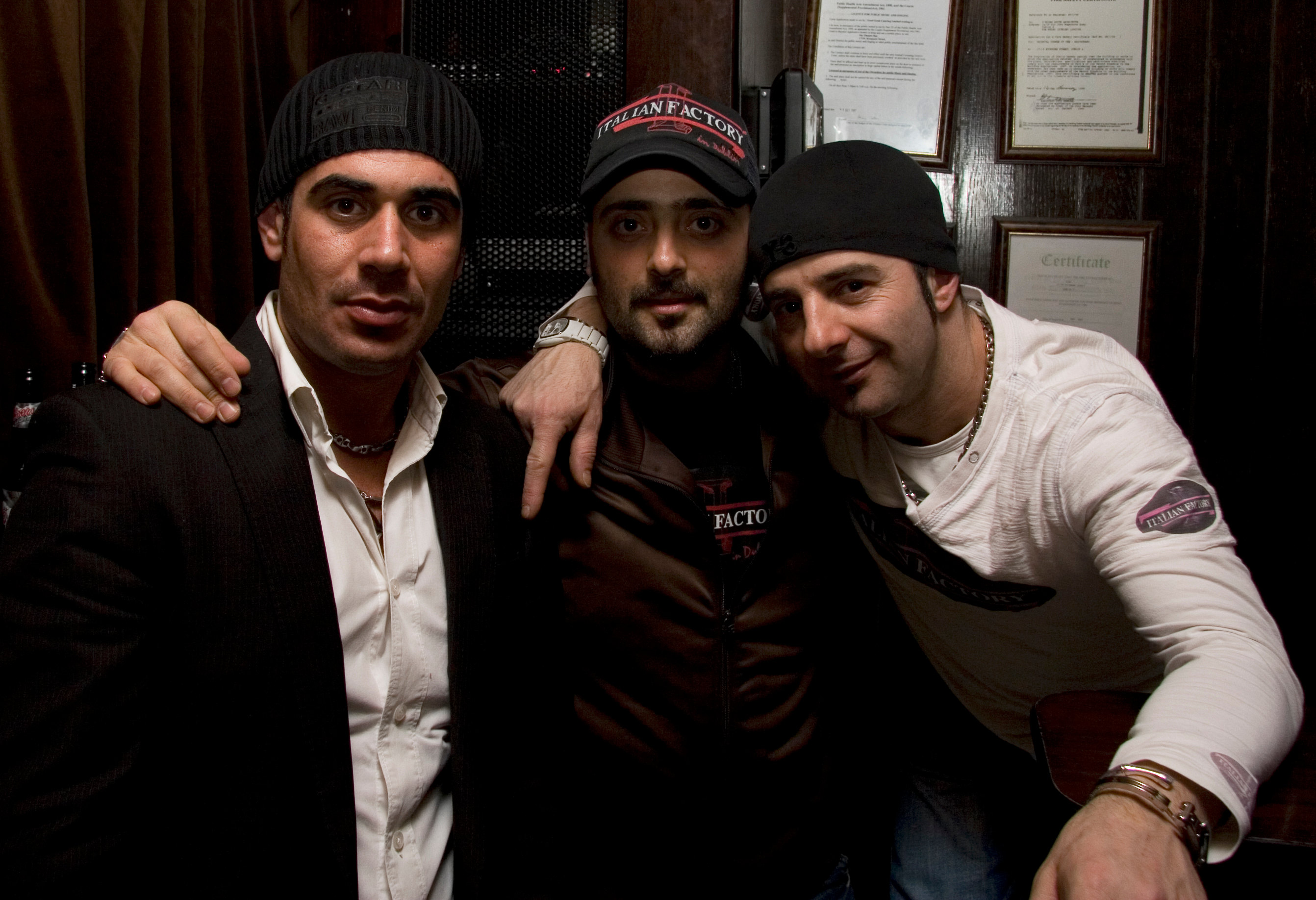 MM: It was such a good name! The name stuck and I started to hear it around and one of my friends Sharon Mchugh dragged me there and it was brilliant! That was at Sin.

M: Oh Yes! Sin was our trampoline and Mischief, it was a cheaper version if you want. It was pure freedom there, it was a 3-floor club it was brilliant and now it is called the South William. We brought some big Italian DJs there, people would dance on the bar, tables, and everything, it was mental!

MM: How quick was it for you to take off?

M: Very quick, the first party was in Mundo, now it is the Super Queen, and it was very big, like 2000 people capacity so the crowd would be too dispersed around. The 2nd party, we did Spirit, I remember they gave us the chance to do a party between Erick Morillo that was the 26th and the 29th of December. The guys from Spirit didn’t believe we would bring more than 100 people, but we packed it with 500 people! Me and Mauro Quinto [Dr. Flamer], we couldn’t believe it as well! And from that, everything went well, the crowd was happy, the atmosphere was good, we knew we had to keep going. 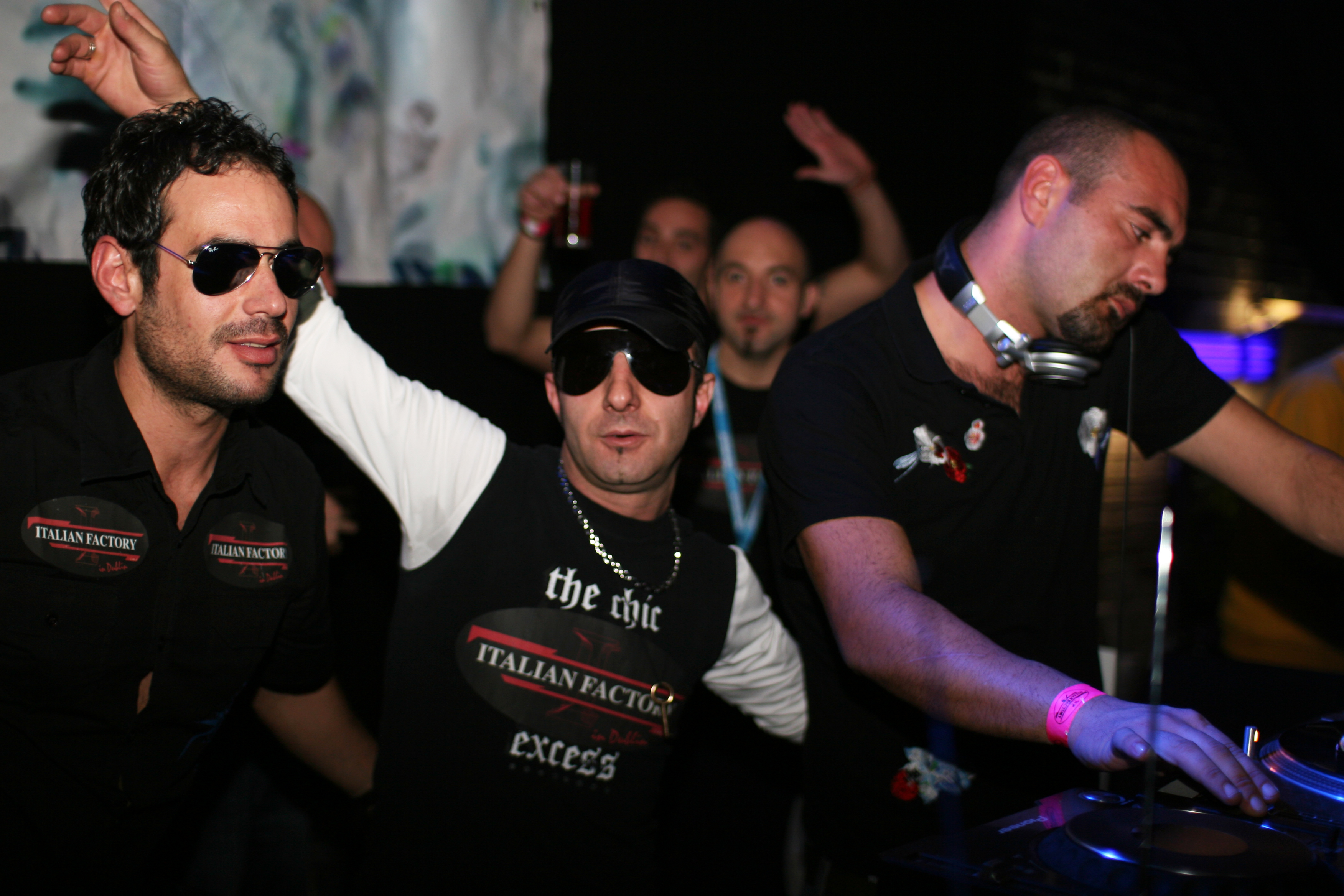 MM: What happened after the launch of Spirit? Tell us about the collective, the people involved at the time.

M: Anyone that was full of passion if you want, Mauro Quinto [Dr. Flamer] was closely involved as our resident DJ as well as being our sound engineer. It was like a big family, if you could take pictures you became the photographer, if you could play you became a DJ, etc. We had so much energy. The 3rd party was in February in Temple Bar, The Hub, we survived with the money from tickets and nothing else so we had to sell as much as possible. We became a monthly, every 2 month kind of event.

At the 2nd event, we got involved with Shay Hannon who at the time was he was playing on Spin Radio, we met him when he was a resident in The Kitchen back in the day. Which gave us a bit more visibility in the scene. I don’t know if you know Giovanni he used to play drums for us. He was our drummer forever, every time we would play at a festival we would bring him. We’d mainly stick with the Italian community but accepted anyone really and it was great fun. 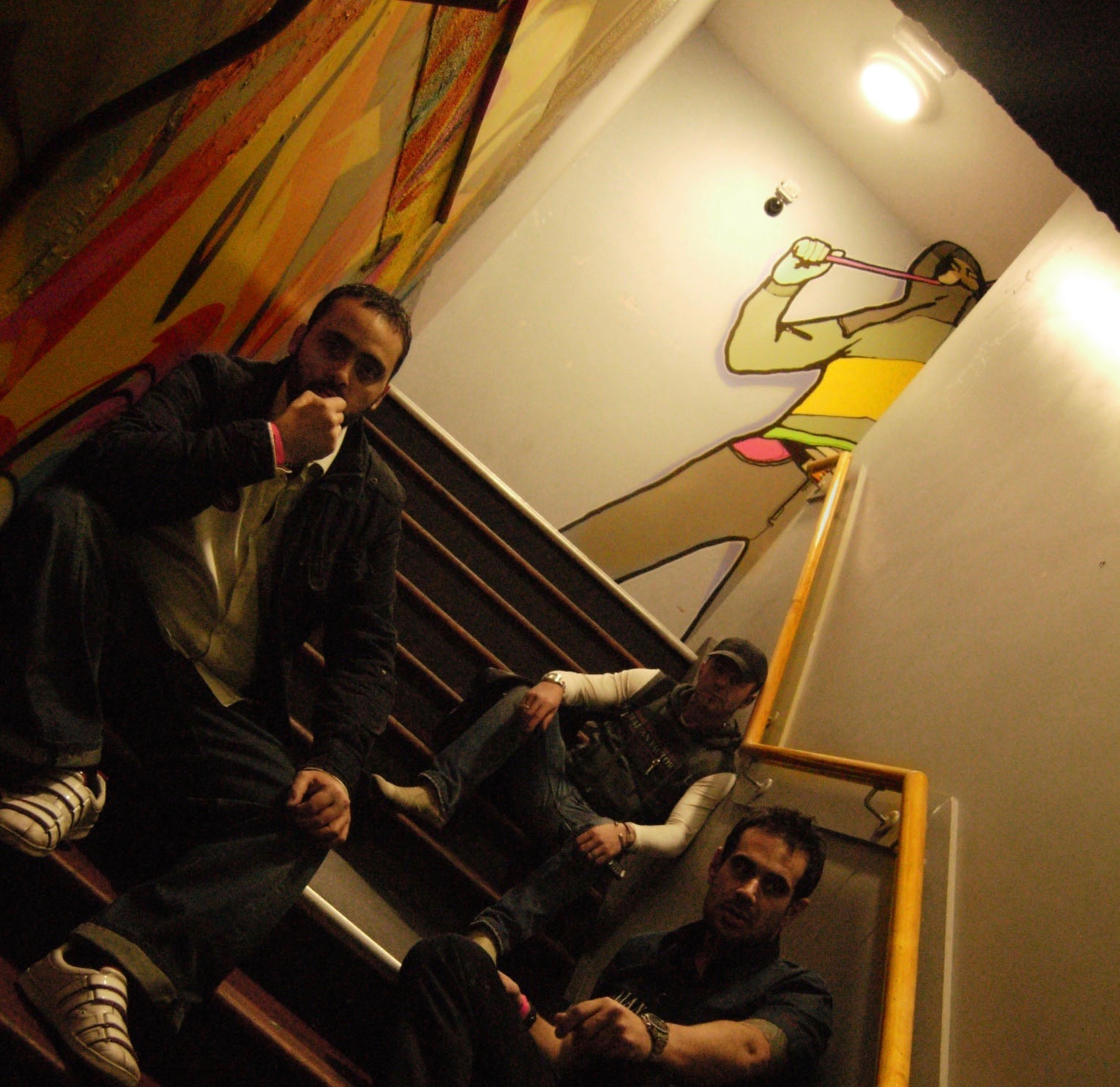 One of our resident DJs, Ana, D-Joy was a waitress in the place we worked in, and one of our best friends was the manager of Cocoon, and he would give us the place for free, so we felt that something was finally coming back to us. To be honest, at that stage, we didn’t have any labels we just wanted to organize good parties.

After Cocoon, we were very stubborn, because we could have kept Cocoon, but it would have become boring at some point. So we decided to go to Sin, in 2005, we organized 2 events there, and we ended up having a really bad situation because they didn’t give us our money as promised, they were saying that our crowd are people that just take drugs so they don’t consume at the bar, etc. Club owners can be very greedy, we put so much energy, work, money, etc so we left this place very bitter. And that was our last party there.

MM: So you had only 2 parties at the Sin?

M: That was in 2005, it went bad so we went to Mischief, and this very good Irish DJ Sian, he used to sell records in Carbon and he told me he booked a few parties in Mischief and if I was interested we could organize something there. We stayed there for 6 months, celebrated our anniversary and it closed down for a year before it became South William. But through Mischief, we really started to have a reputation so Sin called us back because they fired the manager with who we had a problem with. The new owner wanted us to try at least one event, and because they were closed during summer and it was already Spring we could do 2 maybe 4 parties maximum. But after that, because it was going so well, the owner proposed us to come back in September.

We had 7 parties there, and to be honest, they were all good apart from one night where it wasn’t too busy because Carl Cox was playing that night in a castle!

The Italian crowd was our base plus the usual mixed crowd so a bad event was 300 people for us, on a Wednesday night. But again, we had our daytime jobs so we didn’t feel the pressure. And because it was Celtic Tiger people had money to spend, as a chef we had good wages, the rents were so cheap. Like I was leaving in Temple Bar for 900€ for 2 people.

It was going so well in Sin that Spirit called us and asked if we wanted to do our party on Sunday nights. We said no at first, they went mad but they didn’t want to pay us even though they were the ones that contacted us. They wanted to use our name so we’d agree to do it only if they pay us. It was challenging because even with 300 people the place looked empty. We had 7 parties there, and to be honest, they were all good apart from one night where it wasn’t too busy because Carl Cox was playing that night in a castle! 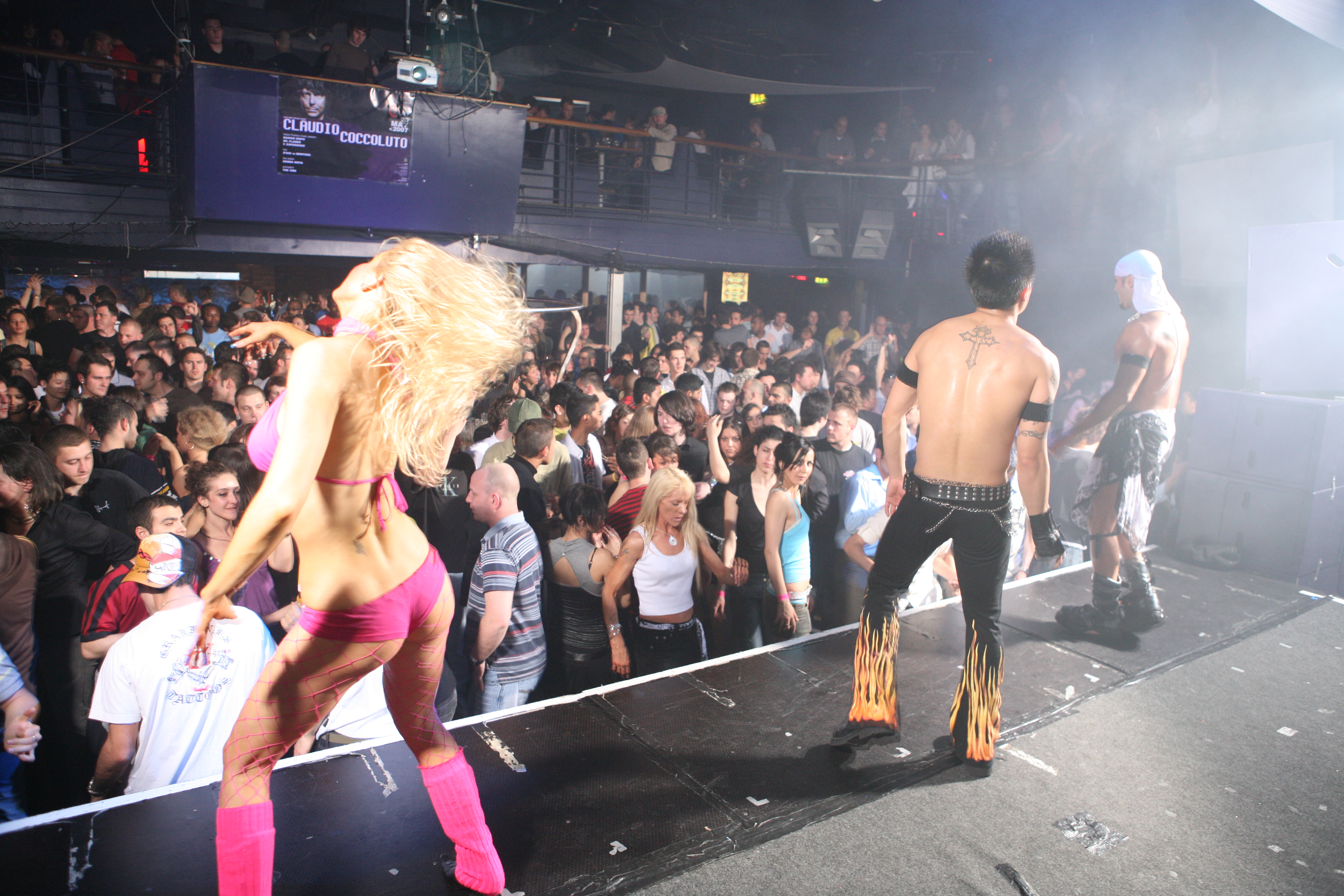 After a while, Sin changed management again so the deal we had was over. The new owners wanted us to rent the place for 800€. So from getting paid we got asked to pay! After that, we had a few parties in Zanzibar, next to Yamamori. We had really good events there, but by then the Italian Factory had become a business when it shifted from just fun we opened the shop. It was located in Temple Bar selling T-shirts, records, and event tickets, it was also the office. When we’d bring a DJ over, we would buy some records for the shop so people would know who the person is, it worked very well.

MM: So you got into Ibiza, got nominated for an award, and set up Italian Factory TV?

M: Yeah man, we had 2 events there, but once we didn’t go because we got a notice on Friday for Sunday so we couldn’t make it. The guy forgot to tell us! So many Irish guys that were in Ibiza this week called me, my phone wouldn’t stop ringing because everyone wanted to be on the guest list. Summer 2008 was the first time we went in Ibiza, and Jo Mills called us saying “Look, there’s not much money, the club can’t buy your flight, but if you have 10 people on the dancefloor when you’re playing, this is what the club is looking for.” 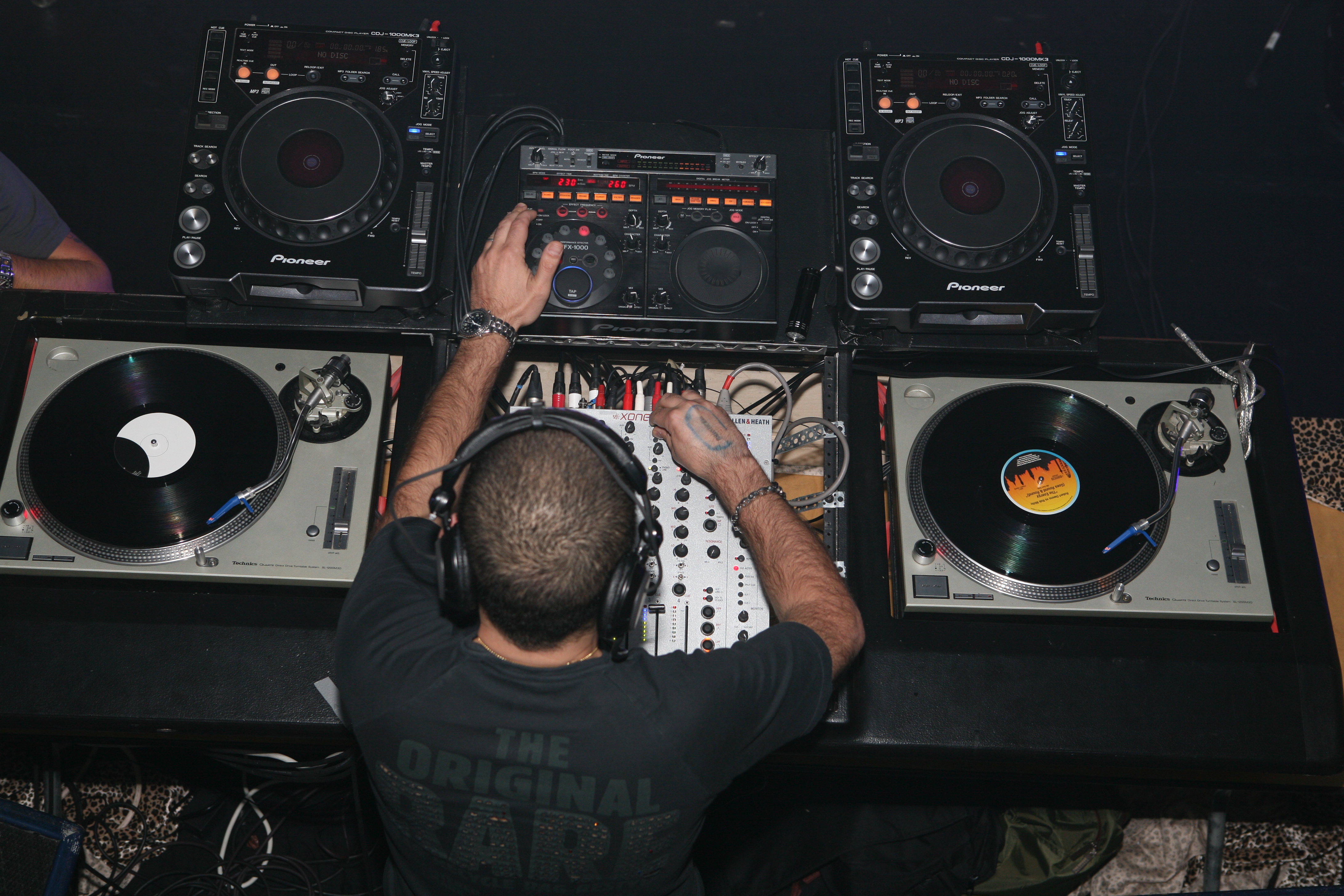 It was a very good opportunity for us because after that Planet Love called us, and Trinity Room in Limerick. Planet Love was in a club in the Docklands, pretty big, but it was a bit strange because it was hard to create a good vibe, it was divided into 3 small rooms. We had a few parties there, but the guy lost a lot of money because he booked Trance DJs in one room, us in another so it was a massive cost to him. After that, we had Mistic in Carlow inside a big farm and one of the guys there was organizing Irish Dance Music Awards, we even got nominated but didn’t get the award.

An Irish friend of ours brought a girl that was studying to become a journalist she was great and that’s how Italian Factory TV started from that, so we’d film and interview some of the big names we brought over, it was great.

Fernando invited us to play on the Body Tonic stage at Life Festival as well but it was more towards the end for us. 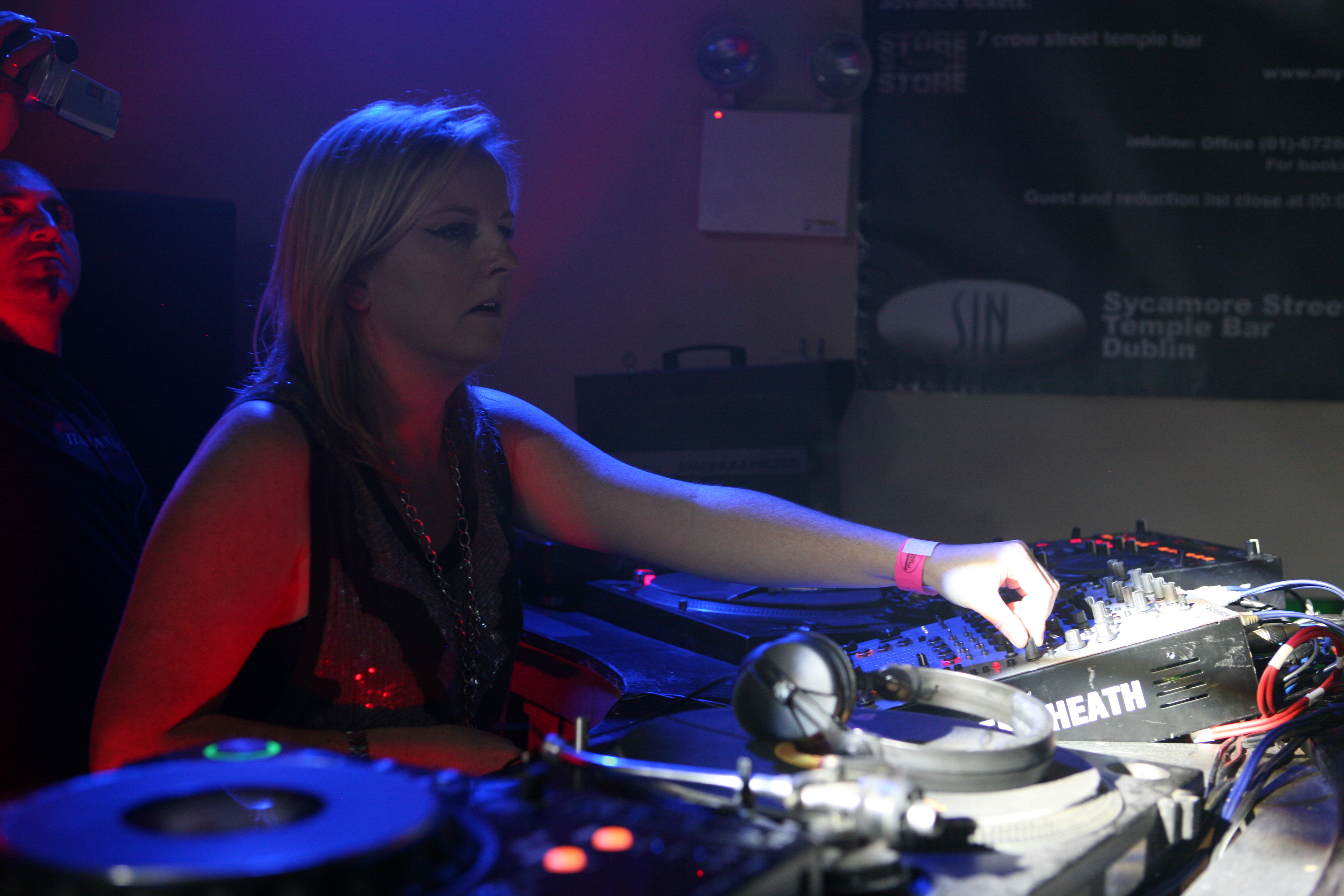 MM: What could have happened if the crash hadn’t happened? There was really good energy behind the Italian Factory.

M: Yes I miss it sometimes man, so many things happened, people started to leave, people lost their jobs, the economy was just too bad. I started to not being able to pay my rent. The party was getting bigger but the team was constantly changing. It was hard to manage the team, and you know Italians are the first the support you but the first to leave as well. The team was demotivated, and even if 20 people would show up I had to deliver the same kind of service, so it just started to fade.

We had a real brand it was amazing!

For our last party, we booked a very good DJ, Uto Karem, we had 70 people and I felt that it was it. We stopped and organized a Sunday night in Pygmalion, something in Spy, just for fun you know and it was the end. If we didn’t have the recession, the team would have stayed as passionate, but I don’t know what we would be doing now if all of this hadn’t happened. We had a real brand it was amazing! After a while, we stopped during the winter 2009/2010, we had a great run at it and made our mark on the Dublin clubbing scene so I’m proud of that. 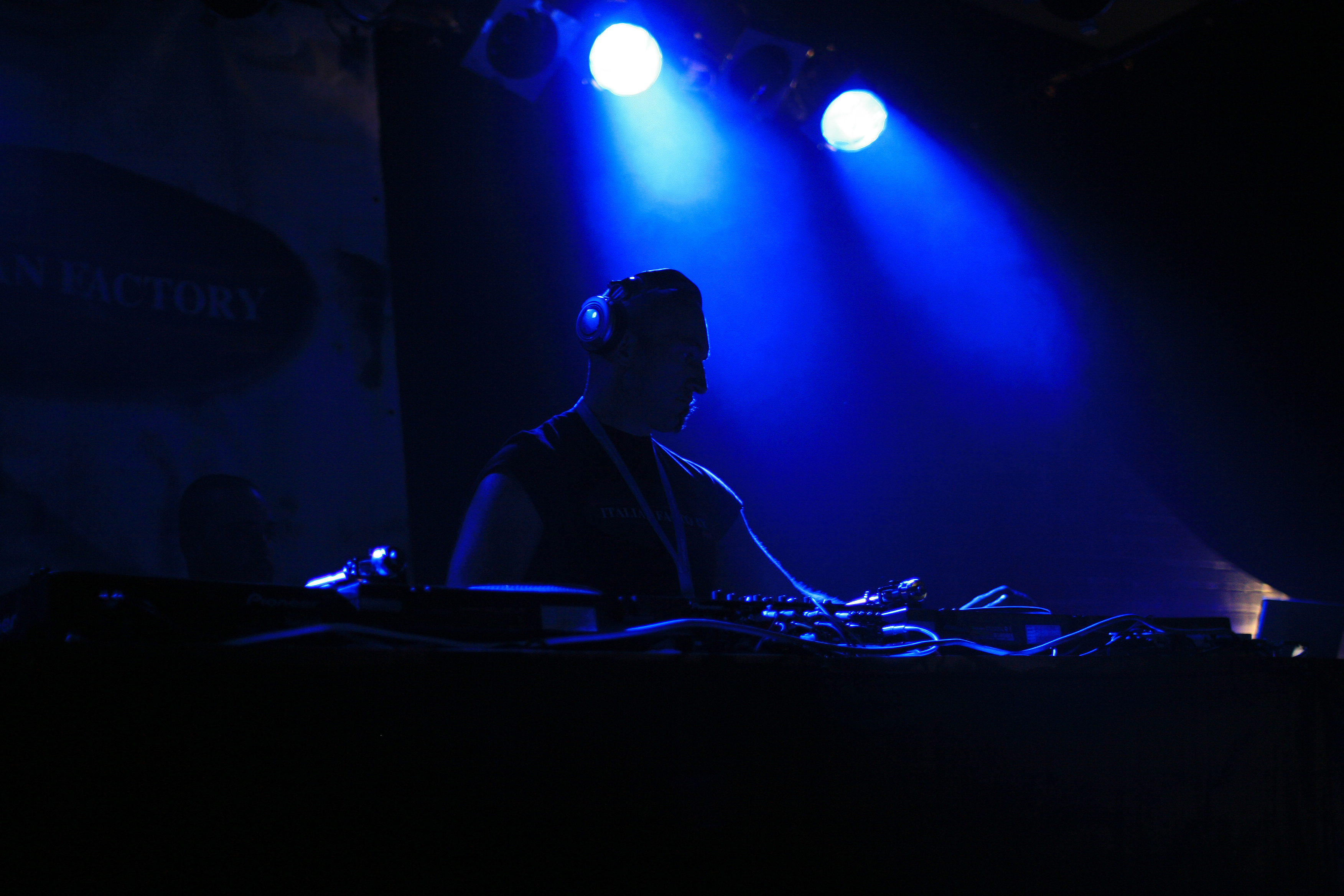 M: Thank You, Mike, for this opportunity