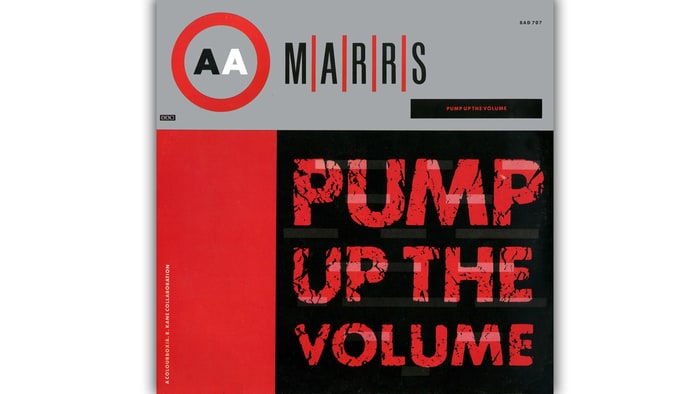 Following death of the song’s co-creator Steve Young, this is a look at how a niche DJ record infiltrated the mainstream.

It’s only logical that a landmark of musical cut-and-paste would have gotten its start thanks to MTV. In the spring of 1987, the music video network was about to launch in Europe and hired London dance DJ Dave Dorrell to compose music for commercial bursts. He told authors Bill Brewster and Frank Broughton that his job was “to put as many edits into 15 seconds as possible.”

This would be the impetus for one of the most important records of the 1980s: M/A/R/R/S’s “Pump Up the Volume,” a hit in the fall of 1987. Concocted by Dorrell and fellow club spinner CJ Mackintosh along with siblings Martyn and the late Steve Young of Colourbox and A.R. Kane’s Alex Ayuli and Rudy Tambala, “Pump Up the Volume” wasn’t the first hit record to feature a prominent sample, but it was the first big hit to be made up largely of samples. Instead of a chorus, there’s just the title phrase, sampled from Rakim, over a beat that cribs from James Brown, the Bar-Kays, the Last Poets and the Montana Sextet, not to mention Public Enemy, Wolfman Jack and a fire engine.

M/A/R/R/S’ strutting groove and anything-goes drop-ins make the track sound both fresh and inevitable, a bedrock anthem. (Not everyone agrees: In 2000, a writer for Salon complained the song had “been played so many millions of times that hearing [it]yet again is more painful than nostalgic.”) In fact, “Pump Up the Volume” was essentially the pop crossover track from an era full of similar DJ-oriented cut-ups, many of them issued illegally.

In 1987, long out-of-print seventies funk and soul — known in the UK as “rare groove” — was the hottest sound in London. At the same time, it was beginning to be mined for hip-hop samples. You could walk into a New York record shop and see a wall full of 12-inches devoted to James Brown samples alone, from Afrika Bambaataa’s homemade “Fusion Beats Vol. 2” through Double Dee and Steinski’s landmark “Lesson Mixes” (one, two, three), to T.D. Records’ “Feelin’ James” (whose anonymous editor was the storied New York disco DJ Danny Krivit). In addition, 1987 saw both Steinski’s JFK cut-up “The Motorcade Sped On” given away as a flexidisc with an issue of NME, and the UK duo Coldcut’s debut, with “Say Kids, What Time Is It?”

Even the period’s top UK production team Stock, Aitken & Waterman — the men behind Rick Astley’s deathless “Never Gonna Give You Up” — made a track under their own name, “Roadblock,” that aped the trend and scored a hit with it. “Originally released in a generic sleeve with a minimum of information, ‘Roadblock’ passed itself off as a rare groove bootleg, thereby attaching both the romance of questionable legality and the authenticity of the old and American,” wrote Spin‘s John Leland. “The retro-funky grooves inside, which function as packaging as much as music, do nothing to dispel the misconception.”

“Pump Up the Volume” hit the shelves shortly thereafter, containing chunks of “Roadblock” and prompting Peter Waterman to file a pair of suits. (The version released in America removed the offending samples.) M/A/R/R/S also nodded at yet another cut-up — Criminal Element Orchestra’s “Put the Needle to the Record” (created by “Planet Rock” producer Arthur Baker) — by turning its title into their own hook.

To M/A/R/R/S’s surprise, “Volume” blew up instantly. “Before we knew it, it was a snowball,” Dorrell told author Sean Bidder. “4AD was getting phone calls … radio wanted to play the record and it hit straight into the charts … We knocked Rick Astley off, who was the biggest thing in the country. We went to number one [in the UK] and kept Michael Jackson off. We felt quite good that week.” “Volume” rose to number 13 in America — nearly as impressive, considering that U.S. radio was barely playing hip-hop, even in the wake of Run-D.M.C.’s massive crossover success, never mind house music.

And much as “Volume” owes hip-hop, it’s remembered as a dance record for a reason. The track’s hypnotic groove felt as close to the emergent Chicago house sound — J.M. Silk’s “Jack Your Body” had been a British number one in January 1987, while that October, during M/A/R/R/S’ chart ride, another Chicago classic, House Master Boyz’ “House Nation,” joined it in the top 10. A year later, New York house producer Todd Terry’s “Can You Party” (credited to Royal House), would become the basis of the Jungle Brothers’ “I’ll House You.”

“Pump Up the Volume” marked a turning point. Club jocks had made hit records before: Madonna’s “Holiday” had turned producer John “Jellybean” Benitez into, arguably, the first “superstar DJ.” But M/A/R/R/S’ hit was the first time a hardcore DJ record, one that catered directly to the dance floor, without any pretense of being a “song,” became a genuine pop hit.

It wouldn’t be the last. “I think it’s good that deejays are doing music,” Martyn told Spin. “I think they have a special knowledge that the rest of us humanity don’t have.” Dorrell added: “We [are]talking generation gap, now. There’s a generation that grew up in the clubs probably because of the death of the live [music]market. ‘Pump Up the Volume’ reflects that generation.”