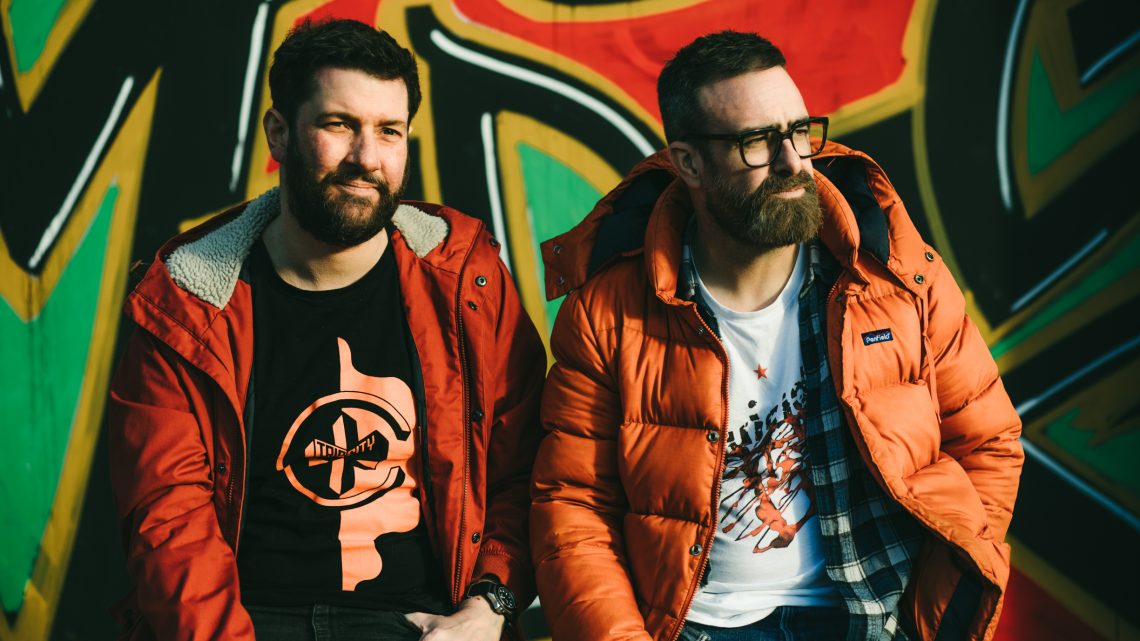 The Rise of Manchesters ‘Live On Acid’ Duo Exclusive Interview

Manchester has a rich and infamous history in the rise of Dance Music Culture in the UK. A hub and melting pot for a massive dedicated and clued-up underground scene that’s evolved over the last 37 years, influencing clubs, bands, and fashion around the world.

Rising out of this illustrious backdrop is a killer duo ‘Live On Acid’ who are stepping up and bringing a fresh take! Pay attention!

Mike Mannix: Nice one Matt & Anthony thank you for talking to us at IUM. Give some background on your early influences socially and musically how did you get into dance music, what pushed you into DJing and then production?

Matt: For as long as I can remember I’ve loved electronic music in one way or another. As a kid, I loved all the early eighties synth-pop acts like Depeche Mode, Tubeway Army, The Human League and Ultravox and then discovering Kraftwerk was monumental for me. In the later eighties, I’d become a bit of an indie fan but

and with a renewed love of electronic music started to obtain the tools to try and create my own.

Eventually, I bought a second hand Atari STe and had a basic version of Cubase and a multi-timbral Yamaha synth. It was a fairly limited set up so you had to do your best within those limitations but it made me realise you don’t need vast amounts going on to create the music that I liked and wanted to create.

Anthony: I grew up just outside the M25 and I’d gone to some free parties around London when I was still too young to get into a proper club – some of my mates had just started driving so we’d head out on a Friday evening and get back some time on Saturday morning.

Then I went to Cardiff for university and pretty soon got involved in putting on nights, discovered breaks and that scene and got into DJing from there (c.2001). I’d dabbled in some production through the 2000s then moved to Manchester in 2013 and basically didn’t do anything – no music or DJing until me and Matt started messing around with synths and turning it into some of our early Live on Acid stuff just over 2 years ago. 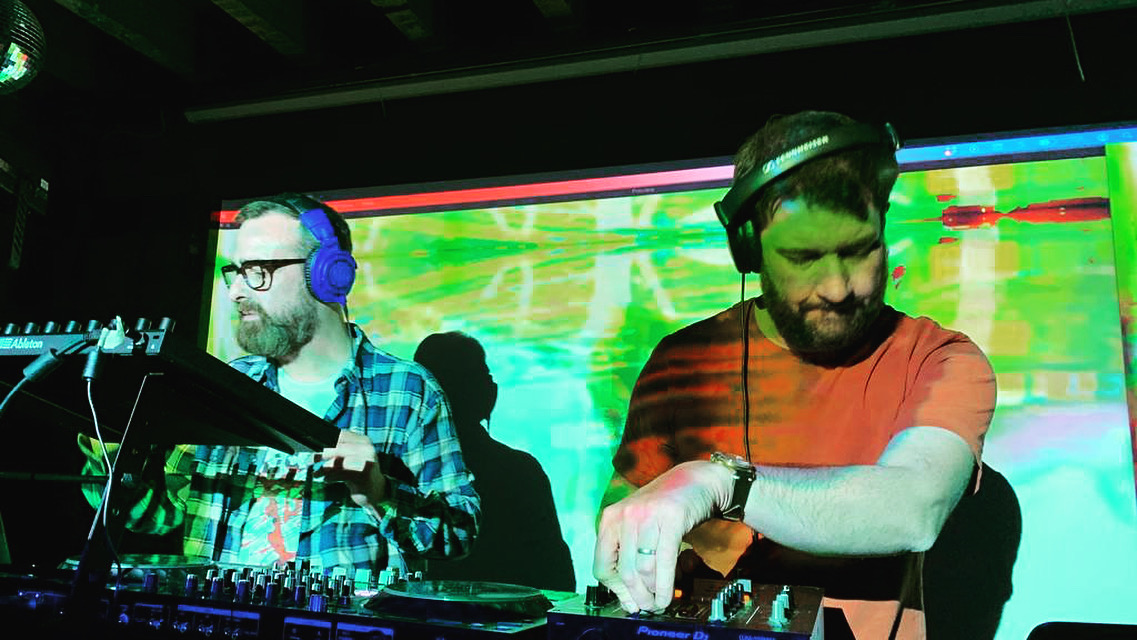 MM: What DJs / Artists / Producers are behind your ever driving passion for the scene, and who would you like to work with within the studio?

Matt: I was always

a big fan of whatever Andrew Weatherall was up to

and loved seeing him, DJ. It was always an epic journey with him and never 1 dimensional. I like what Soulwax have done too and again they’re not afraid to mix genres and take things in different directions. I’ve had a couple of really talented people, a drummer and a guitarist, offer to get involved with what we’re doing so it would be interesting to work with an outfit like Soulwax who’ve used live drummers and musicians in their work.

Anthony: There’s so many from both my breaks past and also just in consuming music since. Heavy influences on me and how I structure tracks have to be the Plump DJs and the others that were around that sound from 2000 right until now.

Separate to that I think Daft Punk have a big part in influencing both of us, Orbital as well – you can hear some clear Daft Punk and Orbital influences in our tracks – we just got a Roland SH-09 and the bleeps from that are pure Orbital. More recently I’ve been loving what Bicep are doing, Kink, Gallegos, Desert Sound Colony, Dusky, Bonobo – a lot of what I love in Electronic/Dance music is hard to pigeon-hole – and I guess our sound is the same.

– not that this is a dig at the many great artists on the scene now – but it’s a lot tougher, faster and techier and that’s not really our sound!

MM: Walk us through the usual process of when you are in the studio creating your new tracks from the plugins/analogue outboard, midi, samples and DAW you use and why. What is key in the whole production process?

Anthony: Everything starts in hardware – Matt has his own gear at his flat – so one or other of us will have had the genesis of an idea just as a 1-4 bar loop. We’ll mess about from that starting point, and

if we’re still bobbing round to it in the studio after the 400th+ time of hearing the same bar then we assume the track will have some legs on a dance floor!

I think that’s the magic – they are simple tracks and everything you are hearing has come from some external bit of kit (except for vocal samples). We’re not snooty about if music is made on external gear or in a laptop – but that’s the set-up that works for us and inspires us.

Then from that initial loop, we record each of the parts separately into Ableton’s session view and get them sitting really tightly together (sonically, not always in terms of timing).

The arrangement usually comes together pretty quickly from that point. In terms of kit my main go-to’s in the studio are Elektron Digitakt (for drums and MIDI-sequencing), DSI Mopho (if ever we get stuck on why a synth isn’t sounding right we play it on the Mopho and it usually gets 10x better) and for “Acid” the Acidlab Bassline 3 (a German 303 clone), other synths include the Moog Sirin, Roland JDXi (our pads/strings usually come from this but it can do it all).

Since finishing the album we’ve added a Roland SH-09 and a Din Sync RE:303.

We do have some hardware effects/tooling but mainly any compression, saturation etc is done on plug-ins. We’ve got a fair few UAD and SSL ones but also the core Ableton plug-ins are incredibly powerful and useful. There are another couple of free plug-ins that really help define our “sound” –  I’m going to keep quiet on what they are though!!. Special mention to Arturia’s plug-ins too though, especially their filters. 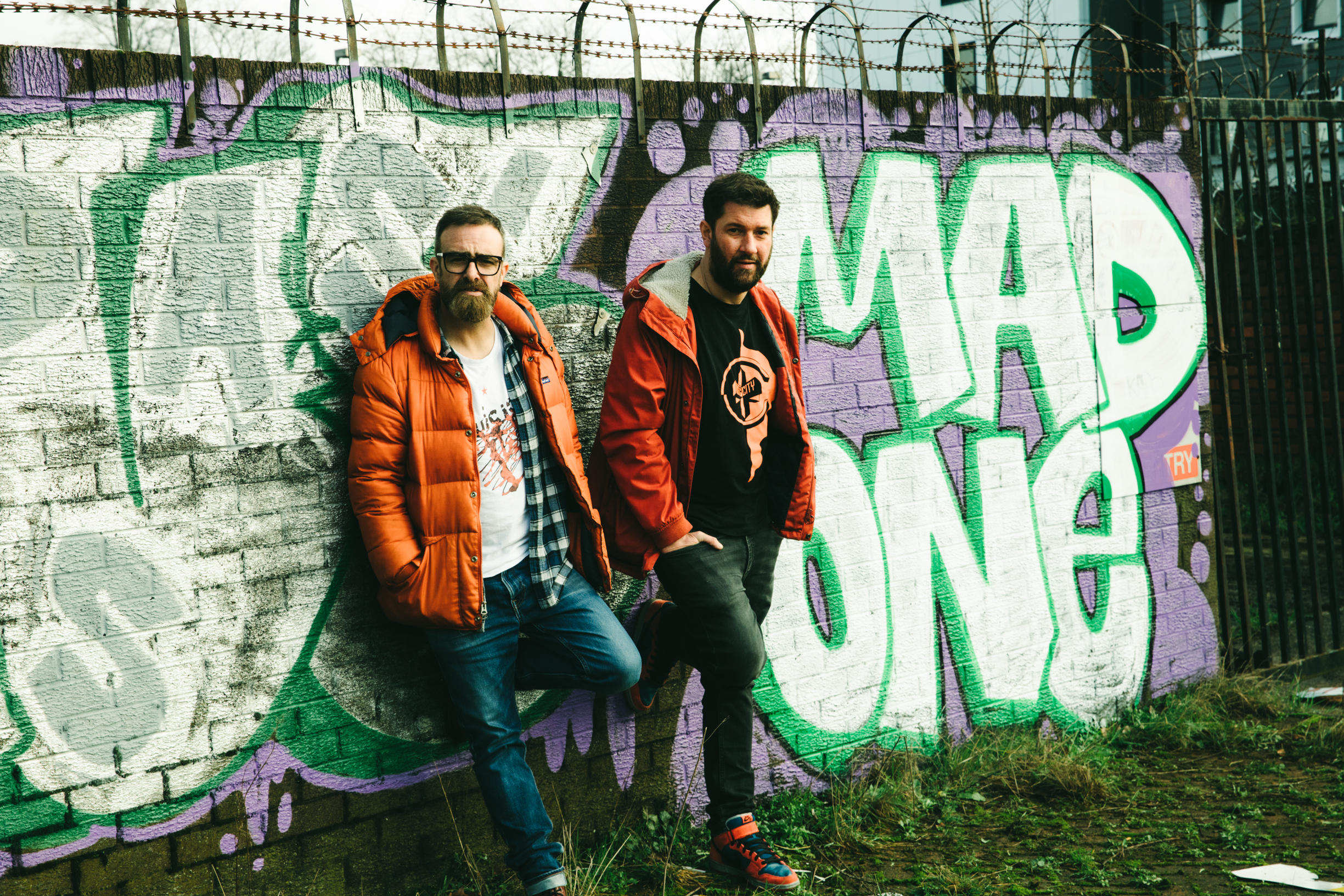 MM: Tell us about your absolutely fcking banging new album ‘Preaching to the Perverted’ and how it started?

Matt: The album is aimed squarely at the dancefloor and has elements from across the board including House, Disco and Breaks with obviously a bit of Acid in there too. It’s just over an hour long and flows and builds nicely as a mix, something you could throw on at a party.  We like to think

Anthony: I think it started because we had a body of tracks that had come together into a demo – maybe about 9 or 10 at that point – and whenever we played it to anyone they were like “loving the album” or something similar. I think then we started to realise that because

So I did a loose arrangement (as a continuous mix – which is the way that it’s meant to be listened to) and sent it to Matt on Soundcloud. I think we both listened to it a lot, shifted a couple of bits about it, added a track or two and there it was.

Simon Shackleton (Elite Force) mastered each individual track and created the final version of the continuous mix for us and I think that is what gives it the final coherence and polish. Add that to Jem Panufnik’s incredible Acid-Blotter artwork and the whole thing just hangs together as a piece of work that we’re incredibly proud of. 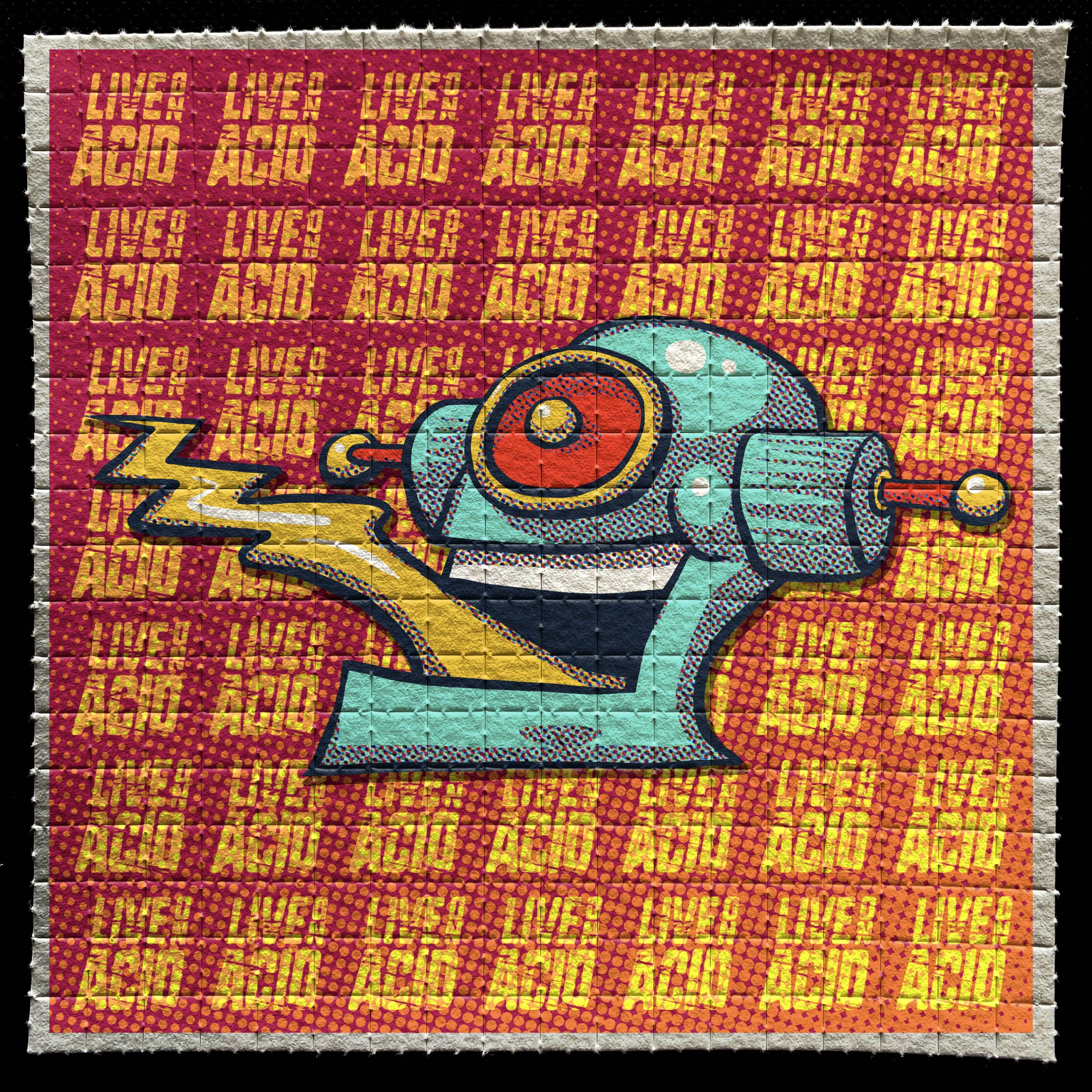 MM: What were the biggest challenges you faced in the creation of the album?

Anthony: I think it came together incredibly easily – you hear about people with 100s of unheard/un-finished tracks and whittling it down to a few for an album we didn’t have that – we’ve probably discarded about 5 tracks as ones we don’t like or aren’t up to scratch and 3 or those were ones we wrote before any that made it on the album.

So it was really just about getting those ones to sound as polished as we could (polished to our mind – I think some of the frequency interactions we love offended Shack’s [admittedly incredible]modern mastering ears though and we had to push to keep some of the high ends in stuff like Lorem Ipsum), and then working out the order that they should sit in.

MM: How do you see the underground scene in Manchester (UK) today progressing and where do you see it evolving?

Matt: There’s some great stuff happening in Manchester these days.

Two top venues have opened in recent years, The White Hotel and Hidden.

They put on some really good nights and it’s great to see people at these places where it’s all about the music. They’re a little off the beaten track and not right in the city centre so they’re the sort of place you have to want to go to and not just fall into on a night out. 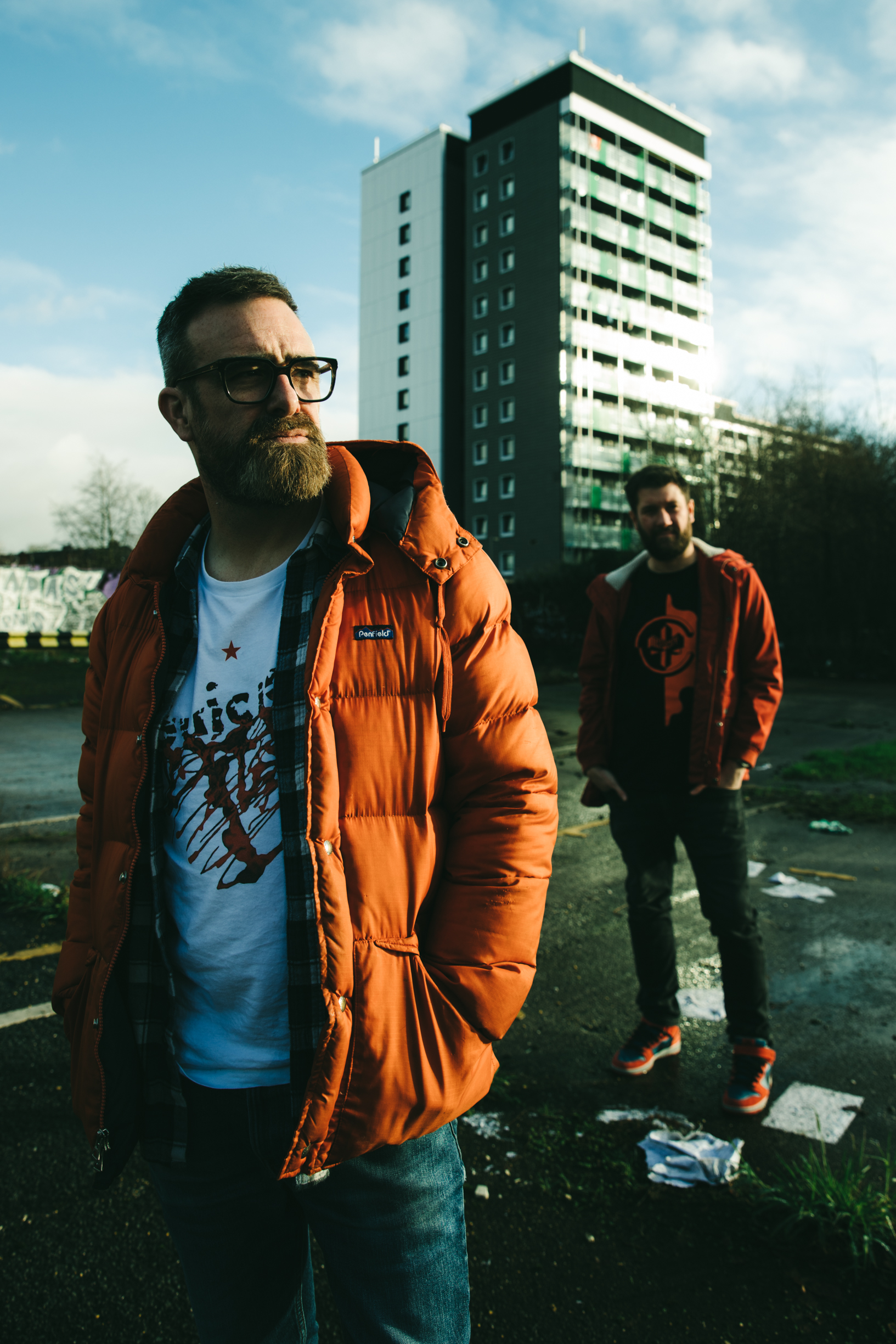 Anthony: I think there are some exciting smaller venues and smaller festivals around here that I love. The Warehouse Project when it is on is a blessing and a curse – it keeps Manchester front of mind for Dance Music and raves – but for those 3 months it’s on it drowns out some of the good, local smaller stuff that happens.

Just good people having fun in gritty surroundings – hopefully to incredible, locally-made music. The one constant in every era since the 1960s is the North West produces incredible and enduring music scenes that absorb, assimilate and enhance their influences.

MM: What are the next planned events and projects?

Matt: Aside from promoting the album and hopefully getting some gigs off the back of that, we’ve got a handful of projects on the go with regards to production. We’re working on new music including some remixes and we have an EP finished which we need to get signed/released if possible; a couple of the tracks from that have been played to a select audience and are already getting a little bit of hype.

The way we work seems to be evolving but the overall sound is still very much Live on Acid.

Anthony: It’s been such a funny time the last few years so we’ve only played one gig so far (the Eagle Inn, Salford in December) – we’re hoping to land more live and DJ gigs off the back of the album and music. Possibly even some Hello World label nights later in the year. It would be incredible to have a slot at a festival like Moovin’ or Bluedot that is local to us and that we go to each year anyway – so if anyone is reading this and can make it happen then get in touch! That said we’d love to take our sound and our music further afield than Manchester too –