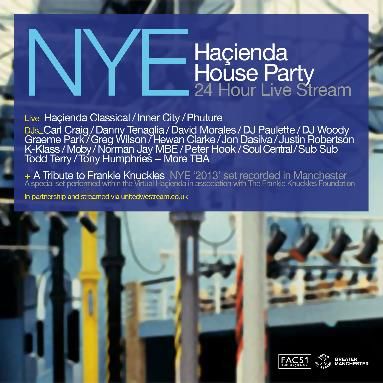 AC51 The Haçienda Returns This New Year’s Eve 20/21 For Its Biggest Ever Live Stream.

A Unique Tribute To Frankie Knuckles Set In The ‘Virtual Haçienda.’

Live Sets from Inner City & Phuture & An Exceptional Collection Of UK & US DJ’s Across The 24 Hour Line Up.

A special set performed within the Virtual Haçienda

In association with The Frankie Knuckles Foundation.

With United We Stream GM – unitedwestream.co.uk 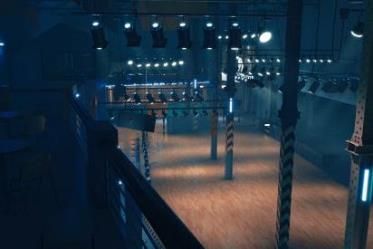 FAC 51 The Haçienda is throwing another Haçienda House Party with award winning digital platform United We Steam Greater Manchester, this time for twenty-four hours straight – as it chases New Year’s Eve around the world.

Beginning at the start of the day on the Pacific Date Line in Fiji at 10AM GMT, the event carries on throughout with a stunning line up of live guests and DJ’s to see in 2021 in style.

With the two previous FAC51 The Haçienda and United We Stream GM online parties amassing a global audience of millions and providing some enjoyment in what has proved a such  a difficult year, this twenty four hour new year’s party offers some of the finest international DJ’s, a gallery of Haçienda regulars and some very special one off live performances, all broadcast via United We Stream GM to raise funding for specific good causes.

Also performing live at The House Party will be Inner City, whose catalogue of classics including “Big Fun” and ”Good Life” have soundtracked The Haçienda for over thirty years now and acid house pioneers Phuture come in live from Detroit with their seminal waxings of “Acid Trax”.

A very special tribute to Frankie Knuckles is planned as in conjunction with The Frankie Knuckles Foundation as we replay Frankie’s 2013/2014 NYE Albert Hall Manchester set, performed within the virtual Haçienda. The entire twenty four hour live stream is also be broadcast in the digital reconstruction of FAC51 with the DJ’s performing to a virtual crowd in the original recreated venue.

For a preview walkthrough of the virtual Hacienda check here – https://bit.ly/VirtualHaciendaWalkthroughYoutube

The DJ roster for New Year’s Eve for the event is one of The Haçienda’s strongest ever and owes much to our many friends from across the Atlantic. We are honoured by their support from the United States.  From the New York scene, Danny Tenaglia, David Morales, Todd Terry and Tony Humphries. From Detroit, Carl Craig and live from Los Angeles, Moby, with all playing one off, exclusive sets for The Haçienda.

All of the performers involved are giving their time and talents gratis to the event to encourage donations to the charities involved which can be made by www.unitedwestream.co.uk.

Haçienda Classical has seen FAC51 team up with its hometown orchestra Manchester Camerata since its debut in 2016 and highlights include some ten sold out concerts at Castlefield Bowl and The Royal Albert Hall with headline appearances at Kendal Calling, Isle Of Wight Festival (twice) and opening Glastonbury Festival’s Pyramid Stage.

Manchester Camerata is “Britain’s most adventurous orchestra”, according to The Times, and whilst working as one of the very best of the UK’s performing orchestras, their long-standing work in the community with schools, care homes and people living with dementia shows their great compassion for and commitment to the Greater Manchester region.

United We Stream GM is free to watch, but viewers can donate via the website, with all income of the stream going directly to a relief fund with 50% of funds raised donated to oneGM and 50% to charities chosen by The Haçienda which are Save The Children, The Frankie Knuckles Foundation and Peacemeal.

From food poverty, to supporting those experiencing or at risk of homelessness, to providing mental health support; oneGM will deliver funding to organisations working hard to minimise the impact of this global crisis right within all local neighbourhoods.

During the first UK lockdown from the Coronavirus crisis, United We Stream GM reached 14.5 million people and the acclaimed project ran for 12 weeks, amassing donations of nearly half a million pounds for 12 different good causes and local charities, with some 40 fundraising events broadcast live on the platform.

With The Haçienda’s New Year’s Eve event marking the epic finale, United We Stream GM is set to broadcast four parties throughout the Christmas holiday as a massive morale booster for all this Christmas.

Across New Year’s Eve The Haçienda transcends the globe, seeing in a more hopeful 2021, “The Haçienda Twenty-Four Hour House Party NYE” casts the substance that defines the club into an all-day musical extravaganza to bring a fabulous New Year’s Eve party for the world.

Make sure to make time for a most excellent New Year’s Eve.

About The Haçienda House Party

Peter Hook said; “‘The Haçienda was all about the people from day one. This has been a terrible year and my two highlights were our gigs on United We Stream. For the simple reason that it helped bring people together, entertained so many when we needed it most for some great causes.”

“We’ve been watching the awful turn of events over the past year and realised it was time to round this year off in positive way and bring everyone together again for a great big party. This is only way we know how and let’s rave safe in 2021. From Manchester with love’.

Frederick Dunson said “The Frankie Knuckles Foundation is extremely excited and proud to be participating in The Haçienda’s 24 Hour New Year’s Eve event with their special tribute honouring our beloved Frankie.  He enjoyed his appearances at The Haçienda and for so many of his legion of friends it will be reminiscent to hear him and celebrate New Year’s Eve.”

“We are thankful to the great group of his DJ friends that are appearing in this historic event!”

Warehouse Project founder and executive producer of United We Stream GM, Sacha Lord explains: “A few weeks ago, I promised that Greater Manchester would hold the biggest New Year’s Eve event, not just in the UK, but probably across Europe.

“During the initial 10 week United We Stream run, the most viewed events were both the Haçienda productions.

“We always strive to better ourselves, so we are back, with not only a bigger line up, spanning artists across the globe, but also running for 24 hours.

We are the 24-Hour Party People. Nothing will stop us from doing what we do best, and at the same time, raising many funds for those in need.

“The last time I did 24 hours solidly, was quite a few years ago…but I’m prepared to give it another bash!”

People around the world will be able to watch #HaçiendaNYE exclusively via the website’s event page, www.unitedwestream.co.uk, and their official  Facebook, Twitter, Twitch and You Tube accounts.