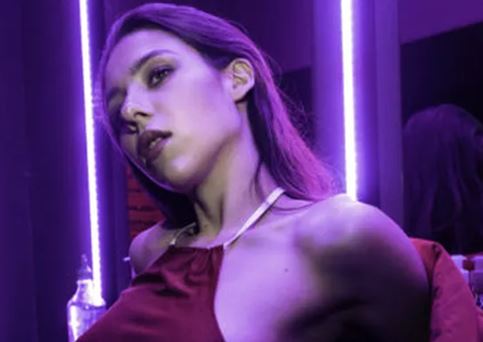 On the backstreets of the industrial BS2 area, beholds a night of mischief and debauchery behind the backdoor of Bristol’s Dare 2 Club. A rare all-night long performance from underground electronic music scenes most up and coming female heavyweight VTSS. The innovative radio host and event promoters, Strictly Yes, delight Bristol’s small, but growing dark techno listeners which always promises a devotion to music and a safe space for its audiences.

The dimly lit room enraptured with blood red lighting would be the perfect setting for someone’s worst nightmare, instead, a perfect dream for a 6-hour set that flowed with a stereotypically unusual mix of body moving music genre’s that screamed VTSS image of boldness and versatility. The Polish-born artist who is signed to SPFDJ’S Intrepid Skin and Haven has gained popularity recently with the rise of EBM styled techno artists, such as Phase Fatale and Sarin. She embraced the synthesized, hard-hitting EBM sound, creating a dark ambiance within the crowd.

The impeccably mixed set ever evolved and changed the room’s atmosphere from the groove of ghetto house, the euphoria of trance and ending with ear bleeding industrial and hardcore that shook the floorboards. The versatility wasn’t just within the set, but an audience of all ages, backgrounds, and identities. It was a celebration of the South West and Eastern European sound, forwarded by the ever-enthusiastic artist that didn’t let a tour and a long flight from Asia dampen her spirit! The artist and audience dancing together generated a beautiful image of inclusion and equality between VTSS and the crowd.

Hidden downstairs in the incomprehensibly named Dungeon room headlined Aphelion, Concept13, Ton Evo and Minuteman III. The four headliners together created a momentous joining of minds, tastes, and talents. The Bristol-based artists created a vibe of acid and the electronic dream’s encompassing Bristol’s close and supportive scene. Minuteman III intoxicated the crowd with a rip-roaring industrial techno set that kept the quick pace and high energy going until close.

With heavy hearts and hurting head’s as the crowds left the club, the blinding light of reality made myself, my friend and the ravers realize how much of an unforgettable night was. Strictly Yes carry on their success as promoters. VTSS is a fireball of inspiration and female power, and I look forward to seeing the heights her career will progress.