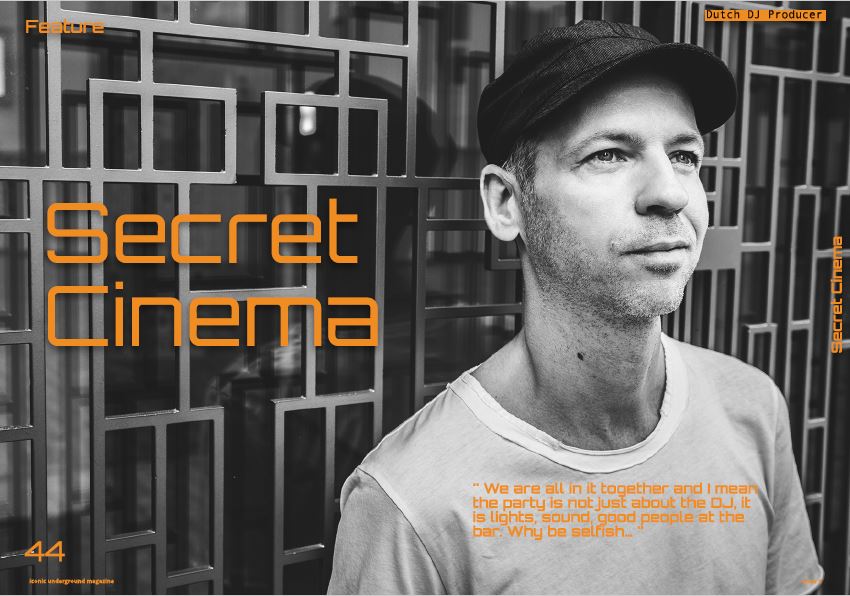 Secret Cinema has been a major player in the dance music industry for the last 25 years, and in our opinion one of the biggest dance exports to ever come out of Holland which is some statement in itself. Jeroen is a truly international artist who has graced many major festivals and events.  DaGeneral went for a chat with him to learn a little more about the great man.

DaGeneral: Hi Jeroen, thanks for taking the time to talk to us today. You have over 25 years in the industry and still going as strong as ever. For our readers (who need a bit of education) let’s start with “Sonar System” and your entry into the music world. How did you make the decision to start producing music back then, and what were your influences?

Secret Cinema: Well it all started on the dance floor. I was 16 years old and heard house and techno music for the first time in a club. I sneaked out of my parent’s house at night and my friend who had a driver’s license drove me to the club. I was dancing with my eyes closed and hands in the air and I knew I wanted to do this for the rest of my life. I bought an Amiga 500 computer and a little sampler for that machine and I started fiddling around. My first tracks were recorded on a cassette. I took it to a record store, where Paul Elstak was working at the time, and he was blown away by it. Sonar System became a big rave classic.

DG: Interesting indeed, I guess there was a part missing even though you were successful in production. The next step as we are all aware was playing life, was this a goal from the beginning or something that you found a passion for afterward?

SC: I always wanted to play an instrument, but could not find one to my liking until I found a computer. That became my instrument. I spent every day making music with it. So, in the beginning, I did a live set with that Amiga and a cassette. I played a track from the computer and then one from cassette to be able to load a new track into the Amiga. I knew I wanted to play live. But

(I should have bought a 909 drum machine then…)

DG: Unless I am mistaken artists like Egbert, Enrico Sangiuliano, and Reiner Zonneveld were heavily pushed and promoted by yourself making them into the credible artists they are now. It’s always good to see someone actually investing in other artists rather than a lot of the selfishness that goes on now. Which brings me to Gem Records. Such a successful label and still going strong. How do you find the time to balance all these different aspects of the music business, and still have a hunger to move forward?

SC: Thank you for that. I have great help from Nick Crockett with the label, so I don’t have to do it all myself. There are so many places I have not played yet and there is so much talent out there that can bring techno to new levels. I really want to be a part of that. As I said before, I want to do this for the rest of my life, so to quote Billy Holiday “be careful what you wish for, because it might come true…”. Sometimes

But the love for this music will keep me going. It is great to see such talent reach new heights and build a friendship along the way. We are all in it together and I mean the party is not just about the DJ, it is lights, sound, good people at the bar. Why be selfish…

DG: I personally love your production so eager to find out what you have in store for us in the next year on a personal production and live event basis. Anything you can share with us just now?

SC: I’ve been playing a lot of tracks I made with Egbert and Reinier which will be released on Gem Records. Some of them just work everywhere. I have just sent some parts of a track to Enrico as well, so let’s see what comes back from that! It is time for another album, so I will plan that for next year to bring out the story in my current experiments.

DG: And of course, please let us remind people the Séance EP which was released earlier this year, and if I am correct was your first solo release in over 2 years, and may we add extremely enjoyable. What was the process behind this EP, I believe there would be a lot of passion and emotion behind this being your first solo in a while?

SC: I had my studio and home in Rotterdam for almost 20 years. 2 years ago I moved to Amsterdam and had to find a studio and make it all work. My Séance EP was made in the guest room and it felt like being back when I was 16 sitting on the side of my be making tracks. Even though the room sounded so bad, I managed to make 2 tracks and

DG: Another string to your bow is Gem Bookings (artist booking agency) which features some excellent musicians like Christian Smith, Ramon Tapia, and a host of others including yourself. What was the reasons for starting up your own agency for booking artists, does it have its own set of challenges?

SC: It started with reaching out to younger artists and giving them a platform and guidance to make a living in this industry. As I grow older, it makes sense to spread your business and the most logical step was with an agency. Together with Robert Deutsch, who became a partner in the agency when he was still in college, we managed to build it to what it is now. We still keep it small, talents like Egbert, Reinier and Enrico do not come by too often and it keeps things more personal as well.

I was there for guidance at the start of their careers and as a return, they are in our agency. The circle is round I guess

DG: Another interesting element was the documentary of your past 25 years in the industry. (which we at Iconic Underground Magazine recommend readers you check it out!) How can people purchase the silver box?

SC: There is a store in Amsterdam which was named after one of my tracks, Mary Go Wild. They wrote a book about 25 years of Dutch Dance industry using that name in the title. Nick my A&R and the guys from Mary Go Wild felt something memorable had to be made and so we decided to make this collector’s item with 3 types of vinyl, all my releases on a USB, DVD’s, CD’s. I think the box is sold-out, but Mary Go Wild still has a few for sale.

DG:  It always good to have someone with such experience in an interview that likes to help. So, a question for our budding readers that want to make it in the music production and DJ scene, what advice and tips would you give to them?

SC: Do it with heart, stay true to your own taste and never give up.

You can have a wonderful life as an artist

DG:  Has been an insightful interview, thanks very much. Can we top it off by telling us your all-time top 10 tracks ever and why?

SC: That is always an impossible question because there is just too much music out there still yet to be discovered, but I will let you know the music that made a great impact on me and inspired me in life and music.

Insane sample-based electronic punk which made me believe that anything was possible in electronic music.

The most intense 303 acid bass lines I heard and that track was played in the clubs maybe 3 times a night and over time it got me…that extended part that just goes beyond anything you ever heard.

There is no better groove to imagine than that Solid Bass (from the DX7) chord in French kiss.

I saw Frank play in Rotterdam at one of his last concerts before he passed away and the symbiosis on stage was next level. This album also fits together like a human life with stories intertwined and music style switching like its peanuts. Not his best, but for me definitely one of the most enjoyable ones.

A rapper, a turntable, and a 909 drum machine. Forward-thinking hip-hop using just the basics and being so fat in sound. It blew me away when I was young and started my interest in electronic beats. (Still didn’t make me buy a 909 drum machine…sucka!)

Spaced-out deepness in pop. One of the best tracks to trip on and it defined a new genre. I went to two Pink Floyd concerts in my life and I am happy I did.

Experimental music from one of the Yellow Magic Orchestra members. Having a big love for the Japanese culture I am always on the lookout for music that hits me and is from Japan. I played there more than 30 times and to be able to go there and explore this culture throughout my music just makes me feel as grateful as I can be.

Again experimental but in a poppy way. Two icons together on a trip of their own. Makes me smile.

Growing up in a Jazz environment with my dad playing the contra bass this type of music always has a place in my heart. Impossible to name just one, but Miles Davis, Thelonious Monk, Mingus, Dizzy Gillespie (my dad’s favorite), John Coltrane, Joh Zorn(sometimes), you name it. Just listen…it will make your life better.