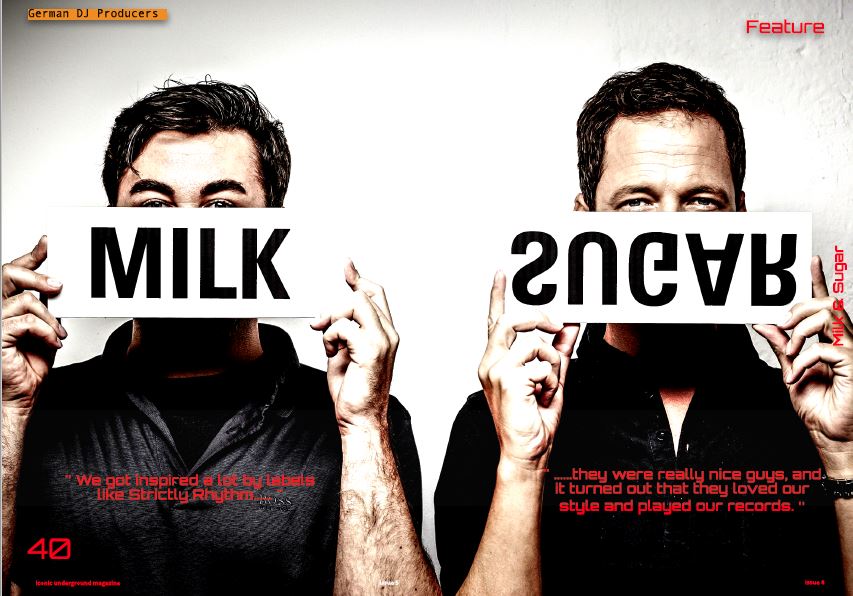 Mike Mannix: Thank you, Mike and Steffen aka ‘Milk & Sugar’ for talking to us at Iconic Underground, can you tell us looking back, what initially attracted and influenced you onto the decks, and eventually into the studio to produce your own tracks?

Mike: Yes, sure! We both started out in the early nineties here in Munich as DJs, I was promoting parties and big raves. I accidentally met Steffen who also worked in a recording studio and from that moment on we started producing our own tracks. It didn´t take long until we discovered our love towards house music. My girlfriend at that time lived of this version is pretty much standard: I played some tracks on my Fender Strat and arranged the track with Logic Pro. We tested it in the clubs over the summer and optimized the mix a bit in the low end.

The Barbara Tucker Songs are a bit outstanding, too, because we combined a total of four recording sessions with her into two songs – we were taking the best parts of her songs and combined them in Melodyne. Both of the songs are again done completely inside Logic, and the signature bass on “Needin U” is a modulated NI Monark Synth. I wanted to achieve a quiet “analogue” drum sound on those tracks, so I worked a lot with Spectrasonics Stylus Remix, which I think is great for big and warm sounding drums.  On “Bass…” we received all the samples from the original recording almost perfectly cut and EQ´ed from Simon Harris, so the production wasn´t too difficult.

We contacted Maria Marquez’ through our label partner in Venezuela. We were surprised to get into contact with her easily and happy that she suggested recording the song with us. So we sent her our playback and she delivered perfectly balanced vocals which fitted greatly in our playback. Again, all the production was done in my studio with Logic Pro X, and I just added some acoustic guitars.

For mastering the album, I went back to the original programming of most of our tracks to smooth out some difficulties that occurred during the mastering process. But in the end, everything seemed to glue together really well!

MM: You’ve played alongside some greats in the industry such as David Morales’ ‘Tony Humphries’ and the king of House ‘Frankie Knuckles’, tell us about those moments and how they have inspired you and your music?

Mike: Those were our heroes when we started DJ’ing. We got inspired a lot by labels like Strictly Rhythm, in the early 90’s, where they had their tracks released. However, we had the honour to play a tour with all of them during the 2000 era.

They were really nice guys, and it turned out that they loved our style and played our records.

MM: Tell us about getting the call to remix for Jamiroquai, Janet Jackson & Ben Pearce, and then how you went about working the remixes?

Steven: We had a major label deal with Universal for a couple of years, and they came up with some great remix collaborations. I think that Jamiroquai really wanted us to remix his track “Corner Of The Earth”. This was quite a challenge because the track was way too slow and played without a click and something like “elastic audio” had not been invented yet. So I ended up bouncing and stretching a big amount of a couple of bars individually, which was a nightmare, but the track sounds great.

With Janet, I think we received 4 DAT cassettes with the entire 48 tracks of the song recorded one after another on tape! Getting all those tracks back into the computer and aligned into phase was a nightmare.  Unfortunately, both mixes are not on iTunes or Spotify, but it’s easy to find these recordings from vinyl on Youtube.

Remixing Ben Pearce was great fun and the production was really quick. We used a jacking house approach with some retro synth sounds, I think my Korg M1 was also involved. Most of the drums came again from Stylus Remix.

MM: What DJ’s / Artists / Producers are behind your ever driving passion for the scene?

Mike: It is hard to say, as we don´t have role models in the electronic scene. There is not this one hero we look up and which let us go on and on. Though

we have the biggest respect for Sven Väth and DJ Hell, for being so long in the business and still setting the bar that high. So maybe this could be a good aim to stay in the game as long as those guys do and delivering high-quality music.

MM: What was the inspiration behind your award-winning M&S Record Label and the ethos that drives it?

Steven: Like Mike said before, in the very beginning it was a need to be able to release our style of music and to follow our visions without being influenced or overruled by some A&R people. On the other side, it taught us a lot about the challenges in the music business.

Mike: In the very beginning we only released our own tracks, and never planned to sign other artists. But when the first success came, other producers and DJs started sending us demos and asked us to release on Milk & Sugar Recordings. We released acts like Robbie Rivera, Tim Deluxe, Prok & Fitch or Full Intention, among others. It also turned out that our mix compilations became incredibly successful here in Germany, hitting the top-10 iTunes charts every time.

MM: You are getting ready to release an album in October celebrating some 20 years of Milk & Sugar tracks with some of the expected big hits and also some new material you’ve written such as ‘Higher & Higher (Milk & Sugar remix)’, ‘Music Is Moving’ and ‘Summertime’, what’s your feelings and expectations at this point for the album and was it a big undertaking?

Mike: We started last year in autumn to work on our album and tour concept. It turned out we had to make a bunch of new tracks that have not been released yet to get on a proper number of tracks. At the end, we tried to keep a modern touch and not go back into our history too far. We were forced to kick some songs that we feel would not fit the sound of our album, for others – like “Let The Sun Shine” – we made a new version to make it fit the album vibe. There is a lot of more amazing stuff to discover, like our cooperation with Ron Carroll. Our intention was to make it sound like a concept album and not a best-of Milk & Sugar album.

MM: What advice would you give the aspiring Producer on how to be creatively original in an already saturated market?

Steven: I think that DJ’ing and producing music are essential, such as talent, of course. Then it´s also about improving those skills and trying to get better every day.

Many young DJ´s have their focus on self-marketing and social media, which is important, but it makes a big difference if a DJ can move the crowd or not. And on the stage is what counts, not the number of Facebook followers.

M&S: We would like to rescue some historical masterpieces over the last decades. These are the tunes we are feeling deeply connected with.

4.) Laurent Garnier – The Man with the Red Face

8.) The Bucketheads – The Bomb (These Sounds Fall Into My Mind)

MM: What happens on tour stays on tour but, any sneaky bits of craziness you can hint at??

Steven: One night we played at a club in Frankfurt, unaware it was kind of a ‘gay night.’ A guy came into the DJ booth and asked if he could put his clothes down. We thought okay—assuming he meant his coat. He took off everything—everything, except his boots! Nevertheless, it was a great night, though we saw more than we probably needed to.

MM: What have been your biggest standout festival/gig moments?

Mike: We played at Green Valley in Brazil, which was one of the best gigs ever, 7000 people turned up. They got us to the backstage entrance in a van, but we almost missed our stage time as there were so many people in our way waiting for autographs. We played for 4 hours instead of 2, the crowd was wild. Afterwards, we went to the owner’s house and played there until the afternoon.

MM: What is the future of House/electronic music?

Mike: Well, that´s a difficult question. House is coming and going in circles. At this moment we feel there is a bright future for House, as Techno is so big at this time,

everybody is playing techno and people are getting bored of it sooner than later.

MM: What’s your next big project/collaborations/Album plans for 2017/18?

Mike: We will have an anniversary showcase at the ADE in Amsterdam and for sure throw more celebration events around the globe. For the rest of the year, our focus is clearly on promoting this album.