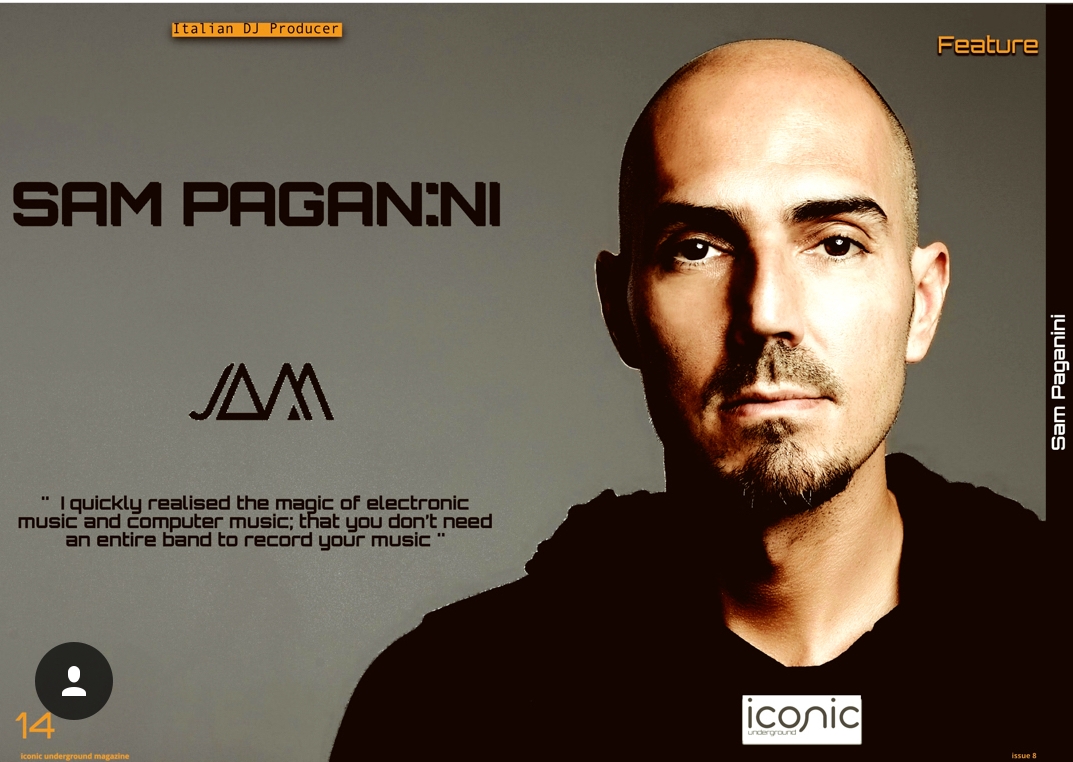 Victoria Ball: Thank you, Sam Paganini, for taking the time out from your busy schedule to talk to us at Iconic can you tell us looking back, what initially attracted and influenced you to become a DJ, and eventually into the studio to produce your tracks?

Sam Paganini: Hi guys! I’m a “music lover” first, since the early days of my life I’ve been attracted to every kind of music, rock, pop, dance, jazz and the instruments in general. I started playing drums and percussion at the age of 5, then guitar and the piano. I played in local rock bands as a drummer for a few years, then I started DJing at the age of 15.

I quickly realised the magic of electronic music and computer music;

that you don’t need an entire band to record your music, you can record every single instrument step by step and do your own music completely alone. So with the first bit of money I earned, I bought an Atari Ste1040, the sequencer Cubase, an Akai Sampler and my first Yamaha synth and started experimenting.

VB: You started in the 90’s with dance music under the title Paganini Traxx and had a huge hit with Zoe in the UK charts. When was the turning point for you to move to techno and why? Your Techno has a groovy, dark, sexy style and I noticed you dropped some acid techno at Sonus Festival. Is this from your roots of your 90s days and a good definition of your music?

SP: Zoe was a huge hit in 1997, especially in the UK club charts when it was no 1 for 2 weeks, it is an 11-minute long instrumental ride across Progressive and Techno, and the first record produced in my first own studio. It was an exciting moment of my life, I became kind of independent as an artist, I had training at Media records that was more oriented to dance music. My early influences included acid house, labels like Warp and artists like LFO, KLF, and others, also the Detroit and Chicago scene with labels like UR, Trax Records, DJ International just to name a few. About the definition of my music…well, I think it is close to what I’m playing today yes,

I’m always looking for banging beats, dark but with a sexy groove.

VB: How do you rate techno now to when it first started, with new equipment coming out and so many styles, do you think it’s improving with age and technology?

SP: Good question, I’d never really been a big fan of high BPMs, and during the 90s I was spinning techno records (originally recorded at 140 bpm) at max 130/135. In my opinion, it sounds more deep and groovy, I really love techno nowadays as it’s not as fast as in the past. Someone said that Techno will never die, I agree. Techno is evolving year after year, produced with different drum machines and different technology but it is still techno even if it is referred to a lot of different sub-genres.

VB: Back in the day, a DJ had to put in some seriously long hours and dedication to learn the beautiful art and skills of using their ears to beat match and mix vinyl. Now with the advent of digital decks and beat matching software, are today’s electronic DJ’s at a disadvantage?

SP: Training is the key in every profession, but the most important thing in a good DJ is the selection, with the selection you create the vibe and the mood of the party, you need to connect to the people.

DJ skills are important yes, but not as much as the experience you can earn during hours and hours of parties in different venues with different crowds.

Regarding technology I’m not that kind of DJ that says spinning records is better than playing music with a laptop,

there’s a lot of great DJs out there using technology and there’s also some great DJs rocking every night using just 2 turntables and some records.

Personally, I’m not a laptop fan, never used on a booth but as I said it is the final result important not the technology used. But of course today a young guy doesn’t need to spend a lot of money buying records, in few hours he can build his own discography on mp3 easily.

VB: Can you tell me the most recent piece of studio hardware or software you brought that blew your mind. And why?

SP: I finally found a Roland Jupiter 8, a great 80’s polyphonic synth, used by a lot of bands I love, from Depeche Mode to Duran Duran and Simple Minds. I’m still a vintage synths collector, pretty expensive but it is the only hobby I have.

VB: You have played at what I think is every great event around the world? Timewrap, Sonus, Awakenings, Loveland are just a few and including my bucket list Kappa Festival. Is there a favourite? Which ones are you always excited to be invited back and is there any you still have on your bucket list?

SP: Indeed, such a great honour, what a dream. For personal reasons I would say Timewarp and Awakenings, I’d been attending both as a raver for many years so you can imagine how excited I was the first time I was invited to play for them. Festivals are growing and growing and there’s a lot of cool and different venues and promoters out there, I am already more than happy and grateful about what I’m doing now.

VB: Your new album Zenith is excellent by the way. Why this album? What is the story behind it?

SP: I started my own label called JAM on January this year releasing 2 very well received singles. The natural step was to release a full extended album to express my musical vision. 10 tracks from Techno to Deep to Ambient/Electronica. The recording process has been pretty exciting and natural as I didn’t have any pressure from externals A&R or label owners. I’m very happy about the result, it is available on double vinyl (including cd), Cd and of course on digital format.

VB: Your Zenith World Tour is massive. Just in September, you covered 13 gigs in 10 countries. How do you prepare for something like that? How do you find so much energy, do you have a ritual you have to stick to? Do you have a game plan for each set?

SP: Well, first, I don’t drink very much alcohol, for example, I love red wine during dinner but I avoid spirits / hard alcohol. I’m Italian so I’m paying attention also to the food, I love light food, Mediterranean when possible and I try to relax a bit when home. I don’t have a game plan for my sets, each night is different, a festival performance is totally different to a club’s gig where you can play longer sets of 4/5 hours, maybe I have in mind the opening track and the closing track but that’s it.

VB: With so much touring and traveling, what happens on tour stays on tour but, any sneaky bits of craziness you can hint at or one of the most fun things you have seen?

SP: Mmm…there’s a lot of crazy and funny people in nightlife. Maybe it’s not that funny but recently when I played in Belgrade

I got a bra in the booth from a smiling lady.

VB: Your tattoo on your arm is quite unusual, what is the story behind it and meaning?

SP: That question makes me smile, my girlfriend doesn’t like it at all…I did it at the age of 19, it is a heart made from roses…nothing behind the meaning, I’m still loving it 🙂

VB: What would your friends say they appreciate the most about you?

VB: So what three tracks in your playlist never fail to get the dance floors crazy across the world, and why you think they have such an effect?

Johnny Vicious – Activator (You Need Some)

From 94’ it is incredible how this track still sounds fresh today, a bomb.

VB: Where do you think yourself and the scene will be in 5 years from now?

’m living a dream, touring around the world, playing my fav music finding a lot of nice people full of love

…sometimes it is heavy, yes but I would never complain, it is the best job in the world and I’m very lucky and grateful to do my job/passion. In 5 years? I would be more than happy to do the same job, this is what makes me happy…for 28 years.

VB: Thank you so much, Sam Paganini, for taking this time out with me, it’s been an absolute pleasure.