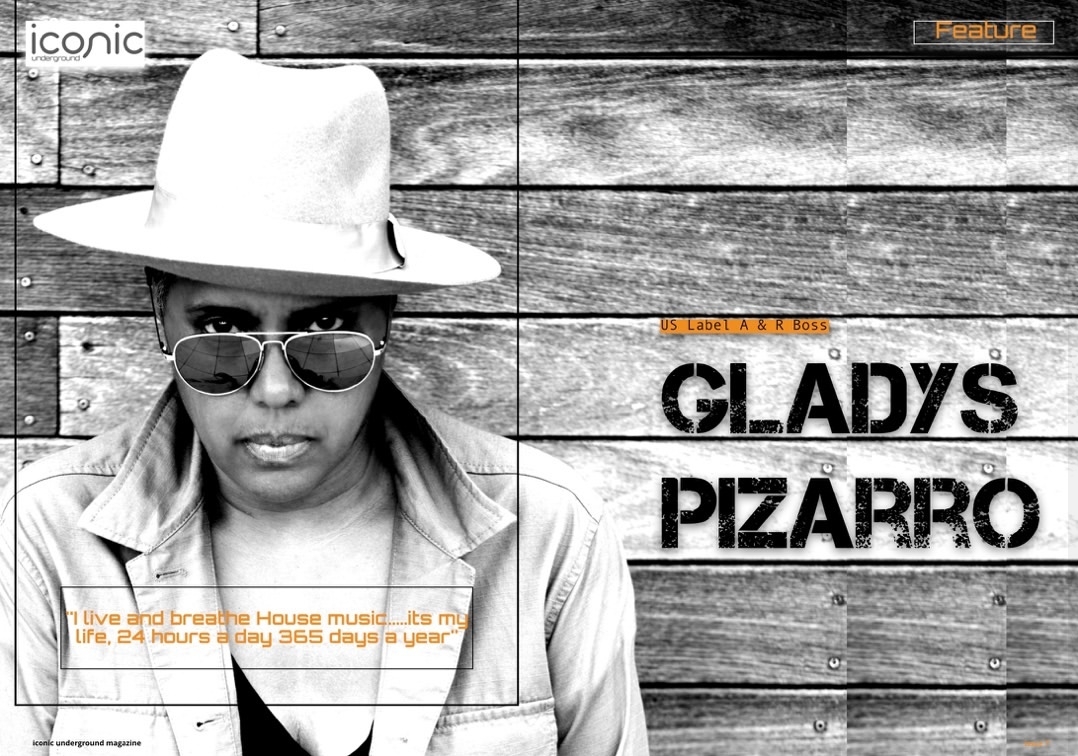 What do Roger Sanchez, Todd Terry, Kenny Dope, Erick Morillo, Armand Van Helden, and Josh Wink all have in common? Only the most celebrated House Music multi award winning A & R Label boss in history! In a strictly rhythm kind of we sat down a chewed the phat…

Mike Mannix: Nice one Gladys for dropping into us at iconic underground it’s a real honour. Before we touch on your extensive and innovative career in dance music I’d like to touch on your background and early influences socially and musically before you came up, what moulded and defined you?

Gladys Pizarro: Thanks Mike, well I grew up in “Spanish Harlem” that’s where I got my musical education from.  Between my father blasting his salsa records and my sisters listening to R&B and Rock, I believe that’s how I developed an eclectic ear.  In my teens, I wasn’t allowed to go clubbing so I would go to the housing projects every Friday night to hear the DJ’s play music.  They would bring out their turntables, hook up the amplifier to the lamppost, attach the speakers and play disco, rap, and breakbeat tracks. This would set-off a superfly street party.

MM: You co-founded a hugely influential New York label ‘Strictly Rhythm’ in the house music scene and launched and developed superstars DJs and Producers Erick Morillo, Josh Wink, Armand Van Helden, Masters At Work, and Roger Sanchez to name a few on your illustrious extensive artist list. Discuss how the label itself manifested with Mark Finkelstein from inception leading up to signing and working with these heavyweight artists.

GP: I was working with Mark Finkelstein at an R&B label.  After my 2 year stint at Spring Records the label closed.  Mark who wanted to remain in the record business approached me to work with him.  I needed a job and accepted his offer…..Now In the mid-1980’s, there was music called “Latin Freestyle” that was popular in New York City.  For a minute there, I thought about signing those type of records but that was definitely not the direction to go to…WHY?  Because labels like Mic Mac, Cutting, Tommy Boy and a few other major labels were ruling the radio airwaves, and the competition would’ve been fierce.

Since I was out clubbing all the time I knew that signing house tracks was the way to go. I spoke to Mark and told him he should open up a House Music label and so he did. He wanted to call it RHYTHM RECORDS but I felt that the name was a bit corny. So I said why not call it Strictly Rhythm? He agreed and that was the day Strictly Rhythm was born.

In the beginning, it was difficult to get good house music,

It wasn’t till Strictly Rhythm released the 7th record.  “The Warning” by LOGIC, that was the record that got us noticed….not only in New York but in the UK as well, as a house label. That track put us on the map thanks to Tony Humphries who played the record at Club Zanzibar and on his syndicated radio mix show. By the time I got to the office on Monday the phone was ringing off the hook cause labels from the UK wanted to license the track.

About a week later I went to hear a DJ play at a club in New York City.  He played a great set.  I was so impressed I immediately asked Mark “let’s put this DJ/Producer in the studio to see what he can produce”. That DJ was Roger Sanchez, the track he produced for me at that time was called “Luv Dancin” which turned out to be a house classic.

A few days later I approached Todd Terry. I use to love it when Todd came by the office to visit me… Why you may ask…because he used to bring me a box full of DATs… and I could pick out any tracks that I wanted for the label.  It was Todd who introduced me to Kenny “Dope” Gonzalez.  I approached Kenny and he gave me The Untouchables and he collaborated with Louie Vega on other Strictly Rhythm projects.  I have always been a Louie Vega fan  …I loved the remixes he had done for Todd Terry, Jellybean Benitez, Noel, Information Society and so much more…

Once we connected he came by with a track called “Sindae”…..but it was the track Beautiful People and The Hardrive E.P that took Strictly Rhythm to a whole other level of the house.   “Deep Inside” was included on the E.P sampling vocals by Barbara Tucker making that track another house classic which was used today by Kanye West “FADE”

In my office, I found a cassette tape of Armand Van Helden productions in my demo box.  He submitted a track that I liked a lot.  I called him up, put him in the studio and watched him produced so many tracks for me under pseudo names such as Pirates Of The Caribbean,  Circle Children, Da Mongoloids, The Mole People and as ARMAND himself.  He turned out to be one hell of a producer on his own and as DUCK SAUCE.

Erick Morillo came to my office a few times to let me hear some of his tracks. I turned him down quite a few times until he gave me a really cool track called “Funky Buddha” From there on he was on a roll.  I gave him a 3 single deal and he delivered every time making each track he produced better than the last….funny his 3rd track  was the home run …that’s when he produced  “I Like To Move It” by Real to Reel which was featured in the Disney movie  “MADAGASCAR”

MM: Ok kool, so considering the dynamic pedigree of artists you’ve already worked with who else would you like to get in the studio that you haven’t already, who is inspiring you?

I wish I had of had a chance to work with even though I tried, The Godfather of House DJ Frankie Knuckles and Dave Cole from C&C Music Factory fame.

MM: You are widely recognized in the music industry as a “legend behind the scenes” with your pioneering vision in spotting and developing talent, whats the secret behind the “Golden Ear”, how do you know when you know?

MM: Haha nice one, so tell us about how the New York underground scene today is progressing and where do you see it evolving?

GP: We have a Wednesday night party in New York called “Roots” with Louie Vega and Kevin Hedge…..  The scene I feel has shifted and it’s progressing now in another borough….. Brooklyn!!!  Where House music is Alive and Kicking with Clubs like OUTPUT, Halcyon, House Of Yes, etc.

MM: With ‘Strictly Rhythm’ winning so many awards and accolades over the years how have you and the label maintained the drive and passion to keep achieving.

GP: Well back then I was just DRIVEN to be the best…

It was important to me to stay on top of the game.  I didn’t want to lose the “BEST INDEPENDENT LABEL AWARD” we won 10 years in a row!!

MM: After years of unprecedented success with ‘Strictly Rhythm’ you have launched your new Label ‘Launch’ what can we expect?

GP: Well I’m very excited about my new label LAUNCH… I figured the name would be appropriate after launching the careers of many notable DJ, Artist, and Producers. What you can expect is……..I’m going to experiment and take some risk from a few NEW PRODUCERS I signed to the label.  I’m not going to put out that generic house shite!

MM:  Tell us about your new role as executive producer for the documentary “Gotta Have House’’?

and so much more.  It’s interesting to see how their careers took shape and how they came from humble beginnings and landed up having lucrative musical careers in the house music genre.

GP: My advice is,

you can be inspired by others producer or singers…..but bring your own style to the masses.  Think outside the box don’t copy what someone else has done. Color outside the lines lol

GP: What pissed me off was when the music changed in the late 90’s it went from house to harder beats.   ALL good things come to an END…. and I had a great 16 year run at Strictly Rhythm.   What I love is that most of my signings whether there DJ’s, Producers or Artist there still relevant today…. there traveling the world, performing and making that money….and that makes me feel great.  That I made a contribution to the scene and to people lives 🙂

MM: So what are your biggest stand-out festival/gig moments where you thought ‘fuck this is real this is amazing….’?

GP: I was really blown away by the 51 state festival in the UK……You talk about having Thousands of people together loving house music.  I never saw anything like it, it was so well organized.  THE VIBE, THE PEOPLE…Different tent for different genres of house, no fights all love.  That what I’m talking about.

MM: What’s next for Gladys?