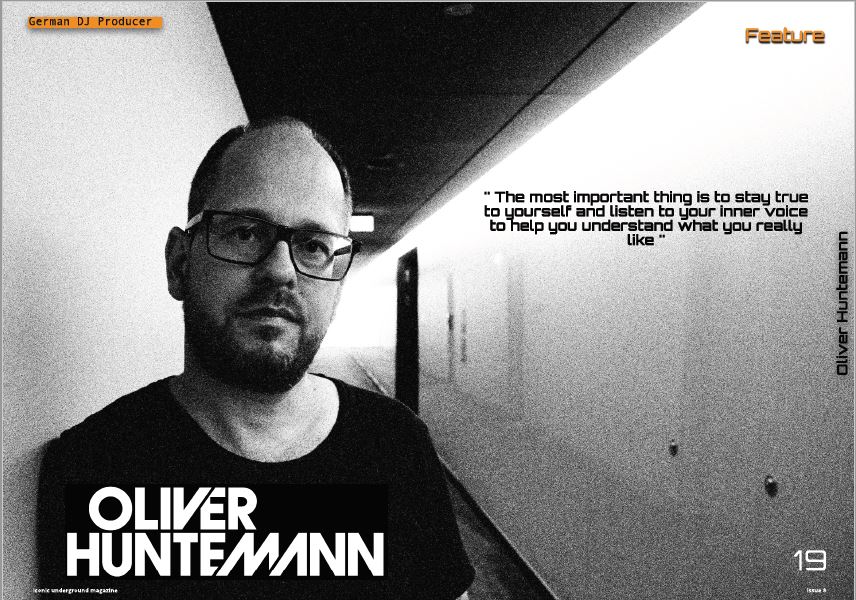 Influential German Techno Producer innovator & Label Boss ‘Oliver Huntemann’s’ longevity roots can be traced way back to early techno through electro and rave. Hes a pioneer and quietly a master of his craft. His legacy and skills speak for themselves!

We caught up with this seriously talented artist to get his views on life and the scene….

Mike Mannix: Cheers, Oliver for talking to us at Iconic Underground, can you tell us looking back at growing up in Hamburg, what initially were the first musical influences that inspired you, what was the spark the burned you onto the decks, and eventually into the studio to produce your own tracks, what gave you the itch to mix?

Oliver:  Thanks Mike, I grew up in a small city called Oldenburg in the north of Germany. I must have been around fourteen years old when Break Dance hit Germany in the 80s and it immediately infected me. We were a small group of boys who were dancing in the streets every day, trying to be like the Rock Steady Crew or the New York City Breakers. I loved this new music and been inspired by Afrika Bambataa, Shannon, Hashim, Egyptian Lover and Arthur Baker. We were waiting every week impatiently for new records, imported vinyl from the USA been special and rare. I like to remember this exciting feeling of going to the record store with the hope that new stuff has arrived. Once I’ve bought some records I went home and listened to ​them up and down until I knew every beat by heart.

Getting into producing came a couple of years later when I started to promote my own Techno parties and met Gerret Frerichs who already owned a studio. After we started to work on simple tracks I began to buy my first synthesizers and drum machines such as Roland TB 303, TR 909 and 808, SH101, JD 800 etc.. Soon later Gerret, P. Kjonberg and myself founded a project called Humate. Our second single ‘Love Stimulation’ was released 1992 on Mark Reeders MFS label and became quickly our first club hit, with a little remix help from a young unknown boy from Berlin called Paul van Dyk.

MM: Collectively you’ve produced a sizable back catalogue of quality tracks and albums with some exceptionally successful floor fillers. But first I want to touch on a couple of your remixes such as Depeche modes ‘Everything Counts’ that you produced with Stephan Bodzin, and also Chemical Brothers ‘Do it Again’. Can you walk us through the studio production process from the analogue outboard, midi, samples, and DAW you used and why? What was key in the whole production process?

O: Back then when Bodzin and myself ​shared a studio in Bremen we were working completely analogue but always when something new showed up which seemed to make our workflow easier we tried it out. It was such a benefit to change the analogue mixer to the Yamaha 02R mixer but this was just the beginning. Over the years the studio morphed into a small effective digital world. When I left Bremen to move to Hamburg I gave up having my own studio and put my synth museum into André Winters studio. Since then I’ve been ​working with André on all my productions. André is the guy with the magic ears.

MM: Some partnerships stand the test of time and your collaborations with Dubfire certainly have. Let us know about how the track ‘Dios’ and the subsequent successful series ‘Elements’, how the partnership was formed, birthed and evolved?

O: Ali wrote to me​ back then on the social network MySpace, he ​said that he likes my music and asked if I’m up for a collaboration. I loved his music too and of course, agreed. Short story. We didn’t ​even meet at​ first and were​ only sending files back and forth. We have the same studio set-up and still work today by​sending Logic sessions back and forth until we think a track is finished. I guess Ali and myself​have similar feelings​ for grooves, sound aesthetics, arrangement, and dramaturgy. It’s usually easy when we start​ to do a new track.

After all these years we also became friends and respect each other very much.

MM: Your fourth artist album entitled “Paranoia” received massive critical acclaim, what were the circumstances that led you into that mindset to extract those powerful cuts? As a body of work, what does it say about you as a producer?

O: I guess ‘​Paranoia’​ was like a rebuilding phase. After a few years of learning that less can be more, I started on ‘​Paranoia’​ adding carefully more sounds with the intention to create a certain vibe and get a deeper soul into my tracks.

MM: Your fifth album entitled ‘Propaganda’ which is getting a full review by iconic is due to be dropping on 13th October on your ‘Senso Sounds label’. Can you tell us the journey and influences behind this dark electronic sophisticated techno album?

O: ‘​Propaganda‘ is the outcome of a natural progression of the past six years. As the task was to create a more grown-up sound, ​without losing my touch to clubby underground dance music.​ The LP ​took much longer than any of my previous albums to finish. Although I knew from the beginning what I wanted to achieve, ​it was not easy to reach that point of satisfaction but after some test tracks it went perfectly and I’m more than happy and proud about the result.

MM: Whats the secret to remaining relevant over 2 decades?

O: I never thought about if there is a secret to remain relevant in the scene, I just do what I like and feel. My unaltered passion for electronic music and arts and the volition to work hard to reach my goals helps a lot. I’m still hungry setting my marks in the business and also finding special music for both my productions and DJ sets. Always when I reached one of my targeted objectives I set a new one on a possibly reachable level. I don’t do things without a clear prospect.

MM: What advice would you give the aspiring Producer on how to be creatively original in an already saturated market?

I very often receive ​demos from aspiring producers with many tracks of different genres from Deep House via Progressive to hard Techno. This can’t be the way because there is no space for identification. I really like variety and surprises but within a more or less recognizable sound frame.

– Because this is simply my talisman. It has and will always be in my box.

– Kind of unknown but an essential tune for me.

– One of the best intros and an incredible resolution. I still puzzle over how he did it.

– The first single ever that was released only as a 12“.

– Something for the heart.

– Makes me almost cry. Love the voice of Beth Gibbons in combination with the distorted beats.

– Something for the soul.

MM: What have been your biggest standout festival/gig moments?

O: There have been so many special moments from a truck gig at​ Love Parade in​1995 in Berlin via Fabric London to Strawberry Fields Festival in Australia and many, many more.

The best is, it still continues

Let’s see what happens in Argentina, Mexico, Peru, Colombia, Canada, USA within the next few weeks.

MM: Techno, where do we go from here, what’s the future?

O: The good thing is: I don’t know! Would be much too boring to know what’​s next. I love the surprise the electronic music scene has presented​ for almost 30 years.

MM: Whats your next big project/collaborations/Album plans for 2017/18?

O: First of all I’m excited about the upcoming release of ‘Propaganda’ plus a sweet tour around the globe for the next six months. In addition, we have some great releases coming on my label Senso Sounds from artists such as Hatzler, Alex Stein, André Winter and Carlo Ruetz. Step by step we are also launching our Senso Sounds showcases in selected venues.​