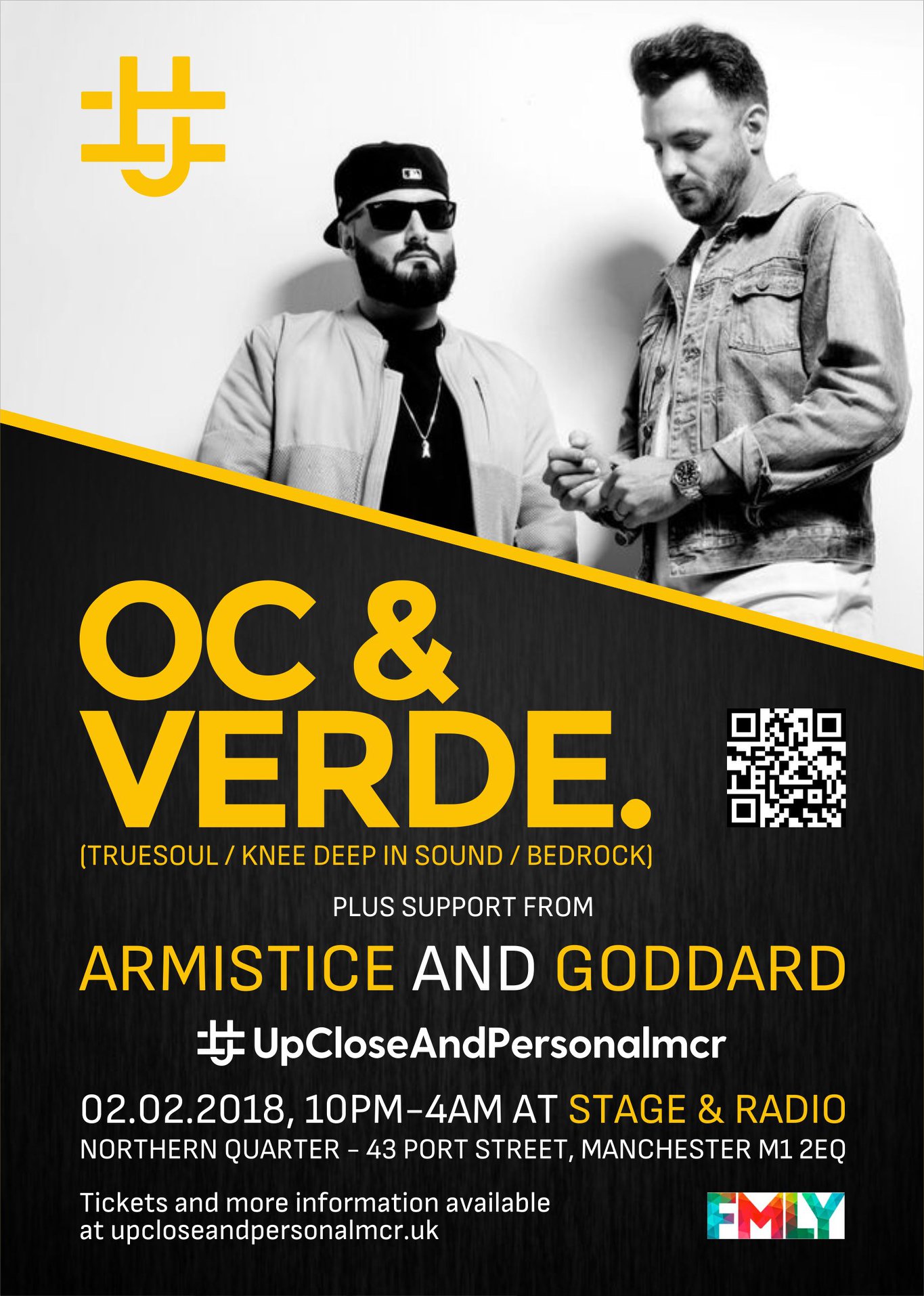 After previously attending Up Close and Personal in Manchester to see Luke Warren and Quivver, My partner and I joined the facebook group to find out who else was playing at this night that reminded us of the friendly warehouse type of vibe from way back when the criminal justice bill was only just being talked about. Andy Holdsworth had become a friend through him being possibly the most friendly promoter ever and we noticed that he posted a link to an OC and Verde mix. We loved their sound so we instantly bought tickets.

A friend had also accidentally seen OC and Verde playing at a festival last summer and once she heard we were going to this she bought tickets too. In the end there was a group of 10 of us out. A few of us met up earlier in the night and went out for a meal and cocktails in Manchester’s Northern Quarter to start the night off. We were happy knowing that Stage and Radio, the venue was a short walk away from where our night began and the vibe was already lifting

We got to Stage and Radio around 10.00 where the upstairs bar was already filling up. The DJ’s were playing some commercial classic house which was easy for everyone to get into. There was already a buzz about the place. Most of our group are in our mid 40’s and although we are seasoned DJ’s and clubbers we often feel a little out of place with the average age seeming a lot younger but not so at the UCAP nights. There is always a real cross section of ages of people in the crowd.

There were lots of of happy smiling faces in the bar and it was easy to make conversation with strangers as everyone was so friendly. It already felt like this was going to be a good night.

We had been waiting a few months for this night to arrive and were really looking forward to catching OC and Verde after all the mixes and their own tunes that we had listened to. Downstairs opened and we could hear the bass coming through the floor…. We were off

We got downstairs and firstly I noticed that the room had been decorated and the bar was now a nice blue tiled bar. It looked better than it had the previous time. First up were Ross Armistice Quinn and Andrew Goddard. The room was filling up and the DJ’s were mixing some really melodic uplifting progressive house into a beautiful sound. These guys were playing B2b style and it was completely working. They even managed to mix in the beautifully remixed version of Donna Summer – I feel love, giving a nod to where it all began. I will certainly be looking out for their names appearing on any more event flyers. Their set was cleverly building for the guys themselves – OC and Verde.

They started their set around 1.00 and wasted no time showing us what they were capable of with those sublime progressive sounds amongst the Tech house bangers. They were every bit as good as we had hoped for after hearing a lot of their mixes. Watching them playing around with the effects and hearing what they came out with was amazing! These guys are going somewhere.

They seem to be able to create a sound which always has a nod to the old school but in a very sleek modern produced style.

They played alot of their familiar big tracks and what seemed like a lot of new tunes. They seem to have a slightly different sound to a lot of other progressive/Tech house DJ’s as they sound edgier and darker but always in a really melodic uplifting way. The venue itself has an old school Boiler room style feel to it and Oc and Verde worked so well in there. So much that I heard

they had asked if they could be UCAP residents

(That could cost me a fortune as I can’t miss them playing next time either).

The Night, The Venue, The DJ’s, The Crowd, even the bar staff and the ever so friendly promoter made that a night that would not be forgotten in a hurry! Awesome stuff!