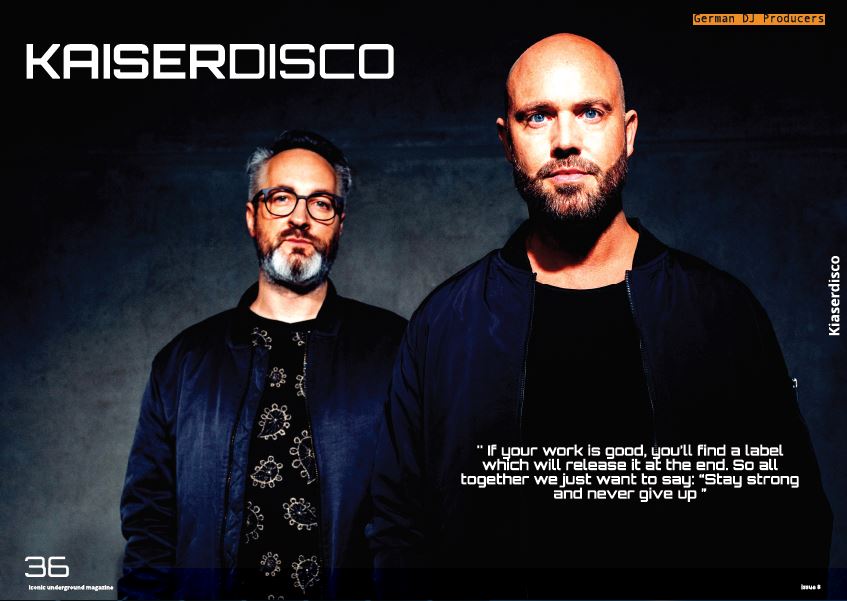 Frederic Berger & Patrick Buck who we all love as Kaiserdisco have been putting out some great techno and albums over the last 10 years since joining forces. We have seen them grow with massive releases on some of the heavyweight techno labels before also setting up their own record label KD Raw. Being a fan we sent in DaGeneral for a chat with the guys and get the low down on this dynamic duo.

DaGeneral: Hey guy’s thanks for taking the time today, can we start by giving our readers a little background history on Kaiserdisco what your backgrounds are and how you become to being a duo?

Kaiserdisco: We founded Kaiserdisco back in 2008. Both of us had a musical past in terms of learning and playing Instruments, which started back in our childhoods. We both were also members of different DJ and production duos before we joined forces as Kaiserdisco. We knew about each-others projects already but never met before in person until one night in a club in Hamburg. We talked to each other for a while and then decided to meet again in the studio, for which became our first collaboration. We’ve had such a good time in the studio that we decided to go on after we finished the first production and so Kaiserdisco was born.

DG: You have been quite full on with a number of high-quality releases on some major labels including Drumcode, Suara, Tronic, and of course KD. How do you describe your own sound, and what approach do you take when going into the studio (I mean in regards to is there a certain procedure on key plugins/hardware you must have)?

KD: The first goal that we aim for in every production is to make the people dance, and we enjoy playing all of our own tracks in our sets as much as possible. For this reason, our productions are always groovy, driven by a lot of energy, and catchy because we always try to have a melody or a theme in our tracks. We would also describe our sound as techno music, which is not too hard and not too dark. When we are in the studio and start a new production it’s more or less always the same procedure. First of all, we play a four to the floor bass drum, then creating a one, two or four bars groove pattern which is built out of a mixture of single drum machine sounds and sometimes loops or single sounds took out of loops. After we program a bass line so that we have an outstanding and rocking groove at the end, which has to be interesting enough that it can run for minutes or even hours without getting you bored. If you do have this, it is already half the battle. The next step is most often the hardest. Finding the right main theme played with the right sound. If we have this as well, then the rest is just craft. The only hardware we need for this is a powerful Mac in our case a fully armed iMac and tons of plugins on it which we are using in combination with Logic Pro X.

DG: Let’s not forget there is another nice label producing some excellent releases at the moment “KD RAW” – how do you find the time to run the label on top of another packed out schedule, do you have a team of support helping to keep things running, or is most of the work done by yourselves?

KD: We have a very small team around us who are working for us especially in terms of bookings. One of them is Patrick’s girlfriend Stefanija who looks after all management issues and reminding us persistently of all the things we should have done already. However, all production and label matters are more or less done by ourselves

DG: Onto the live-action front, you guys have been extremely busy over the last year playing at events all across the world. What have been the highlights over the course of this year so far and what moments stand out the most?

KD: It’s hard to pick just one or two of them, but we do have some very strong memories especially for one gig this year, our first gig at the BPM festival back in January. We always wanted to play there and this year we had the chance to do that. As probably the most of you know the festival ended with a terrible shooting where some people tragically died. This happened in front of a venue more or less next to our hotel. This was, of course, something very frightening and so a journey that we will never forget. A second gig that we remember in a much better and more positive way was our first time at the HyperSpace Festival in Budapest. That was just a great night, where we’ve had lots of fun with a fantastic crowd, a super line up, and an amazing production team.

DG: Something I have been meaning to pick your brains about is “Another Dimension” which I think is your 3rd album? – Can you give me a breakdown of the album and the tracks and what this album means to you, where we can expect to buy it, and when?

KD: Yes, you are right. This is our third album. This time we made the decision to produce a complete club album. You will find 11 techno tracks on it, all of them absolutely dance floor suitable and of course already approved. After two albums with different genres and styles on it, we felt like it’s time for a straight club and techno album. You won’t find any tech house or deep house tracks on this album anymore. This is why we called it ‘Another Dimension’.

Thinking about another dimension and looking for track names, which is not very easy sometimes, we found this dimension in outer space at the end of our solar system, called the ‘Kuiper belt’ with many dwarf planets belonging to it. All the track names are taken from these dwarf planets or orbs. The album will be out on Christian Smith’s label Tronic on the 13th of November. It’ll be available on any usual and established digital music download shops, of course on streaming platforms like Spotify and last but not least there will be a limited vinyl edition, stripped down to our most beloved four tracks taken from the album.

DG: With a wealth of experience and wisdom you guys are of course the right ones to ask for tips and guidance for our up and coming readers that are producers/DJ’s trying to make it onto the scene. What advice would you give them in a very difficult market?

KD: Our first advice is to think about this twice and to realize what it means to be a DJ and a producer. If you really want to do this professionally, it means to be on tour at least every weekend. So usually you won’t see or spend time with your friends, family or partner at the weekend for many years. There is, of course, a lot of work to do during the week as well and a studio day can be very long.

So at the end, we just want to say that being DJ’s and producers is definitely a 24/7 job which you should and can only do if this is your real passion. If you are aware of all the above and know how hard but rewarding it can be, then do it, and with all your energy, love and passion. Stay strong and persistent. You produced a new track, sent it to a label and received no answer? Don’t be frustrated, it’s maybe not that they didn’t like it. Probably they haven’t listened to it yet. Bother the people you want to work with, because remember we are all only human and have a lot of work to do.

If your work is good, you’ll find a label which will release it at the end. So all together we just want to say: “Stay strong and never give up”.

DG: On both a production and DJ front what can we expect from you guys for 2018, anything exciting to tantalize our earbuds?

KD: As our new album will be out in November we’ll be touring and presenting it all over the world and we’ll play as many gigs as we can. Production-wise, we just finished two new tracks and are working on a third one, so a new EP is almost done, but we can’t say anything about where it’s going to be released at the moment. In November we’ll have our buddy Karotte in the studio to work on the next collaboration with him. We also did a track with him on the LP called “Namaka”. We also just talked to Thomas Schumacher who came up with the idea to join forces, so there will be an EP together with him probably in the first half of 2018.

And last but not least you can expect a remix package of selected tracks from our album, approximately four months after the album release, with loads of talented artists onboard.

DG: What producers are you really feeling at the moment, any hidden ones we need to know about and keep an eye out for?

KD: We had the chance to sign some great artists on our labels and a lot of them are still releasing amazing tracks. We always keep an eye on Alex Costa, The Southern, Alex Mine, D-Deck, Stephan Hinz, Markus Suckut, Truncate, Carlo Ruetz, Luca Agnelli and much more.

DG:   Last question before I let you go, what is your all-time top 10 tracks and why

Too hard to pick just one track. It’s a timeless and outstanding piece of electronic pop music with amazing compositions on it.

Still one of the best tracks for a lazy Sunday chill out.

A masterpiece for every songwriter who’s thinking too much about a song text. Sometimes it can be as simple as that.

They showed the world how to work with a compressor and using its side chain to let the music pump as never heard before.

Our first EP on our own first label, forever something very special to us.

One of the true techno heroes who still inspires thousands of people. Still, no one beats him on the 909.

The original track is such a great pop song but the remix from Tiefschwarz even tops it!

This track still reminds me of the great time when techno got big in Hamburg and we went out from Wednesday to Sunday to the party as much as we can.

Next to Metro Areas ‘Mirura’ is King Britt´s remix of ‘Contemplation’ is one of my favorite house tracks. Timeless bombs which I try to play from time to time when we have the chance to play after hours in the sun.

Holden – A Break in The Clouds – Main Mix

Production wise this track has inspired me so much! Fantastic drum setting and great click and glitch sounds plus a super sounding catchy melody!