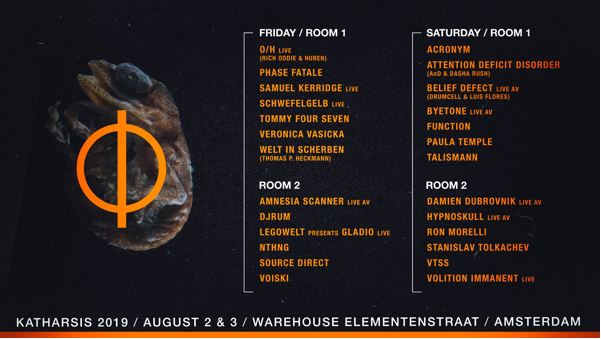 Reaktor events present the anniversary edition to Katharsis, which will be held another year at Warehouse Elementenstraat on the 2nd and 3rd of August. The name refers to ancient Greek philosophical concept “purification of the soul through art”, the festival will surely hypnotize its audiences with the dark side of performance art through a diversity of live performances and a multitude of different genres.

Friday will see Tommy Four Seven give a masterclass of the realms beyond techno. The 47 label and event head has recently toured for his latest album ‘Veer’, the cutting edge industrial atmospheric sound’s and ominous noises will be something he will defiantly bring to his performance. Techno body music connoisseurs Welt In Scherben, Schwefelgelb and Phase Fatale will also be performing. German figurehead Thomas P Heckman, the legend of contemporary techno and acid music, started his Welt In Scherben project in the ’90s. He will surely be propelling that 90’s rave spirit onto a jubilant crowd. Legowelt’s famed Gladio alias will bring his flamboyant, unique style into a hardware style frenzy, only recently releasing a Gladio album on L.I.E.S for the first time in 11 years. Other Friday performances will be included from the talented O/H, Veronica Vasicka, Amnesia Scanner, DJRum, Nthng, Source Direct, and Voiski.

Another day of extraordinary boundaries being taken from the underground music scene will see the combination of two heavy and relentless acts, AnD and Dasha Rush as Attention Deficit Disorder. AnD’s style of performance that is enraptured by a tenuousness and aggressive sound with Rush’s independently slick style will give a memorable performance. A regular and could say the queen of Katharsis, Paula Temple will be invited to execute her many years of eye-watering, transcendental past performances of the festival all enrolled into one. Stanislav Tolkachev will be enlisted to perform another one of his famous, compelling sets that will predict to enslave audiences into a euphoric frenzy. Additional masters of their craft to perform on Saturday will be VTSS, Acronym, Belief Defect, Byetone, Function, Talismann, Damien Dubrovnik, Hypnoskull, Ron Morelli, and Volition Immanent.

Tickets can be found on the  Katharsis Facebook page or on Resident Advisor.