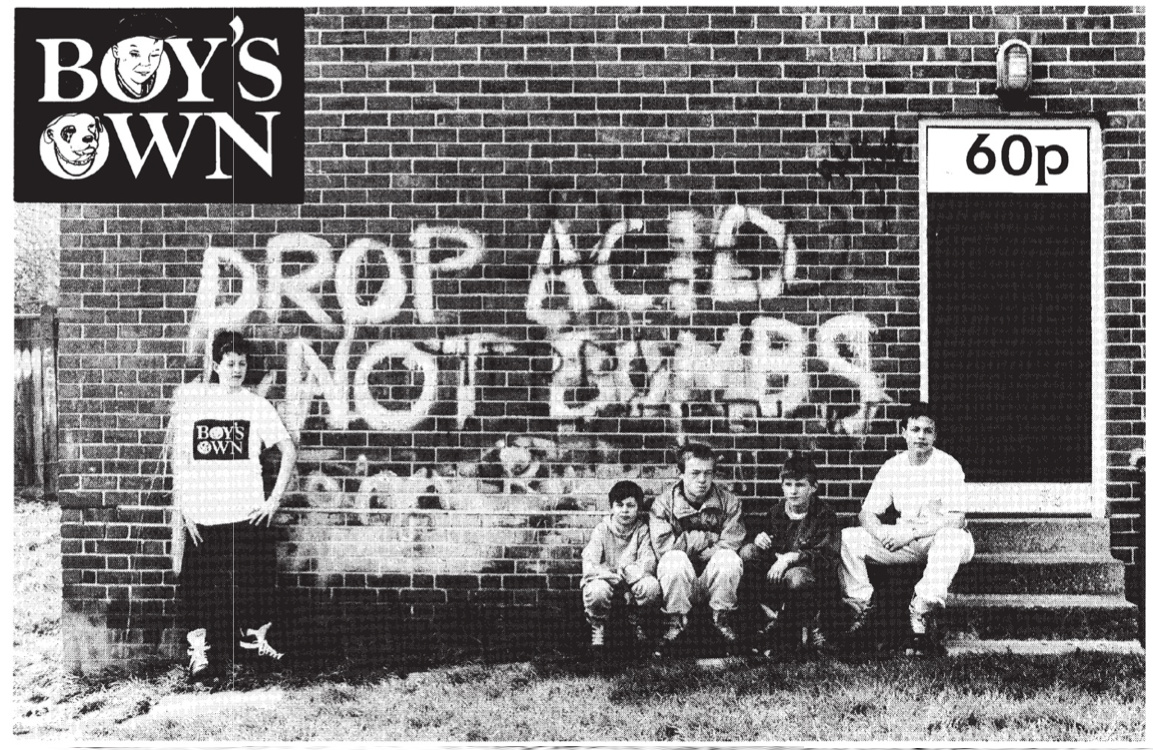 Before ‘Mixmag’ before ‘DJ’ before any other fucka, the ‘Junior Boys Own’ crew had their finger on the pulse of the Acid House generation printing the very first fanzines on the embryonic dance scene and football, they also had a young Paul Oakenfold writing for them.

This crew have been in the thick of it since the beginning and really know their stuff…..

Mike Mannix: Nice one Terry thank you for talking to us at iconic underground. Give us the background on growing up in London in the 70s and 80s socially musically politically and how it defined and moulded you.

Terry Farley:  I loved and still Love London culture. I’ve been lucky and travelled the world and it’s a unique city. Musically it absorbs sounds from around the globe and spits them back out in a brash cockney market trader way from ‘Skiffle’ to ‘Grime’ it’s an attitude that shines through and remains authentic whoever or wherever the latest residents come from.

As a kid we had Irish neighbours on one side and Jamaicans on the other and in the holidays my nan would serve up a mid-morning snack for the kids from both sides (funnily enough we would all sit on the roof of the air raid shelter from WW2 that stood at the bottom of her garden in Latimer Rd. – she kept chickens inside for the fresh eggs).

You would hear music everywhere from the reggae stalls at Bush market or up Ladbroke Grove to the Irish fiddlers in the boozers on Hammersmith Broadway and the older Flash Herbert’s playing Motown loudly with the windows open.

MM: At that time in the 80’s the UK had its fair share of political injustice, poverty, and lack of anything resembling opportunity, just a dull grey filter of mediocrity disguised as conformity, with the only real outlets for youth to vent the excess energy were the football terraces, booze, limited drugs, left-wing politics, fashion, fanzines and music and then came the acid house revolution, had you seen it coming, and how much did it affect your life?

TF – Londoners have always made their own opportunity. My family were market trader grafters and my old grandad told me ‘ you never go hungry if you’re ready to get your hands dirty.’ If you can’t make money in London then you need to give up that was as true in 82 as it is today. I never felt disaffected, we did what we did at the match cos it was ingrained in the culture of the area you grew up and it was a buzz not as a reaction to anything.

Work all week and spunk your wages on a new shirt from the king’s rd and head ‘up west ‘ to where the best dancers and sorts went – time honoured tradition and 70s soul/disco was perfect and was our music and time.

kids like Nancy Noise and Trevor Fung, they went back in 87 and by then E was massive on the island

it was that cocktail that’s ACID HOUSE – E / STROBES / HOUSE / POP AND ROCK DANCE ( BALEARIC ) and that funny easy to do ‘Trance Dance ‘ that exploded in London in the early months of 1988. House itself was always part of the soundtrack (Frankie Knuckles had a summer residency in London in 87) and clubbers were taking E in certain trendy spots from the mid-80s but it needed the connection and mass consumption for the explosion.

MM: What was the inspiration for the label ‘’Boys Own’’

TF:  A scouse fanzine called ‘The End’ and all the clubs our lot loved going to not wanting to let in anyone dressed like football lads. We would get off the late train from some away day up north and have to change clobber to get into say ‘The WAG’ or ‘Le Beat Route’ – didn’t seem right that we had to do that in our city.

MM: Who was your biggest inspiration in the studio and what kit was essential for production?

TF:   Oh loads Frankie of course – he’s the source and inspiration for EVERYTHING that’s good in HOUSE music culture. Today I always check and buy the latest stuff from KINK, OSUNLADE, DIXON, A’ME  HONEY DIJON, DERRICK CARTER – also I’m a sucker for all those from the ‘Master Tracks Mixes’ that John Morales and Dmitry from Paris (oh and of course Joey Negro) does.

When Pete and I had our studio over Wapping

we had a lovely 24 track Neve desk that gave the best vintage sound. We used a sp1200 drum machine, Mini Moog for the bass and a vintage keys outboard rack

MM: How big of an impact did ‘E’ have on the average punter’s perception, expectations, worldview and musical tastes?

E changed EVERYTHING…  It changed the game from a cool underground to the whole country going mental. ‘E’ still fuels just about every decent party worldwide

MM: Did you ever get a rush so massive at an event or gig you played at, that made you question your very existence?

TF: What spiritually or illegally lol, the latter certainly mid-90s leaving Webster hall in NY with a crew of E aficionados from San Fran

– almost did literally on the floor dancing to Junior Vasquez that night. Natural highs from playing are usually mixed with waves of panic I still get very nervous before playing records – but when it goes well and I can connect with the crowd on that primaeval level

the fear morphs into a rush which is always a bonus

MM: From Paul Oakenfold writing in your fanzine about the Acid House the first in British media to you running the first Acid House raves, how did that all gel together, did you see it then as pioneering or just having a laugh?

TF:  We become evangelical about it. It was like a super-secret that only 150 people knew about. People even told others not to talk about it but

it was too amazing not to tell the world

MM: How do you see the London Underground today and Dance music as a whole, has a lot changed since the rave days, the bond the emotion. Is it because of connectivity and instantaneous access to tunes, different drugs maybe the prevalence of coke, have we lost something?

– the right parties however still retain those emotions and bonds – the major issue with London clubbing is the same issues as all major cities clubbing face. Gentrification / DJ Agents either wanting stupid money or doing exclusive deals with the highest bidder.

What we have lost and what can’t be replaced is the innocence that most kids had before walking into their first Acid House adventure that innocence was a one-off thing in 88 – 89.

MM: What advice would you give the aspiring DJs Producers today in an already saturated market?

TF:  Same as it ever was – start your own night create a gang with strong core principles and stick with it you might be lucky like we was.

TF: I only did Acid once and hated it. It was just a slogan we liked and picked up on.

MM: What your thoughts on the Orange Menace abroad and current world affairs?

TF: Trump is an utter wrong un and the republican party need to get him on a leash and quick. I was deeply upset by this weekend’s events in America with those hillbilly tramps marching through other people’s town spouting racist bollocks. Religion once again being used by religious fascists ISIS to terrorise an entire region and in my city. I think

MM: What’s coming up soon with the labels and group in general, spill the beans?

TF:   ‘Boys Own’ have launched a new website www.boysownproductions.com  we have been reissuing some of our classic Ts. I’ve had a busy summer playing around a bit – Ibiza / Italy / Australia / Amsterdam etc and have a new 12″ out soon co-produced with Kevin Swain on WE LOVE ACID Records.  I’m blessed to be still in the game I love and playing music that is important for me to share.