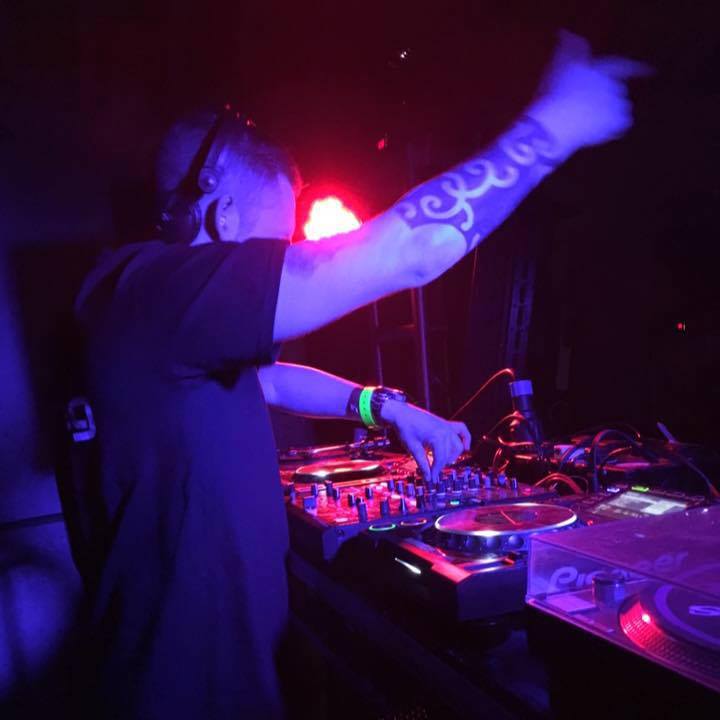 September 29, 2016 Off By Iconic Underground

DaGeneral has been a name that everyone has started taking notice of over the last 18 months! He has charted multiple times on various labels and has been taking bookings across Europe.  Exciting times seem to be ahead for this busy guy, so it made sense for Carl Antony to meet up with DaGeneral and ask a few questions.

Q1) You’ve had an amazing year so far notching up releases on labels such as Layer 909, Alchemy,  Se-Lek Music, Krafted, We Are Music, Mirabilis and many more. Add on top of that running your own label General Surgery Records, doing your radio show This Is Techno LIVE and any other plates that you may be spinning. How do you keep up the relentless energy levels?

There is never enough time in the day, I have to try and split my time between various things. I am fortunate to have support in all things I am involved in! I have Victoria Ball (Perfect Promotions) who looks after all the PR/Press stuff for DaGeneral and manages the social pages attached, and of course now manages my bookings for me. The biggest benefit is Victoria ensures that I am always keeping things in place and organized and probably saves me on average around 12 hours per week I didn’t have before.  Of course Lucy and Michael (Paul Rodriguez Music Ltd) look after all my publishing for DaGeneral and General Surgery, and have been key in ensuring that all contracts are tight and correct, once again saving me time which of course is like gold.  This all round helps me to free up time to spend more time in the studio working on new tracks and remixes.  But the secret is I don’t get that much sleep, I spend a ridiculous amount of time on music based work! I am a believer of hard work pays off and you get out what you put in.

Q2) Having your collaboration track with KoZY, entitled Number One, released on Alchemy and then added to the ‘From Ibiza To Your Heart’ continuous mix, that was expertly mixed by one of dance music’s biggest names in Mauro Picotto, is an amazing achievement. What was the buzz like around the DaGeneral camp when you heard this was going to happen?

Was good news all round not to mention our remixes of Mauro Picotto ft Barny Scott – Ayala which are released on Alchemy as well available from the 14th October. Was some good teamwork from myself and KoZY knowing exactly what sound to create and how to submit it.  To be honest it was a bucket list thing for me as Mauro is one of my idols, he is nothing short of a legend. Was great working with KoZY on these tracks he is a great producer and we gelled well to get a sound that we were both happy with.  Of course though I don’t like looking backwards and already looking forward to hitting the next set of achievements, as every achievement is only a small cog towards bigger goals and aspirations.

Q3) As mentioned earlier, you have a monthly radio show called ‘This Is Techno LIVE’. You’ve had some of the world’s best talent feature on your show such as Mauro Picotto, UMEK, Skober, Phutek, Lisa Lashes and many more. For the readers who haven’t tuned into your show, please let us know what This Is Techno LIVE is about.

This Is Techno Live is a monthly radio show that I run with the founder N.K.D. with resident Jon The Dentist, and we endeavour to get get some of the best techno and tech-house music each month to our monthly listeners.  We have grown over the last couple of years and have a really great set of listeners that tune in to the show each month.  Without the listeners though the show would be nothing so I would like to say a big thankyou to everyone who tunes in.  Of course the latest addition to this is that we now have a “This Is Techno Live” compilation series starting November in association with Se-Lek-Shun’s album series.  You should be able to expect the compilations to come out bi-monthly with some great underground music for your listening pleasure.

Separate from the monthly show I also have just tied up a new deal with a radio station in Ibiza to have a weekly show also named “DaGeneral presents This Is Techno Live”.  This will be on 6am Ibiza Underground which also hosts some awesome artists including: Tom Hades, Jewel Kid, Lisa Lashes, Marco Bailey, Eric Sneo, and many more.  So keep an eye out for the weekly sets featuring on the weekly show which will have the same ethos and ideas that the monthly show currently has.

Q4) Looking through the list of names that you’ve had the pleasure of playing alongside in the earlier years of your career, names such as 808 State, Alex Kidd, Modjo, Mark Sherry and many others. How did playing at the same events as these acts help shape your career?

Yeah every experience is a different one and every single aspect of life changes the outlook on what you do, I feel that playing alongside artists helps this but really in my opinion that is just a small part of it. I have played alongside many other great artists’ that you of course haven’t mentioned.  However, I do think that in the early day’s I was fortunate enough to play alongside the artists that you have mentioned and think the greatest thing to take from this during the early days would be the wealth of experience gained working alongside these big names.

Q5) You took the route of being a DJ first then becoming a producer afterwards. I’ve seen debates about whether DJ’ing first is the better way to go about becoming producer. Although, with production equipment being readily available to anybody, it can be seen as a non-argument. Do you think that being a DJ first before starting music production helped you?

Of course for me it did yes, I think haven’t the understanding of what DJ’s like to hear and how I as a DJ would like a track to build was a big help for me.  I am not saying that it is better to start as a DJ then become a producer second, but in my opinion it helps understand what you like in an end product before trying to produce it.  I guess this is all relative to each person and what is good for me is probably not good for the next person.  I guess now that a lot of it is digital, it is more readily available for everyone to have and purchase the equipment required to start learning their trade rather than needing to book studio time and engineers to get the result they require.  However, this doesn’t mean you should just throw music out there and it is a lot quicker, you still need to learn the key elements of making a track and have the skills to create and mix down your track to a professional level to get anywhere with it.

Q6) You’ve done quite a few collab tracks this year with talented artists from different parts of the world such as Rivet Spinners, KoZY, Bageera, Blue Amazon, Moggi and more. How did you manage to create such a network of talented producers and do you feel collabs work for you?

Networking is key, I have just been fortunate enough to be able to network very well, and then of course be fortunate again for these guys to want to work with me.  I can say the guys mentioned are excellent at what they do and not only did I enjoy doing collaborations with them, they have helped me learn and tweak my own production along the way.  I suppose they should get some gratitude on how they have helped shape me as a producer as time went on.  I have probably said this before but Lee (Blue Amazon) has been a great help in pointing out flaws in my production work and pointing me in the right direction to ensure that I get things right, which meant a lot to me rather than just saying NO that’s not good enough. Bageera I should also mention was sick of hearing my kick drums in our collaborations, I think he removed around 90% of them at the start until I started making decent kick drums in my productions.

I think I see these guys not just as artists but also as friends, they are a great bunch of guys.

Q7) So, 2016 has been a steamroller of a year for yourself. And now it’s nearing to the final few months, have any plans been drawn up to shape up 2017? Will it be another big year?

Yeah totally I can already see releases and bookings in my calendar up until around June 2017 so looks like things are still getting stronger and going in the right direction.  I guess I should really mention my bookings for October since they are fresh and really look like they will be cracking nights.

First up on the 22nd you can catch me alongside Blue Amazon, Winter Son, and Higgins in Manchester for the ever growing B Se-Lektive nights that are happening across Europe just now

And then on 29th October you can catch me at Equinox doing an exclusive b2b set with Blue Amazon alongside, Shades Of Rhythm, Oliver Lieb, Phutek, Mike C, and Paul Montague! What a line up for Halloween.

Q8) And finally, here’s the BIG question now! If I can get 5k likes, 1k comments and 2k shares of this interview, will you collab with me?

Brilliant question, not even sure how to answer this as I think this likes/comments/shares thing is ridiculous! But I suppose if you can get 5k likes, 1k comments, and 2k shares of this interview I would do that collab with you of course, and can also guarantee that this interview has had some great exposure highlighting your excellent interviewing skills.