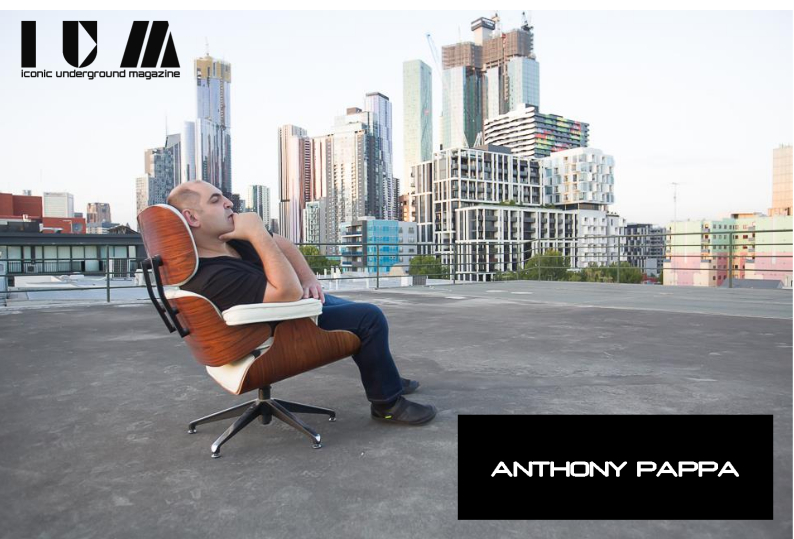 Anthony Pappa is certainly hot on the radar once again and doing it in style. The influence of DJs and artists that emerged from the exciting vibrant scene of the 90s are still playing an important role in today’s electronic music domain, often considered some of the pioneers of the scene and the foundation builders for what we have today, Anthony Pappa has certainly contributed to that and continues to provide an outstanding contribution.

Originating from Melbourne Australia, Anthony started making an impact on the club circuit in the early 90s whilst being known for his advanced harmonic mixing and creativity that would raise the eyebrows of fellow industry DJs. In ’94 after a period of playing the majority of venues around Australia Anthony decided he wanted to try challenge himself to the next phase of building his DJ career.

He entered a competition in the UK hosted by – Mixmag Magazine worldwide in conjunction with the based London Superclub – Ministry Of Sound. It boasted a prize of playing at the legendary London club from the submission of a DJ set. It was this competition that he won and went on to play at the club in October ’94. The experience of playing at Ministry OF Sound was to have such an inspiring impact, that he soon decided to relocate to the UK.

He soon became quite a prevalent name and important player within the UK whilst touring up and down the country at many of the major clubbing venues such as Renaissance, Cream and Ministry Of sound, entertaining the country with his slick fluent mixing style.

In the UK the very emerging brit sound of progressive house was building at a fast pace, with the likes of Sasha, John Digweed, Dave Seaman at the forefront with Anthony also becoming one of the big contributors of championing the sound. He also went on to work alongside Dave Seaman who was A&R at Stress Records (part of the Mixmag / DMC organization) and become part of the team.

The rise of the DJ mix albums had started to play an import factor in the UK and the international circuit, and once again Anthony was playing a role in its progression whilst contributing crafted Mix/compilation albums for series such as – Global Underground, Renaissance, Balance, Platipus Records, and DJ Magazine.

Music production-wise the very notable and fair to say hit – ‘Freefall’ Featuring Jan Johnston – Skydive is one of Anthony’s productions as well as collaborations with Barry Glibly – such as void and validate, and remixes for Route 66, Chicane – Offshore 97 and some cool bootleg / DJ mixed – tracks.

We managed to catch up with Anthony and get further insight to his great career, opinions and current/future activities. First of all, Anthony thanks for the interview and welcome to Iconic Underground Mag. Let us dive straight in and bypass some of the usual background type questions.

Lee Softley: You were very much a part of a special time in the ’90s that was very inspiring and impacting, what keeps you driving forward as DJ now?

Anthony Pappa: DJing and music for me is my love, my passion and has been what l have dedicated most of my life too. It’s what l do, it’s who l am it’s just me. I could not imagine or see myself doing anything else. I love what l do, it makes me happy and l love the fact that what l do gives so many people so much joy. This is what keeps me driving forward as a DJ.

LS: The electronic scene has very much evolved, technology and even social media plays a big part in music now, what’s your take on where we are at?

AP: I think it’s amazing how much the scene has grown and taken off all over the world. Technology will always keep evolving and we need to keep moving forward with it and use it to our advantage. Social Media has made a huge difference in how we share news, promote our events and music. You can be from any part of the world and through the Social Media network get your name noticed on a global scale instantly. Years ago when DJ’s were touring the world in the ’90s the only way to build up your name and get people following you was to go from city to city and country to country and from the gigs that you did people would then know who you are to follow you. Social Media has made this all so much easier to do.

I could not imagine or see myself doing anything else. I love what l do, it makes me happy and l love the fact that what l do gives so many people so much joy

LS: With so much access to music and DJ sets in the modern-day, do you think this is a challenge for DJs to offer that bit more and push the boundaries further?

AP: I think DJ’s should always be aiming to do that anyway. You need to give 100% every time you play. Yes, there is so much music around these days and so many DJ’s so you need to be totally dedicated to what you do. You only get out what you are prepared to put in so hard work always pays off in the end.

LS: There’s seem to be a lot more pressure on DJs to also have a very high production output these days, Do you think you can still maintain to be a focused quality DJ without releasing singles / EPs consistently?

AP: l think you can but it’s becoming a lot harder to do. Producing music these days is so important to maintaining a DJ’s profile. Its something that l know l need to do more of and am working on productions at the moment.

LS: You seem to very active touring again which is great to see, was there an inspiration or motivation to drive you forward in this area recently?

In 2016 l was involved in a very serious car accident. I honestly thought this is it l am going to die but l was so lucky to survive the accident. I had 2, broken legs, a broken arm and 2 fractures in my back. I broke 7 bones in total. I was in hospital for 4 months and after that had to do 2 years of physiotherapy learning to walk again and rebuild myself from the injuries. I feel that from surviving from the accident that l had been given a second chance in life. The thought of losing everything has made me realize how precious life is and that you need to make the most of it. It was a forced break from DJing for just over 2 years so l am now getting back to what l love doing.

LS: You have played many clubs worldwide if you could list 5 venues that were important to you which would they be and why?

It was my first ever gig in the UK which then inspired me to move from Australia to the UK.

Renaissance was a club that l always wanted to play at. The Sasha & Digweed Renaissance Mix CD was so inspiring to me, so playing at this club was a dream come true.

My first ever gig in Ibiza was at Pacha.

Twilo was my first ever residency in the US and it was an amazing club.

I also had a residency at Womb and on one night whilst playing an 8-hour set there my dad was at the gig with me and it was a very special moment.

Renaissance was a club that l always wanted to play at. The Sasha & Digweed Renaissance Mix CD was so inspiring to me, so playing at this club was a dream come true.

LS: Which artists and labels are currently doing it for you right now?

AP: There are so many artists and labels these days. More than ever so l will list a few. Artists – Audio Junkies, Budakid, Jeremy Olander and Jamie Stevens. Labels – Selador, Bedrock, Poker Flat and Last Night On Earth.

LS: You have always been known for you’re technical mixing abilities but would you say you pitch into a certain style musically?

I’m probably most known for my Progressive House style. I play Tech House, Progressive House, and Techno. It really depends on what time of the night my set is to how l decide what music is best suited.

LS: For the technology, fans reading, what is your preferred DJ set up and is there anything new that you would like to try?

AP: This is my choice of set up to perform.

There are so many other ways to DJ but for me, this is what l am happy with.

LS: You are based back in your home base of Melbourne, How is the music scene in Australia right now and who stands out in terms of events, artists or other DJs?

AP: The music scene in Australia is great. We have a very diverse club culture from clubs to many festivals. To mention only a few in Melbourne there is Rainbow Serpent Festival, Babylon Festival. In Sydney, there is Return To Rio Festival, Electric Gardens Festival, Space, Days Like This Festival. In Perth, there are events called Habitat which are club nights and also festivals. There are also a lot of great club nights but too many to mention. Some of my favourite Australian artists are Jamie Stevens, Mark Craven, Liam Sieker, Rich Curtis, Matter, and GMJ. My favourite Australian DJ is Phil K.

LS: How can we book you for a gig these days? Are you self-booking or via an agent?

AP: I am booking my own gigs these days so the best way to contact me is via email or messenger. For the time being, doing my own bookings has been good for me to not overload the work schedule so l can control the number of gigs l do as l have been getting myself used to being on tour and DJing again whilst l was mainly focusing on my recovery after my accident. The way things are looking for bookings and inquiries at the moment it won’t be long before l will need to hand it all over to a booking agent.

LS: If there’s one venue, festival or even featured radio show you haven’t already played but would like to, which would it be?

AP: I would have to say Kappa Futur Festival in Torino Italy.

LS: What does Anthony Pappa like do like to do outside of music? Other Interests or activities?

AP: When not doing music l enjoy spending as much time with my family as possible and catching up with good friends.

LS: Once again thank you for talking to us, can we finish up by asking you to share any exciting moments of the year so far and your forthcoming plans/activities.

AP: I have had an amazing start to the year with great gigs in New Zealand, Mexico, Hungary and in various cities in Australia. I have productions that l am currently working on for release this year. I am in the studio with some local talent from Melbourne, Gab Oliver and Vlado Vragovski on one project. I am also working on a track with John Graham aka (Quivver) and have plans to team up with Jamie Stevens as a new combined project.