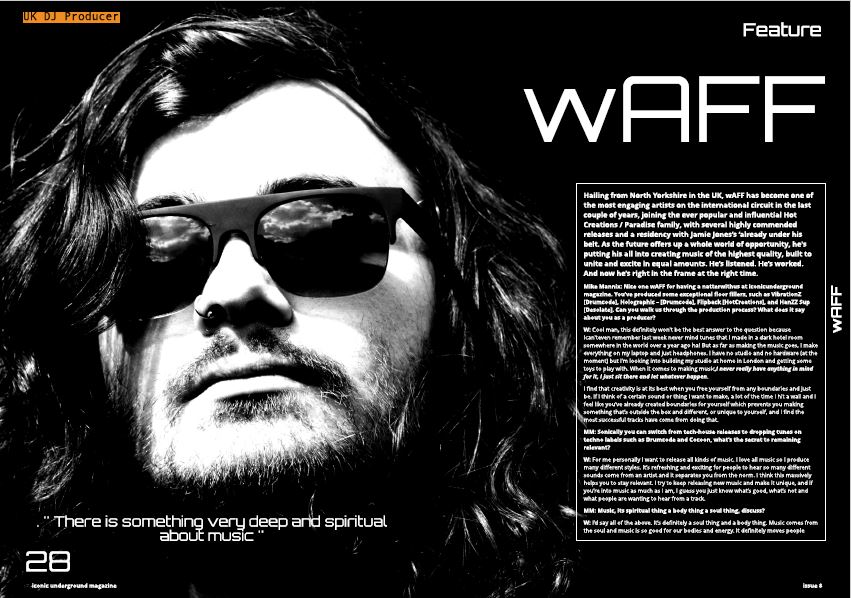 Hailing from North Yorkshire in the UK,wAFF has become one of the most engaging artists on the international circuit in the last couple of years, joining the ever popular and influential Hot Creations / Paradise family, with several highly commended releases and a residency with Jamie Jones’s ‘already under his belt. As the future offers up a whole world of opportunity, he’s putting his all into creating music of the highest quality, built to unite and excite in equal amounts. He’s listened. He’s worked. And now he’s right in the frame at the right time.

Mike Mannix: Nice one wAFF for having a natter with us at iconic underground magazine. You’ve produced some exceptional floor fillers, such as VibrationZ [Drumcode], Holographic – [Drumcode], Flipback [Hot Creations], and HanZZ Sup [Desolate]. Can you walk us through the production process? What does it say about you as a producer?

W: This definitely won’t be the best answer to the question because I can’t even remember last week never mind tunes that I made in a dark hotel room somewhere in the world over a year ago ha! But as far as making the music goes, I make everything on my laptop and just headphones. I have no studio and no hardware (at the moment) but I’m looking into building my studio at home in London and getting some toys to play with. When it comes to making music,

I never really have anything in mind for it, I just sit there and let whatever happen.

I find that creativity is at its best when you free yourself from any boundaries and just be. If I think of a certain sound or thing I want to make, a lot of the time I hit a wall and I feel like you’ve already created boundaries for yourself which prevents you making something that’s outside the box and different, or unique to yourself, and I find the most successful tracks have come from doing that.

MM: Sonically you can switch from tech-house releases to dropping tunes on techno labels such as Drumcode and Cocoon, what’s the secret to remaining relevant?

W: For me personally I want to release all kinds of music. I love all music so I produce many different styles. It’s refreshing and exciting for people to hear so many different sounds come from an artist and it separates you from the norm. I think this massively helps you to stay relevant. I try to keep releasing new music and make it unique, and if you’re into music as much as I am, I guess you just know what’s good, what’s not and what people are wanting to hear from a track.

W: I’d say all of the above. It’s definitely a soul thing and a body thing. Music comes from the soul and music is so good for our bodies and energy. It definitely moves people emotionally and physically, and I’d say spiritually too. I’ve had some amazing moments with music that were very spiritual and being affected in ways that are unexplainable. There is something very deep and spiritual about music. But yeah 100% all of the above are a huge part of music. Well, it is music.

MM: Everything in the universe is variations of vibrations [energy]frequencies all interlocking flowing, influencing, modifying all around it, is that how you see your participation energetically in all this?

W: Yeah I do, I think this applies to anyone who does anything creative. Creativity inspires and spreads, it’s contagious. I think people who become especially successful through music are an important part of helping and healing people. When I play music, yeah I’m just playing tunes and having a good time, but spiritually I believe that people zone into you and get inspired by you. They become positive because of you, you can lead people to further themselves to be creative or follow their dreams or whatever. It’s all part of it.

MM: You’ve played ADE, el row and HYTE which is really representative of your style as a DJ, being able to cross over to the underground and still appeal to the tech-house heads, was this intentional or just diversity?

MM: Do maintain your balance?

W: Ha, I don’t! No, I’m kidding, but it is a very difficult thing for me. One or maybe the most challenging thing for me personally in this life is to have balance. This life is so fucking hectic and mental, to achieve balance fully I think you need to experience years of imbalance, struggle and challenges to fully know how to become balanced. Unless you’re a normal, sensible and t-total person then you’re fucked basically ha! But it all comes down to picking your battles and taking care of yourself on the road. Exercise and eating well and most importantly getting the rest you need when you need it. But doing this job is a lot harder than people might think. Well, for me it definitely is.

MM: You’ve played alongside some greats in the industry. Tell us about those moments and how they have inspired you and your music?

W: Yeah I’m so grateful and happy to have had the opportunity to play with the people I have and it’s just getting so much better recently too. Becoming good friends with Jamie Jones and being part of his world is amazing, and I couldn’t have asked for a better thing. Now becoming a lot more involved with Loco Dice and his world is unreal and was a dream of mine from the beginning. He has always been one of my favourites so now to play b2b and alongside him quite often is quality.

I’m now getting to play with other big artist like Davie Squillace and Andrea Oliva. I’ve played alongside Luciano a couple of times too and spending more time around him so were now friends! So it’s pretty amazing reflecting on this and seeing where I was a few years ago to now. All of the above DJ’s have really inspired me and influenced my music, especially Jamie, Dice & Luciano. The music I’ve made recently has a lot of inspiration from Jamie and the way I play comes from Dice and Luciano. Massively. I’m also influenced by people like Villalobos, Tania Vulcano and Carola.

MM: What advice would you give the aspiring producer on how to be creatively original in an already saturated market?

W: Just be yourself, be creative and be unique.

I think every person has something unique to their own creativity and something special to give, so just be yourself. Don’t let anyone or anything make you doubt yourself and what you know deep down you can achieve. Never worry about what others think. Just be confident in your own thoughts and expression and if you are you will stand out and succeed.

Marcello Napoletano – A Prescription Of Love

The Libertines – Don’t Look Back Into The Sun

James Brown – Get On Up

All of these tunes have great memories attached to them so if I was stuck on an island forever I’d want music that brings back memories of and happiness, otherwise, I’d eventually get bored of all the tunes and been absolutely fucked with no music I like! ha

MM: What have been your biggest standout festival/gig moments where you thought ‘fuck this is real…’?

W: It’s always Burning Man for me, nothing ever comes even close to it. But besides that, I actually couldn’t even tell ya!

I can’t remember anything past a week ago pretty much ha!

MM: Techno, where do we go from here, what’s the future?

W: I’m wanting to release a lot more techno in the near future and play more techno parties, but I don’t think wAFF as an artist will become a ‘techno’ DJ as such because of my background and position in the tech house scene. I think I will probably do an alias at some point for the proper techno music that I want to put out. My taste in techno leans towards the sound that comes out of Germany; hard and industrial, so I can’t see wAFF as an artist being included into that world. You never know but I doubt it!

W: There really is no good story to it or thought that went into it! My last name is Wafer and I’ve been called wAFF as a nickname since school. Nobody ever calls me by my first name, which is Jon, so it just seemed right to keep wAFF for my DJ name too.

MM: What’s your next big project/collaborations/Album plans for 2017/18?

W: Well I’m working on my next Hot Creations EP at the moment. I’m also going to do more releases with Desolat, Drumcode and Moon Harbour for sure. Maybe Cocoon again sometime, we’ll see. There’s other labels I’d really like to release on but nothing certain yet. I’m going to be doing some music with Andrea Oliva, Nicole Moudaber, Cuatero & Guti hopefully, there’s been talks about other collabs too. I’d like to do something with Jamie Jones and Richy Ahmed sometime!