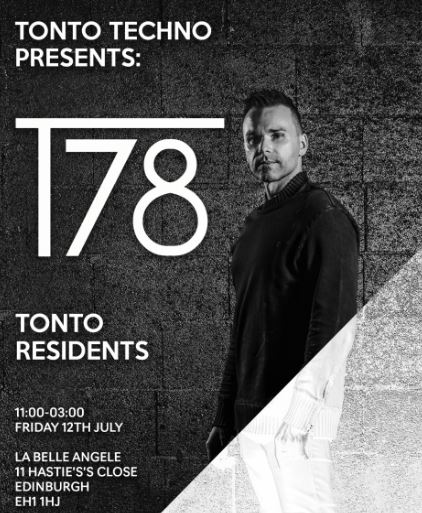 During the summer I had the absolute pleasure to be invited by Tonto Techno to check out one of their biggest events to date. From 11pm on Friday the 12th of July 2019 in Edinburgh’s La Belle Angele night club a massive Techno artist who is rising rapidly from Italy and is founder of the techno label Autektone Records, was about to perform a very special 3 HOUR set, the very impressive T78.

Having blown away the scene with his very own take on Techno by dropping his #ONLYBOMBS set of sounds, T78 came to do some damage. This wasn’t one of your ordinary Friday nights out in Edinburgh!

The night was fueled with energy and respect from the Techno fans as T78 dropped those all-important bombs all over the dance floor! Everyone I spoke to praised Tonto Techno for booking such an outstanding performer who literally, tore the club apart. Further into the night I managed to put a few questions along to those very sweaty clubbers, who indeed further praised the event holders for not only their booking but for their very own take on Techno.

Tonto Techno have not only been busy booking amazing artists to perform for their own events though, these talented trio have been playing out to the masses of Techno fans at festivals and big club nights also. EH1 – Colours, Elrow Town Edinburgh 2019 and Fly x Tonto Edinburgh. I can assure you there will be much much more!

Events held from the trio following the T78 night, has seen artists such as Gary Burrows who performed on 6th September @ La Belle Angele who also exclusively produced a 3 HOUR set.

I do have a surprise for you all though, what would be better than an announcement of yet another absolute BANGING BOOKING from these guys.

TYH – The Yellow Heads & I Am Bam – Yup you read that correct, pop along to The Liquid Rooms Edinburgh on the 20th December 2019 to check out this absolute massive movement that Tonto Techno are providing.

Artists & DJs Are Uniting In A Grassroots Campaign