The Warehouse Project [WHP]- FAC51 Hacienda Goes OFF in Manchester

Although super excited, to say Robbie and I were a little apprehensive on the drive up the M6 to Manchester was an understatement.

Could The WHP-FAC51 really be able to recreate the halcyon days and a Haçienda Revival, 20 years after its doors closed and 17 since the original building was demolished?  The venue, The Depot Mayfield was where old and new faces were to meet on the dance floor, to relive the experience…Haçienda style!

Most times the Old Skool events we’ve travelled to see, have not quite captured the authenticity of the original nights, and we were eager to see if tonight would be any different. 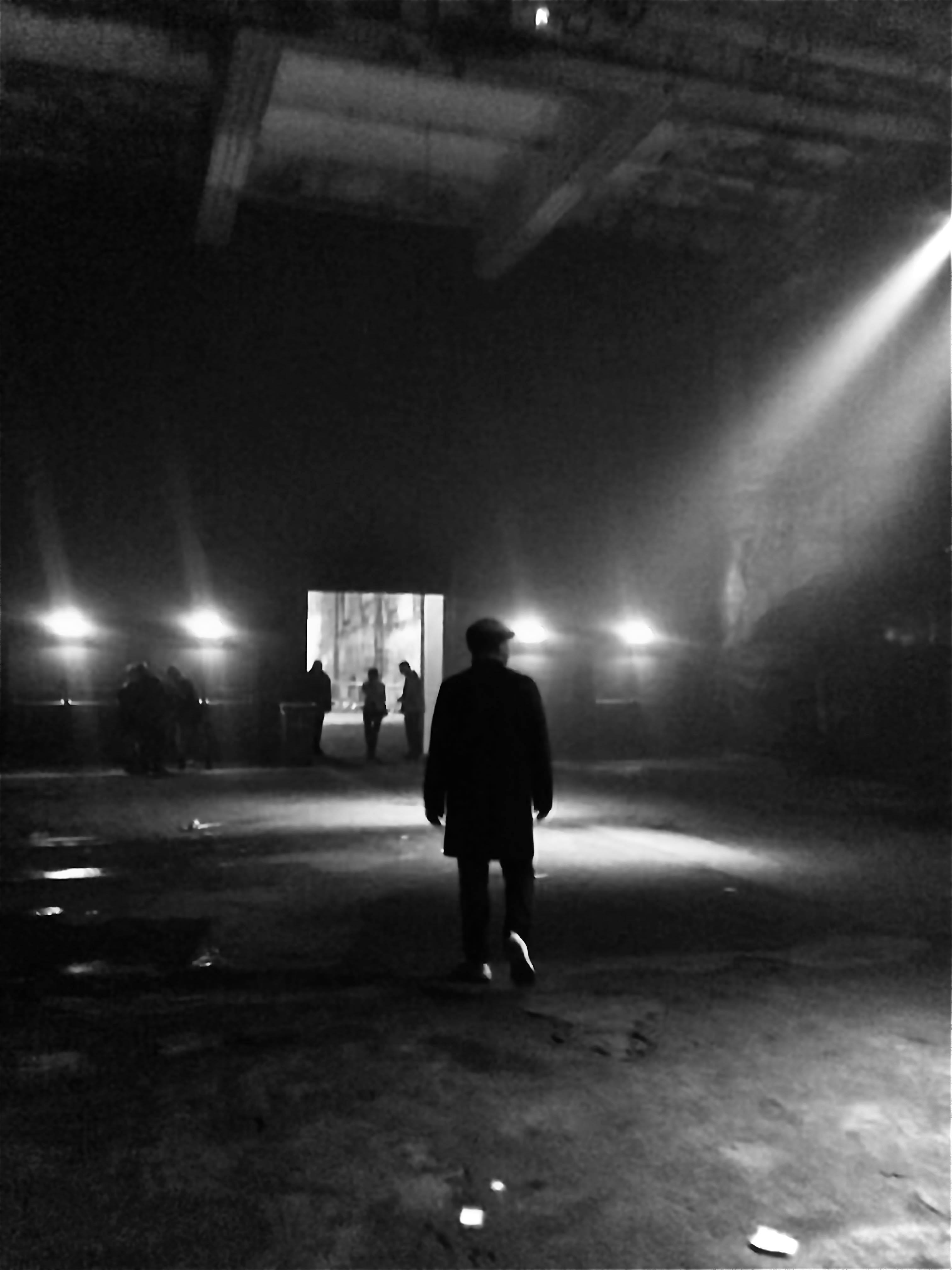 As a frequent visitor to The Haçienda back in the day Robbie knew how hard it would be to recreate that buzz, the atmosphere and the general love that exuded through that one building, which at the time seemed to be the heartbeat of an entire city.  The huge movement of people who were breathing and living for the sounds that would one day shape the future of Manchester’s house music scene.

| One building and one dance floor that instilled One love in so many people who walked through the doors. One of the most iconic music venues renowned worldwide, its legacy is now written in history – the infamous Haçienda.

Arriving outside, we could hear the usual thump of the music pumping through the walls from inside the venue.  It was our first time at The Depot so we didn’t know what to expect.  Standing inside a cold, dirty foyer, we were given our VIP bands and directed down a long, dark walkway, heading ever closer to the enticing sound of music pumping through the walls beside us.

Once through security, we were faced with one of my favourite features of the venue that night, no… Not amazing lasers, or something that cost thousands of pounds to install – for me it was the thick plastic sheeting hanging for doors at the entrance, the authenticity these added to the venue was the perfect touch.  Too steamy to see through it looked more like the entrance to an abattoir and it was difficult not to feel apprehensive at what awaited behind them, however once we pushed our way through there was no mistaking we were in the right place as the preponderance of bass hit us, forcing a deep intake of breath, one of those that forces a rush while you stop for a few seconds to take it all in.

| This place was DARK!  Dark and Dirty, with wet concrete floors and raw exposed brickwork surrounding you

Yet the smiles and excitement of the people rushing around making their way from dancefloor to dancefloor reassured you that regardless of your surroundings you were in a safe place.  I saw nothing but smiles from everyone I looked at, everyone I accidentally bumped into and everyone who’s toes I stood On by mistake – no Attitude … just love!

Behind another set of plastic sheeted drapes you could hear the unmistakable, iconic beats and vocals of none other than Soul ll Soul performing live on stage, this must have been a concert worth the ticket price in itself and sounded unreal.

I turned to see Robbie beckoning me to listen to what was coming from ‘The Concourse, an area situated to the side of the entrance.  l asked what it was I was listening for, his answer was simply –

| That’s the sound of The HAC – that’s how I remember it sounding all those years ago.

That’s the sound I’ve been waiting to hear again since the last time I stood in that place’! We had arrived, and I had a feeling that we weren’t going to be disappointed.

‘The Concourse’ was unreal, I can only describe it as like a scene from a movie, the cast perfectly orchestrated so that every single person in eyesight was dancing beneath a perfect lighting sequence, streaming and lighting up the entire dance floor, yellow and blue, showing clearly –

| Every single person in view, all-dancing like no one was watching, all smiling with their hands in the air

They all looked worry-free with no inhibitions like paid actors on a film set and giving it their best until the director shouts cut, except there was no shout of cut here, no actors, and they most definitely were not about to stop for anything other than to take a breath for a second or to close their eyes and take in the feeling of the infectious atmosphere which filled the long and narrow jam-packed dance floor.

It was hot, there was water dripping from the high industrial warehouse roofs,  wet floors  and a dancefloor enclosed by a dirty exposed brick wall on one side and the darkness of the raised VIP area to the other, a sea of people placed in between, bouncing to the beats being played through a huge flawless sound system.

We decided to Make use of our VIP passes and head up to the allocated section raised alongside the dancefloor to see what was going on, VIP areas are not my favourite places, standing around looking perfect with the cool kids isn’t my style, and expecting to be greeted by the usual VIP people in an atmosphere I’m not easy with, I was pleasantly surprised, as I couldn’t have been more wrong!  There were people up on the barriers, arms in the air, stomping away, and podiums with people not caring who was watching them dance, not one person thinking they were better than another, just a whole other level of people moving together to the beats. 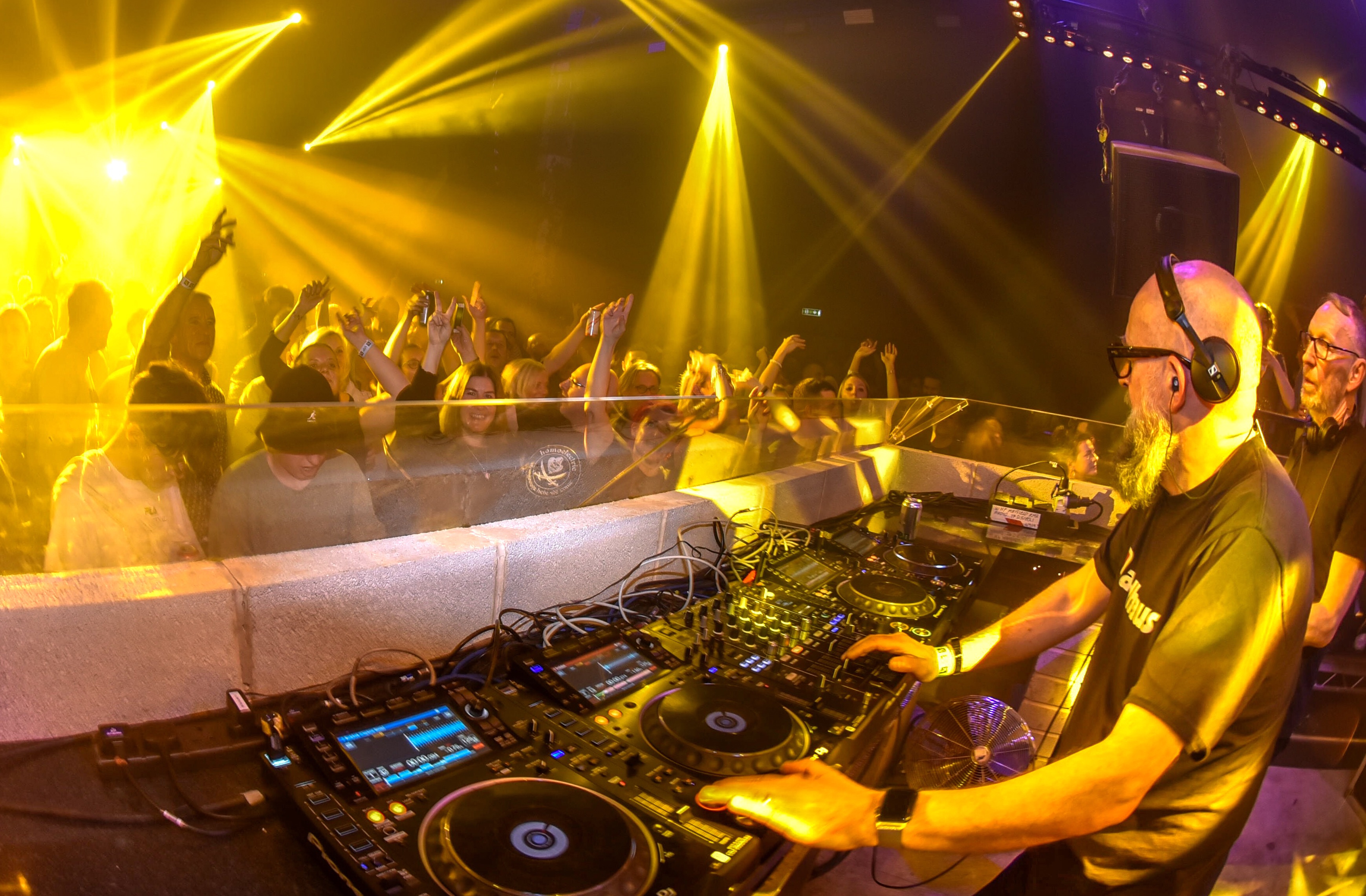 After desperately trying to get a glimpse of who it was that could possibly be controlling that dancefloor, we managed to make our way to the side of the DJ box, where it became obvious as to why the crowd was under such a spell, all mesmerised by the skills of Two DJ’s working a set together, a well-oiled partnership fused perfectly and delivering exactly what the ravers were asking for, two of Manchester’s finest pioneers of the original iconic House Music scene, Graeme Park (Parky) and Mike Pickering. It was obvious they were enjoying their set as much as we were, dancing around for the crowd as they played some timeless classics such as Kariya – let me love you for tonight and FPI Project -Going Back to My Roots.

Shortly before the end of the set we see Mr. Parks take his bow and showing his appreciation of the energy the crowd have shown so far, and he is whisked away to get to the main stage in time to start his classical set due to start next door, leaving Mike Pickering to work the crowd alone, which didn’t disappoint, by moving forward a decade or two he teases the crowd with the shapeshifters Lola’s theme, looping over and over again and building up to the beat dropping and the dance floor erupting and the walls begin to shake. 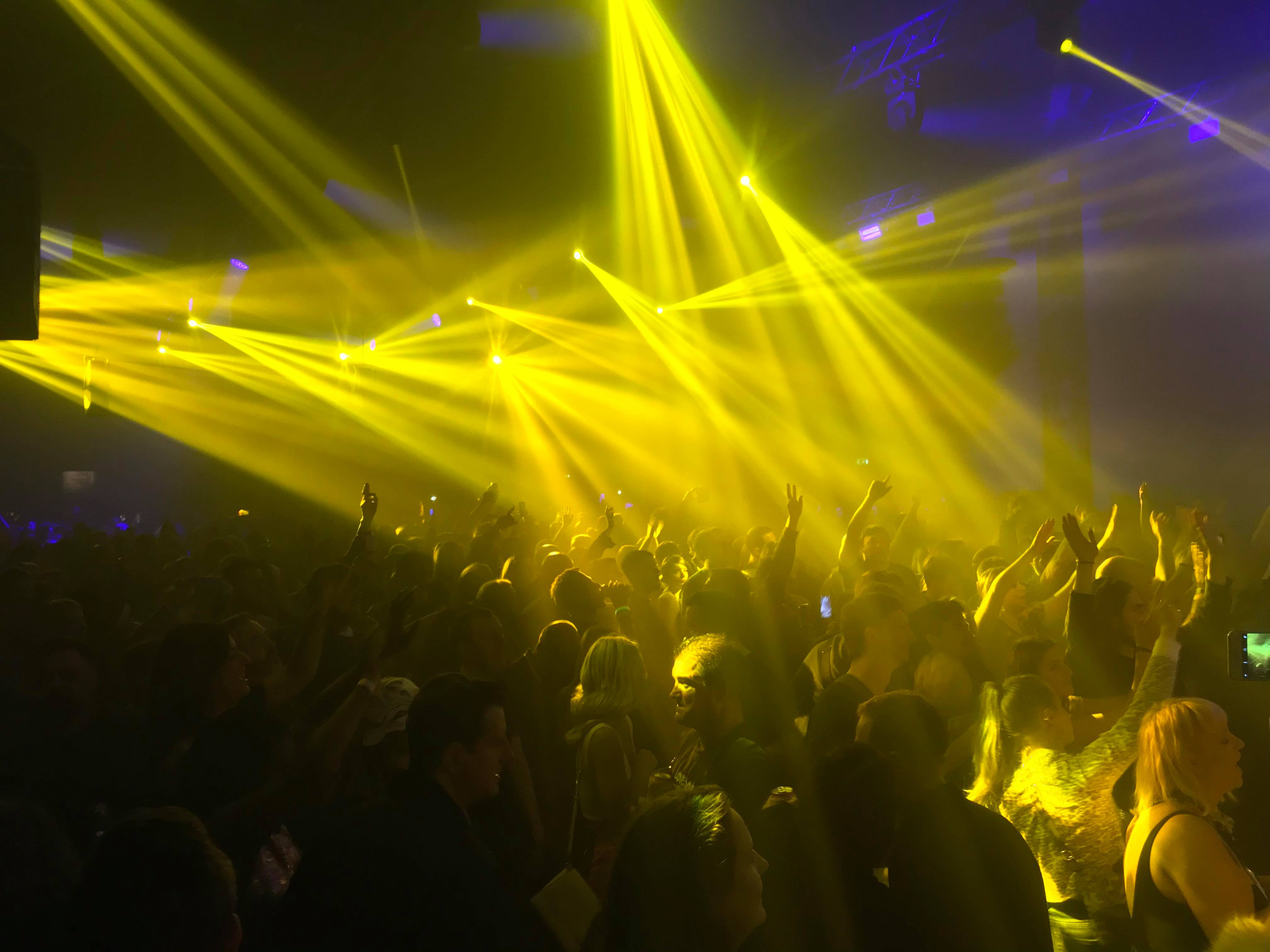 We decided we should at least go and have a look at the other room and what it had to offer, we were quite sure after spending an hour in the Concourse that it was more than likely that the other room would be the less busy of the two as it seemed to us the majority of the ravers must have been in that room we were in as it was just rammed full….  how wrong were we!

Walking towards the next set of thick plastic sheeting doors hanging from the brick archways between the two rooms, it was hard to see much ahead and as we slipped through the drapes we couldn’t quite get our breath at what we found!  When I say big, I don’t mean there were a few hundred crammed onto the dancefloor, I’m talking a sea of thousands of ravers facing towards a stage, stood in between huge steel girders lined along the length of the entire building with strips of lights streaming down in lines along the dance floor. I can honestly say I have never been to a venue as big as the depot, there were thousands of people, simply thousands I’m sure. 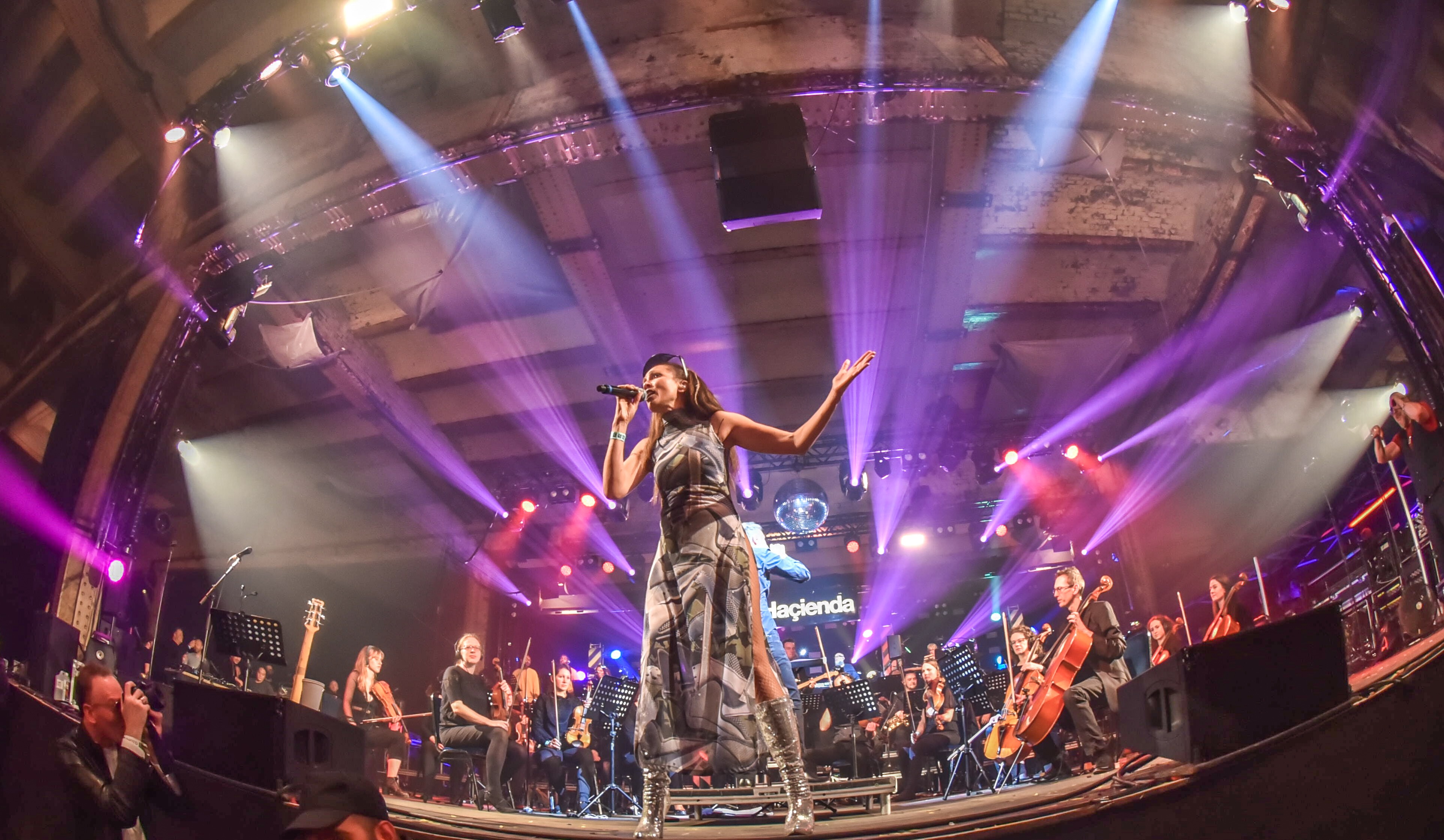 We walked around the outside of the dance floor towards the back of the venue to attempt to take it all in, you could hear the fantastic orchestra of The Manchester Camerata pumping out music as if it were being played by a DJ, note for note perfect and true to the original recordings with pitch-perfect vocals to accompany and a definite crowd-pleaser The highlight for me was the goosebump moment of hearing the piano riff of Alison Limericks ‘where love lives’– and the crowd going crazy, just Wow!

Justin Robertson was next in the ‘Concourse’ and another hour on the dance-floor lost in the music for the two of us! This set was definitely my personal favourite of the night, the highlights for me being the classic Energy Flash by Joey Beltram, 4 for the money- A moment in time and the one and only House Nation. 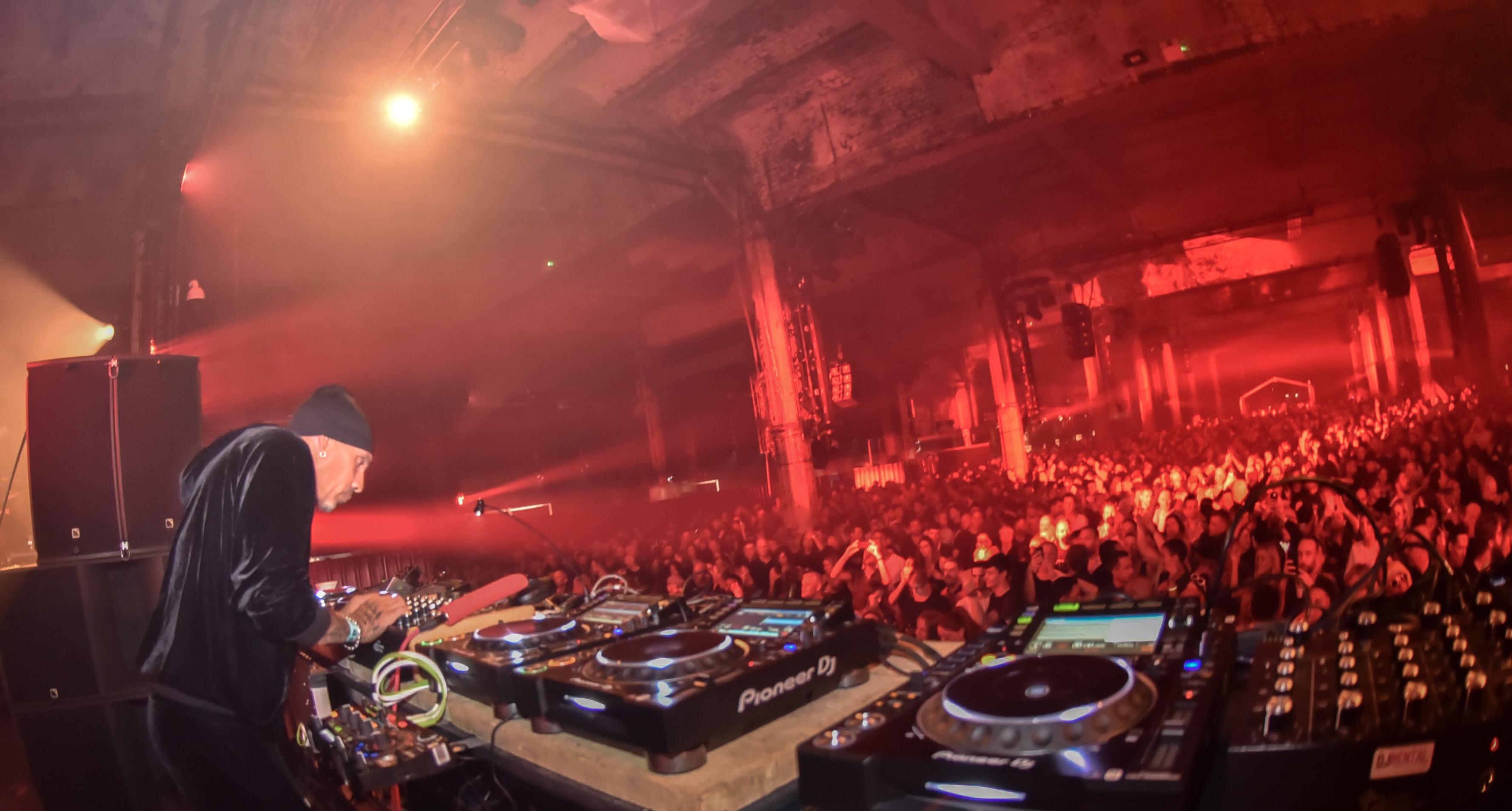 There were so many other DJ’s playing that night, and as always it’s hard to get to see everyone when there is more than one room! We missed out on Peter Hook taking to the stage to the surprise of the crowd and perform New Order’s – Blue Monday during the classical set, whilst Morales handed over to Louie Vega and taking the opportunity to playback to back as a special treat for the crowd whilst Marshall Jefferson closed the ‘Concourse’ in true Grandmaster style. 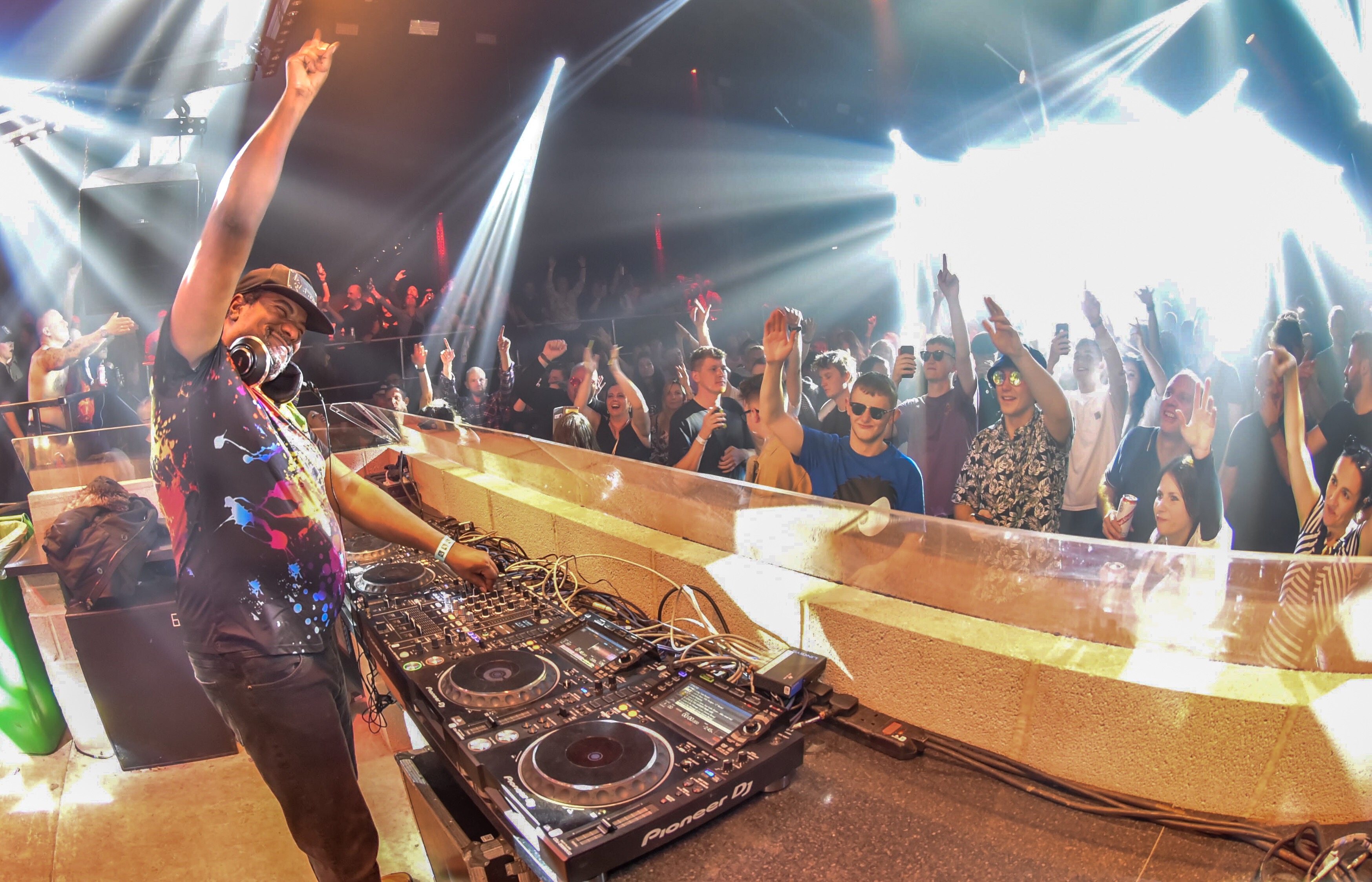 Our original reservations as to their ability to deliver a night that could reignite an atmosphere even remotely similar to the original Haçienda club were quashed as The WHP19 – FAC51 truly delivered and in serious style too.  The Depot as a venue in itself is faultless – if it’s dirty, dark and true oldskool style you like that is. With the production, performances, DJ’s and the general love and energy that flowed through the warehouse all night long It’s safe to say that The Haçienda spirit truly did come alive once more.