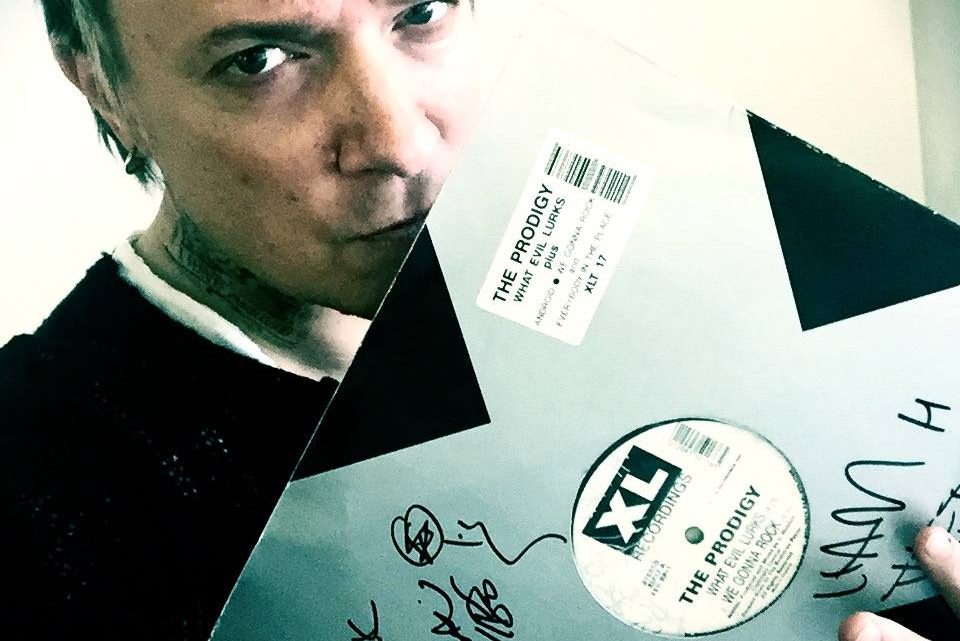 “What Evil Lurks In The Heart Of Men…”

Did you know that these are the first official ‘sampled’ words, coming through The Prodigy’s debut release?

It’s the first thing you listen to when you put the needle on the record. This quote is originally taken from an introduction line featured on the 30’s US radio show called The Shadow. And this does indeed set the tone for a record that was the beginning of the remarkable journey for UK’s groundbreaking band, The Prodigy, driven by the genius Liam Howlett.

Liam, under the name DJ Fame, started his musical trip at a very young age as a classical piano trainee. During the mid-80’s he was involved in a hip hop group called Cut 2 Kill. In 1989 he left the band and moved to Braintree in order to focus on the rave scene that saw the light in times when the second Summer of Love took over the…’system’.

It was a period when he was inspired a lot from this new movement while relentlessly going out to various rave parties and watching live acts like N-Joi, Adamski, and Guru Josh etc.

In fact, he wanted to express himself through this aspiring rave spirit, and promptly he bought a Roland W-30 and started experimenting on his own tracks, by sequencing, sampling and synthesizing.

The “raveolution” had just begun. It was as simple as that, you could be forgiven for thinking

When he finalized the first demo, he sent it to Tam Tam Records (the label that had signed Cut 2 Kill) but they declined it. However, XL Recordings (imprint of Beggars Banquet) that accepted his 10-track demo and the rest is history…

The official press from XL Recordings below, says it all.

The Prodigy is 19 year old Liam Howlett and XL RECORDINGS are proud to present his first excursion onto vinyl. Enjoy the pounding rhythms of ‘What Evil Lurks’, ‘We Gonna Rock’, ‘Android’ and ‘Everybody In The House’. More meaty beats from XL RECORDINGS!!!”

‘What Evil Lurks’ marked the first official personal release by The Prodigy. It came out 30 years ago, in the late days of February in 1991 and the 12” Vinyl record sold around 7,000 copies. If you own a copy of the original ’91 version, you should keep it like gold.

The EP is comprised of four tracks. A1 is the self-titled and opener ‘What Evil Lurks’ where Liam draws on samples from his favourites Ultramagnetic MCs and the ska band, Madness. A breakbeat track with a simple bassline, and also setting up nicely the A2 slamming ‘We Gonna Rock’. This track samples LL Cool J, firing up with a strong bassline and a mad rushing result. Again, it’s a fruition of Liam Howlett’s hip hop roots with a transcendence to the next level of rave that is being showcased here in a truly magnificent aural assault. 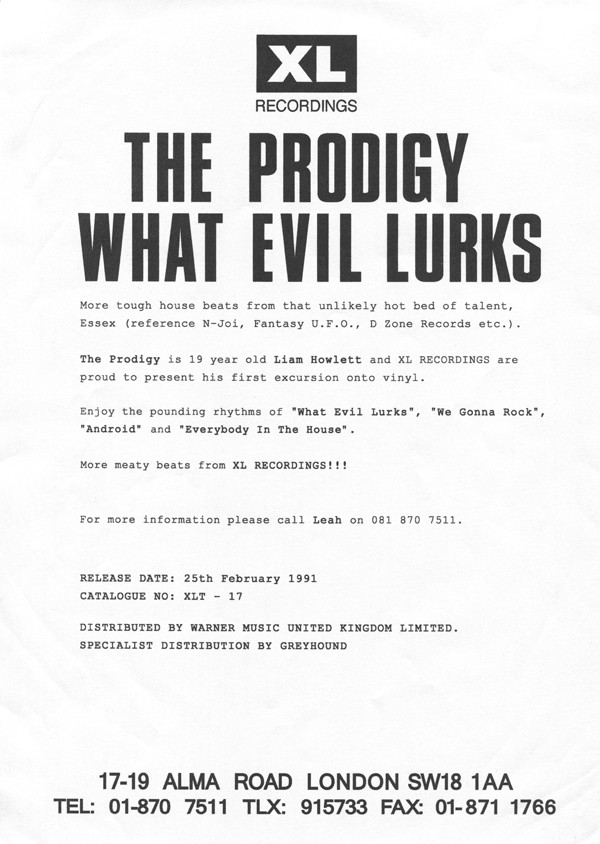 On the flipside of the record, ‘Android’, is by far the big hit of this EP. It’s an invigorating transition from house to breakbeat. ‘You know what time it is…’ It’s the time when this tune sends every raver a shiver down their spine with the opening melody and the astonishing bleeps. The oldskool crew still love this tune so much!

Closing with the slowest ever released version of ‘Everybody In The Place’; a prior original mix to the latter ‘Fairground’ and the ‘Experience’ versions. Not bad, but not like the ‘Fairground’ video version that is still going down a storm.

This year we celebrate the 30th anniversary of many iconic records. From Orbital’s self titled album to Massive Attack’s ‘Blue Lines’ or ‘White Room’ by The KLF to name but a few, and the list doesn’t seem to be ending.
Despite being an average record, we should not skip that ‘What Evil Lurks’ was the Prodigy’s debut strike to the world. It was the first step to their entrance into their illustrious career, now spanning a mind blowing 31-year career and longevity.
Their unique sound has influenced many genres of music over the years. It has been more than 2 years since Keith Flint’s loss and it’s vitally important that they haven’t thrown in the towel. The remaining force of Liam Howlett and Maxim is re-gaining energy for new tracks writing the next page of The Prodigy history, with golden letters.
Additionally, there is a documentary in progress about the band and many expectations for the new material. Time will tell…

Until then, happy 30th anniversary to the debut EP by the electronic punk dons and champions of London and the whole world. Long live The Prodigy!