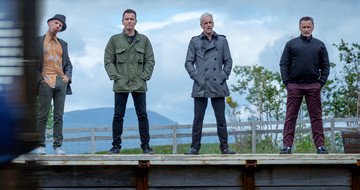 T2: Trainspotting 2 Trailer Their Back Together

T2: Trainspotting 2 Trailer Their Back Together

Booooom…Trainspotting sequel is out in January next year after Sony has shared the film’s first official trailer.

Reminiscent of a scene in the original movie, the clip shows Renton (Ewan McGregor), Spud (Ewen Bremner), Sick Boy (Jonny Lee Miller) and Begbie (Robert Carlyle) standing on a railway platform as a train drifts past them, soundtracked by Iggy Pop’s ‘Lust For Life’.

It’s the first footage we’ve seen from Danny Boyle’s upcoming flick and follows the teaser video that came out in May.

Trainspotting author Irvine Welsh spoke about the plot in March, saying the characters would be involved in the vice industry in Edinburgh.