With its superior build quality and exceptional sound, Roland carved itself a piece of synthesizer history with the Jupiter 8 or as its catalogue number states, the JP-8. If you’ve ever tried to carry a Jupiter 8, it’ll give you an indication that there is some serious internal circuitry going on inside this innovation of its time. 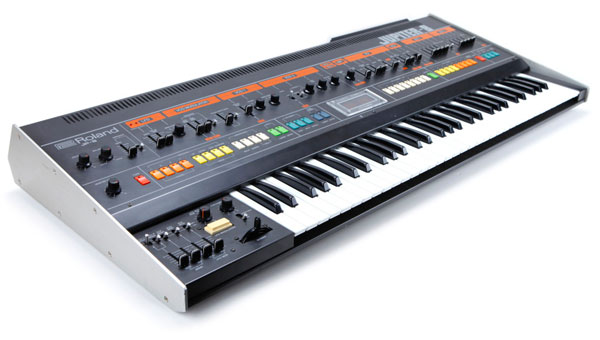 A thing of beauty

The first thing that grabs your attention when using the Jupiter 8, before touching it, before you’ve even switched it on, is the flawless design. Red, orange, yellow, green, blue, black and white. It was a rainbow of multi-coloured buttons and impeccable graphical design. It truly is a thing of beauty in every sense and it pretty much bombards all your senses.

A Front panel of switches and knobs and sliders.

One of the stands out features of the Jupiter 8 is its incredibly practical front panel.  Not only did it make the JP8 a thing of beauty, but it’s also exceptionally well designed, packed full of features many other synths only dreamed about. Across a huge façade, it boasts a series of knobs, sliders and switches that give the user a huge amount of control.

A flagship of the Roland product line, it was the favourite synthesizer of all time for keyboard legend Howard Jones who said about it “I’m still discovering new sounds, new things about it, even now. It’s so reliable. I’ve taken it everywhere. Trashed it all around the world, and it’s never gone wrong on me. It’s got lovely smooth sounds, and I also like it for lead work. Piling oscillators on top of each other.”

Another synth pioneer who claims it is his favourite synth is Harold Faltermeyer who talked about it fondly to the Red Bull Academy “The Jupiter 8’s particular sound comes from the structure of the two oscillators of each bank [in]each voice. So you can actually layer them. This makes for a very fat, good sound. The Jupiter 8 was my main instrument for melodies, all the Axel F melodies were made on it.”

It made its way onto some of the biggest pop records of the 80’s such as Michael Jacksons Thriller and Duran Duran’s Hungry Like a Wolf. 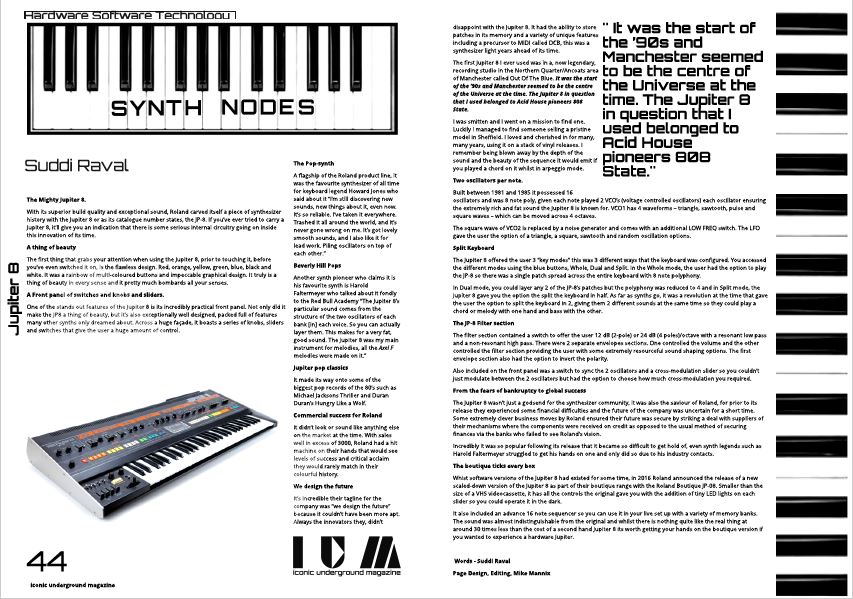 It didn’t look or sound like anything else on the market at the time. With sales well in excess of 3000, Roland had a hit machine on their hands that would see levels of success and critical acclaim they would rarely match in their colourful history.

We design the future

It’s incredible their tagline for the company was “we design the future” because it couldn’t have been more apt. Always the innovators they, didn’t disappoint with the Jupiter 8. It had the ability to store patches in its memory and a variety of unique features including a precursor to MIDI called DCB, this was a synthesizer light years ahead of its time.

The first Jupiter 8 I ever used was in a, now legendary, recording studio in the Northern Quarter/Ancoats area of Manchester called Out Of The Blue. It was the start of the ’90s and Manchester seemed to be the centre of the Universe at the time. The Jupiter 8 in question that used belonged to Acid House pioneers 808 State. I was smitten and I went on a mission to find one. Luckily I managed to find someone selling a pristine model in Sheffield. I loved and cherished in for many, many years, using it on a stack of vinyl releases. I remember being blown away by the depth of the sound and the beauty of the sequence it would emit if you played a chord on it whilst in arpeggio mode.

Built between 1981 and 1985 it possessed 16 oscillators and was 8 note poly, given each note played 2 VCO’s (voltage controlled oscillators) each oscillator ensuring the extremely rich and fat sound the Jupiter 8 is known for. VCO1 has 4 waveforms – triangle, sawtooth, pulse and square waves – which can be moved across 4 octaves. The square wave of VCO2 is replaced by a noise generator and comes with an additional LOW FREQ switch. The LFO gave the user the option of a triangle, a square, sawtooth and random oscillation options.

It was the start of the ’90s and Manchester seemed to be the centre of the Universe at the time. The Jupiter 8 in question that used belonged to Acid House pioneers 808 State

The Jupiter 8 offered the user 3 “key modes” this was 3 different ways that the keyboard was configured. You accessed the different modes using the blue buttons, Whole, Dual and Split. In the Whole mode, the user had the option to play the JP-8 so there was a single patch spread across the entire keyboard with 8 note polyphony. In Dual mode, you could layer any 2 of the JP-8’s patches but the polyphony was reduced to 4 and in Split mode, the Jupiter 8 gave you the option the split the keyboard in half. As far as synths go, it was a revolution at the time that gave the user the option to split the keyboard in 2, giving them 2 different sounds at the same time so they could play a chord or melody with one hand and bass with the other.

The filter section contained a switch to offer the user 12 dB (2-pole) or 24 dB (4 poles)/octave with a resonant low pass and a non-resonant high pass. There were 2 separate envelopes sections. One controlled the volume and the other controlled the filter section providing the user with some extremely resourceful sound shaping options. The first envelope section also had the option to invert the polarity.

From the fears of bankruptcy to global success

The Jupiter 8 wasn’t just a godsend for the synthesizer community, it was also the saviour of Roland, for prior to its release they experienced some financial difficulties and the future of the company was uncertain for a short time. Some extremely clever business moves by Roland ensured their future was secure by striking a deal with suppliers of their mechanisms where the components were received on credit as opposed to the usual method of securing finances via the banks who failed to see Roland’s vision.

Incredibly it was so popular following its release that it became so difficult to get hold of, even synth legends such as Harold Faltermeyer struggled to get his hands on only one due to his industry contacts.

The boutique ticks every box

Whist software versions of the Jupiter 8 had existed for some time, in 2016 Roland announced the release of a new scaled-down version of the Jupiter 8 as part of their boutique range with the Roland Boutique JP-08. Smaller than the size of a VHS videocassette, it has all the controls the original gave you with the addition of tiny LED lights on each slider so you could operate it in the dark. It also included an advance 16 note sequencer so you can use it in your live set up with a variety of memory banks. The sound was almost indistinguishable from the original and whilst there is nothing quite like the real thing at around 30 times less than the cost of a second hand Jupiter 8 its worth getting your hands on the boutique version if you wanted to experience a hardware Jupiter.