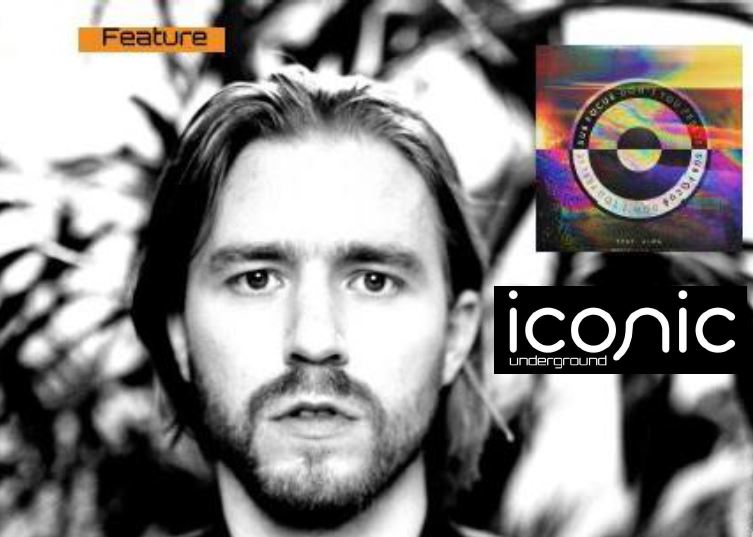 Mike Mannix: Nice one Nick aka Sub Focus thank you for talking to us at iconic underground. Give some background on your early itinerant influences socially and musically how did you get into dance music, what gave you the itch to mix and eventually to produce your own produce your own tracks?

Sub Focus: I started off in music by forming a band at school with friends when we were about 12 years old. I got really into Rock / Grunge music in the early 90’s, listening to bands like

Nirvana and we basically decided we wanted to start a band before we knew how to play any instruments.

I was never a talented instrument player back then which lead me into producing music on computers rather than recording myself play. My initial setup was my mum’s Acorn computer and I started making rudimentary dance music by arranging samples via classical notation, a pretty bizarre technique to say the least. Then I started hearing early Prodigy and Chemical Brothers, and their Rock influences pulled me into dance and electronic music. Through that, I came across Jungle music and was obsessed with that from then onwards.

MM: Walk us through the usual process of when you are in the studio creating your new tracks from the analogue outboard, midi, samples and DAW you use and why. What is key in the whole production process and how do you use an effect as the main hook of a tune?

SB: Tracks get started in loads of different ways but normally I get inspired by listening to lots of music on the internet and finding parts I might want to emulate, or I might track down an old sample and use that as a starting point. I spend a lot of time on sites like Discogs buying the originals of old acapella or samples from the 70’s and 80’s.

Since I moved to my current studio a couple of years back I’ve been building up the hardware side of my studio, I’ve moved from a totally computer-based way of working to more of a hybrid now. Often I will make sounds and sequences on my modular setup and record live passes of that to use in my tracks. I’m always experimenting with different kit these days, I even bought a cassette walkman recently to try running sounds through.

All of the recordings I make I then assemble into tracks in Ableton Live on a MacBook Pro, which means I can leave the studio and continue working on stuff when I’m away on the road.

The key is feeling really excited by a track – I only release stuff that I get this feeling about,

lots of stuff gets left on the cutting room floor.

Sometimes I will try and use unusual sounds like sound effects or snatches of vocal for a hook, I got inspired to do this listening to lots of house and techno where sometimes the weirdest sounds can be the catchy and memorable element of a song.

MM: Tell us about the last ever night of Metalheadz Sessions at the Blue Note in Hoxton and how it influenced you?

SB: So when I was about 16 years old I managed to go to one of the most seminal DnB nights of all time almost by accident. I turned up really early and just happened to get in. It had a massive effect on me and I remember hearing some all-time classic DnB records like Adam – Brand New Funk and Ed Rush & Optical – Alien Girl for the first time there.

MM: You signed up to quite a technical sound engineering course at college, tell us about the how physics of sound captivated you?

SB: I love the science of music and I think about sound in quite a technical way. When you listen to a satisfying melody I believe you are subconsciously appreciating the maths of the relationships between the notes. If you make and engineer your own tracks to work in clubs, as I do, you aren’t just thinking about the melodies and the instrumentation but the power of the sounds over time. Electronic music and particularly

MM: How important was and is the combination of DJ, sound system and lights?

SB: The combination is hugely important. I really wanted to start having more control over the overall look of my shows which is why I started doing my live shows. Being strong visually or being in a unique place adds so much more to a show. I love festivals and events where lots of attention is paid to how they look or they are in an amazing outdoor location – Secret Garden Party in the Uk for example, Belvoir Amphitheatre in Perth, Red Rocks in Denver.

MM: How pivotal a moment was it after playing your debut track in Fabric 2003 Andy C signed you to RAM Records, tell us about that?

SB: It was a huge moment in my career, the start of it really. A friend of mine, Jack, was playing before Andy at a night in Reading. Jack asked for some dubs of mine to play himself so he had some ammo to draw on the DJs after him. He passed Andy the CD after the set without telling me and I had a call from him a week later. Apparently, he had written my number on the CD so roughly that Andy had to dial a few different variations of it before he got through to me. Andy was playing at Fabric that night so I went to see him play the tunes there and we started a working relationship from then onwards.

SB: In terms of DnB, I think Dimension and Camo and Krooked are writing some of the most exciting forward thing music at the moment, I’m also really enjoying the emerging half-time scene that guys like Ivy Lab and Alix Perez have been spearheading.

I’ve been working with a few of my all-time favourite DnB producers lately, it’s amazing to be in a position now where my heroes from when I was a kid are now up for getting in the studio together.

MM: Back in the day DJs and producers really had to put in some seriously long hours, dedication, patience and money to learning the beautiful art and skills of mixing vinyl and producing original tracks.  Now with the advent of sync buttons, constructions kits and templates are today’s electronic DJ’s / Producers at a disadvantage or advantage?

SB: I don’t believe in looking back with too much nostalgia. There are certain things I miss about the days of vinyl DJing but many things that are way better now. I miss the pre-internet mystique of not knowing what a track was called for months / not knowing much about the characters that made it and how the music was made.

However you are able to do way more interesting things as a DJ now using digital files – looping/fx / creating bespoke edits and more, it’s opened up so many more possibilities. Sync and accurate BPM readers have meant that

and the focus is now on track selection and mixing style.

New DJ’s and producers have a huge advantage compared to producers of old in terms of availability of software and music kit, however, that also has to lead to a more saturated and busy market so it’s harder to stand out, and the general quality of music producers output is higher.

SB: I think that it’s increasingly important to be aware of visually how you are presenting your music. It’s obvious that you also need to strive for a unique style in your sound but having good design and visual ideas too helps a lot for you to stand out and helps to explain where you are coming from musically and culturally.

MM: Is there an underground anymore?

SB: Yes, there is 100% a healthy underground in most genres of electronic music right now.

for a long time, trends in commercial music tend to come and go.

MM: If you ended up trapped on a godforsaken island with only your decks,  a crate of spirits and your vinyl fly case to your name, what would be the top 10 essential cuts that you must have to survive and why?

SB: I would probably bring a crate of my favourite albums, this changes from day to day though.

SB: Something that drives me most is imagining where I’m going to play the music I’m making. So if I play at Fabric it inspires me to write club music, or a big festival something anthemic. I wrote the title track of my last album Torus as an intro for my live show that I launched in 2012. I wanted to start the show off at a slow tempo and build from there.

MM: Love or hate it EDM what are your thoughts?

SB: EDM is just the American word for all dance music, but over here in the UK people use the term to refer to the particular styles of electronics that people are making over there. I’m not a fan of some of the clichés of the genre but there is some incredible talent in the US pushing dance music into new forms over there.

SB: Nothing really pisses me off about the scene, most of the musicians I meet and interact with are interesting and inspiring people.

sometimes, there’s a lot of admin / social media and travel that you have to do as a DJ that takes valuable time away from being in the studio.

SB: Closing the Glade Stage at Glastonbury back in 2010 has got to be one of my favourites all time shows, playing in a forest in the middle of probably the best festival in the world can’t be beaten. Also headlining Brixton Academy with my live show was a huge career milestone.

MM: What are Sub Focus’s next big planned events and projects?

SB: I’ve just released Don’t You Feel It featuring ALMA, I’m working on some collabs and a larger body of music at the moment. I’m also going to hitting a bunch of festivals over the summer including Reading & Leeds and SW4 with the new version of my live show.