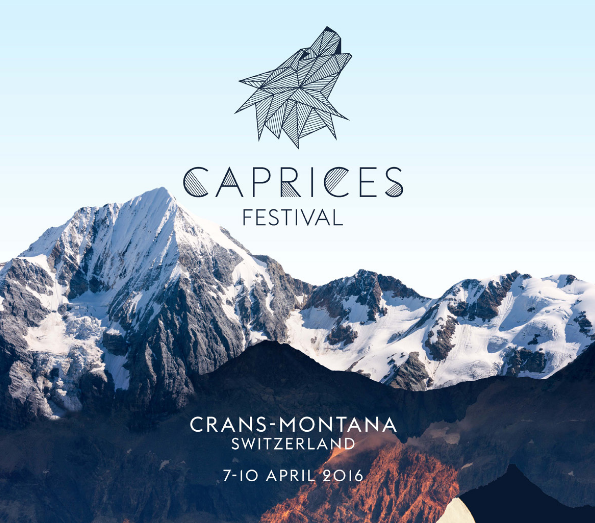 I’ve never been to a festival in the mountains before, so when the opportunity arose to go to Crans-Montana in Switzerland to interview Martin aka ‘Stimming’, at the Caprices festival representing iconic underground magazine, I literally jumped at it!

To reach the sick line-up, I had to take the ski lift to get up the demanding 2000 metres above sea level slope in the Alps, I wasn’t disappointed, by either the performances, the sound-system or the fantastic scenery, as I sat over a bottle of champagne with Martin, the beats were pumping and reverberating, now the time was as good as any to talk…..

S: Well the setting is of course amazing! And what’s added to this, I did my album in a cottage, up in the mountains at a very similar height, almost half a year ago.

M: So you were just alone in the mountains in a cottage

S: There I was one month, alone, in the Alps and recorded my album.

S: What I always find epic is playing on ships. Ha I did that a few times already. So one time in Brisbane, Australia, on a ship. Actually it was during an alcohol free ‘holiday’.

S: Haha, they have a ‘thing’ going there with alcohol… an alcohol free day thing there. So then

M: Yeah you can also not smoke nowhere there.

S: Haha, But on the ship you could, so there was this raving party community there, all like “EHHH!!” And on the riverside, you had everywhere these good families

S: Well I think Hamburg has a very special flair. I guess every big city says that (laughs), but Hamburg has that as well..

And that is, how shall I say, still placid for a big city… but majestic and a bit witty. So one try’s to observe the proprieties [as in: for appearance sake] and that’s what my music is about too.

S: Ya well over 16 years ago… actually it started with drum and bass, down beat DnB, schranz, and then house

S: I hope I’m just about making good music
M: Haha that should be enough actually

S: actually that should be enough..

S: Hmm, I think my personal favourite from my tracks, even though this is always tough, is ‘Die kleine Nachtmusik’. The title is actually from Mozart, but the track is much more beautiful than Mozart (hohoo) its about.. 8-9 years old, maybe 7 years..it came out on Buzzin’ Fly

7. Which do you like more, Producing or Playing Live?

S: Hm, I dig both. Playing live is a bigger challenge, because you have much less time. You have very tight time windows and need to make compromises constantly, make decisions, which can go wrong too. That is the exciting thing about playing live.

M: How much do you improvise when playing live?

S: Nowadays pretty much, because I play without the laptop, it’s hardware devices, not analogue

S: Amon Tobin, I think he is just wicked.

S: Cubase. I have a pencil display for this. I don’t have a normal display and mouse and keyboard anymore, but I do in Cubase everything with a pencil now. I ‘touch’ Cubase with a pencil.

M: It’s similar to an iPad or something?

S: Yeah it’s similar to on an iPad actually. This vacuum technology exists for graphic designers for decades. You draw with the pencil and then it’s as precise as with a mouse. They put this technology onto a display. So I have the display in front of me like a piece of paper, but it is a Cubase 😉

M: And everything bought yourself..

S: Yes, everything bought myself, own room and not at home. Even though I bring the studio home now too, but in a smaller configuration.
M: It’s the best?

S: Nope, it’s just a normal room. In my rented apartment in Hamburg. The distance to the studio is like 8 km, it’s pretty big, like 35 sq. m, and I have pretty big speakers too, which of course I can’t take home. The neighbours would be like “äääh, no. No Dude, not like this Mr. Stimming..!” [in hamburg dialect].

11. You are using a lot of different devices. What is your favourite piece of outboard audio equipment?

S: Uh that’s tough, I like all the elektron devices pretty much the same

M: Why, what’s the big deal about them?

S: Well they kinda emit [radiate/symbolize?] techno. They have one standard form factor. They are rather heavy, solid, properly constructed. Somehow… Very sexy

S: Today they are both equal in my opinion

S: No that’s bullshit. Synthesizer tones don’t sound organic in general, doesn’t matter if it’s analogue or digital. It’s simply not a chord you are playing, which is always a bit different. But a synthesizer is always the same basically. And that’s also boring. So you gotta ‘tell’ a synt somehow he has to ‘change’. And there is the analogue approach to make a simple device, of course to make the tone slightly more forceful, a bit livelier, but in the end it’s still a stark [stiff/rigid] tone. And digital synths have the problem that they are always so overloaded with features, that you can in fact, theoretically, with 15 LFOs, adjust the sound in any (what do I know) way, but nobody can operate this. There is no human who can think this through.

S: I can imagine that the market itself gets bigger, damn how I hate this word, market.. And that this will be, like an organism, be stronger in some field and weaker in another, there will be different currents [as in influences].. Currently it’s getting a bit harder again. And then this Hmm weird American EDM, is actually pop music…  EDM, I don’t know, this could be the next bubble… That in 5 years the people will say “hää? What was that? Did they really listen to this back then with children’s melodies* and now boooa the baddest beat you can ever imagine, again children melody, and lazer *LIGHTSHOW* and so……the underground is not about *bling bling* and *zisch* *bumm* noise, but rather about.. dancing, and dancing for yourself, thats cool…

S: In fact, the sad thing about it is, that this euphoria gets lost a bit.. We humans are creatures of habit. As soon as you do something a hundred times, it’s not exciting anymore, even though it is actually exciting. And that’s really a bit of a pity that it gets lost. But apart from that, I cannot imagine anything better..

M: Yes, but I mean you.. Okay of course, at some point you yourself have heard all the tracks and you just said, yeah you lose a bit of the euphoria.. but still what does it mean to you, to give other people who haven’t heard it so often and maybe don’t go to party all the time, such a joy and a good evening…

S: I think I can’t imagine anything better… (Smiles as a full bottle of champagne arrives)

M: Another thing, you notice in this scene, is that there are a lot of people who are involved only because they think it’s cool, being an artist, being successful, the parties, how do you stay grounded?

S: Hm… I guess to do it this long, or I mean to do it good, the trappings don’t matter at all, so that means, you can actually refrain from that side of things…  and only focus on the content..

“That’s why you don’t have time to be ‘cool’ or so. I try to do something special and that’s relatively hard. When I notice I start to get bored, I make it more complicated. That grounds you again and again. And I’m nowhere near as convinced of myself as people who like my music, think that I am convinced. “

M: Yeah as an artist you are always your own biggest critic.

S: And seen from that angle, I can refrain from it, but maybe others can’t refrain, maybe they don’t have anything else…

M: Yeah but you recognize that pretty fast usually

S: Yes you do recognize it pretty fast…

15.Now a bit off question.. If you could interview anyone for half an hour – an hour, dead or alive, who would it be?

M: again.. Yeah it seems he really impressed you?

S: Yeah well if I don’t know anymore, then Amon Tobin.. Really, you gotta listen to him. You actually barely understand what he does.. But it is so.. it’s on a level that no one else does… Most likely maybe some really wicked sound designers who make music for badass movies.. If they would use that material to make music out of this. So some sort of structure… And that’s kind of what he is doing. It’s pretty intense.

S: Yeah exactly my album comes out on the 29th of April on vinyl, CD, MP3, with download codes, and stems

S: Well you have the track in 4 different trails (sub tracks?!) for all tracks

S: … And I got a track on the new Pampa compilation. That’s my two things now. Apart from that I have to tour a lot and that’s it.

S: Well that’s really hard to say, everyone has to find out for themselves. It’s actually part of the journey… Maybe most likely not to be afraid to make mistakes, finish tracks. And besides, don’t accept advice! If I look back now, I wouldn’t… Well I would make sure to not screw anyone, and not get screwed either.. Apart from that.. Make mistakes and you will find out..

M: Are you coaching people currently, or do you have people who are with your label who you help?

S: no actually not, but recently I have a tour manager. Therefore I’m not on the road alone. And he is also a producer, Jonas Mantey.

Beat the Cheats – Self Promote