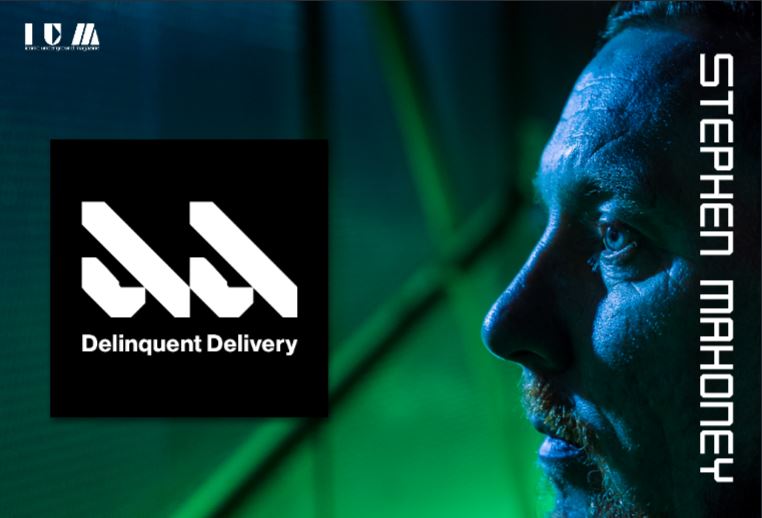 Hailing from Dublin is a fine curator and purveyor of Techno Stephen Mahoney, an artist on the rise that we really respect, we sat down with him over a few pints and chewed the phat..

Mike Mannix: Stephen Mahoney of Delinquent Delivery great to have a chat over a few pints, so what was the spark for you back in the day? Your inspirations and background?

SP: I don’t know, I always loved music, I don’t come from a very musical family at all actually, and I just grew up listening normal stuff from the ’80s with MTV and Top of the Pops and things like that. And one day on the Top the Pop, The Prodigy Charly came up and it just blew my mind, and as soon as it was finished I wanted to listen to it again. So that was the beginning, and then, later on, I was always listening to the many pirate radio stations we had in Dublin like Sunset, Club FM and Power FM, they were great stations, 24/7. And hearing all the advertisements about Sides Tin Pan Alley and the Asylum but I was too young to go you know but I was dying to go you know what I mean but it wouldn’t be till  I was 17, that was the Kitchen and it blew my mind.

And then on Fridays we would be there for Jay D B night, and Françoise, a resident there at the time and he blew my mind, he used to play the B sides of records so nobody knew what he was playing, but he was just a craft it in such a way, but like I just kept going there, and over the course of the year I would see Surgeon, Sasha, and the list went on.

And this went on, so I started to go clubbing and then like bigger events for my 18th birthday like Eurodance and around the same time I was starting to go to the Kitchen and saw Dave Clark and also this guy from Belfast can’t remember his name but anyway he played the Bells from Jeff Mills and it was the first time I heard that in my life and I thought “why every record can’t be like this?”

Then I start studying in the Sound Training Centre and people were into more rock and metal bands back then, and it kind of put me off a bit but I just kept on collecting records and spending my wages. I would spend most of my time searching for new things, in the likes of Tag records. I was addicted you know to crate-digging and then I started getting gigs and at the time it wasn’t like on a Friday or Saturday night thing, anytime you had a day off on the next day, no matter what day of the week I’d play.

he played the Bells from Jeff Mills and it was the first time I heard that in my life and I thought “why every record can’t be like this?”

It was exciting with the after-parties and all and then, I was kinda partying a little bit too much at that point, I had the opportunity to go to Australia so I just went there which calmed me down for a year. But the addiction for records was still there, going to shops in Melbourne, buying records, I didn’t stop, you know what I mean. Then I came back and the landscape had changed, the bars could be open later and the clubs could go later, a lot of people were starting to listen to electronic music just very different than let’s say Homelands or Cream fields. The Red Box (POD) was finished as well so it was a tricky landscape to come back to!

Also smaller collectives started to show up, a new crew kinda formed again, maybe we weren’t going out every day of the week but on the weekends for sure and I was still collecting records but I wasn’t really doing anything at that point. I felt a bit dissatisfied with Dublin and wanted to travel, so with one of my mates we hit the road again. Another year or two goes and then I came back, and it’s was tough mental health-wise so I kinda got myself together through music again. Also, I was studying visual art at the time and I wanted a visual art component into making music. Then I bought Ableton to mess around and really started to be dedicated to it, just to see what I could do.

The visual art angle really helped because I was still doing sound isolation in college and doing photography, video, and matching it with the tracks I was making. Then I finished my degree got a bit of backing from my family for money and I just started producing at the same level I was doing with the art. And over the course of the years, I had some great releases, my first release ‘Coincidence’ Ben Sims picked it up and he is like my all-time hero of mine so to have that happen was just a huge thing and to hear it on this radio show I just felt really proud you know. So it is like that now, doing my solo stuff and I also started flesher with Jamie and got a good few tours on the go in Ireland then we played in Tresor! I played solo in Croatia in a club called Epic and that was such a giving crowd and would go back in a heartbeat. 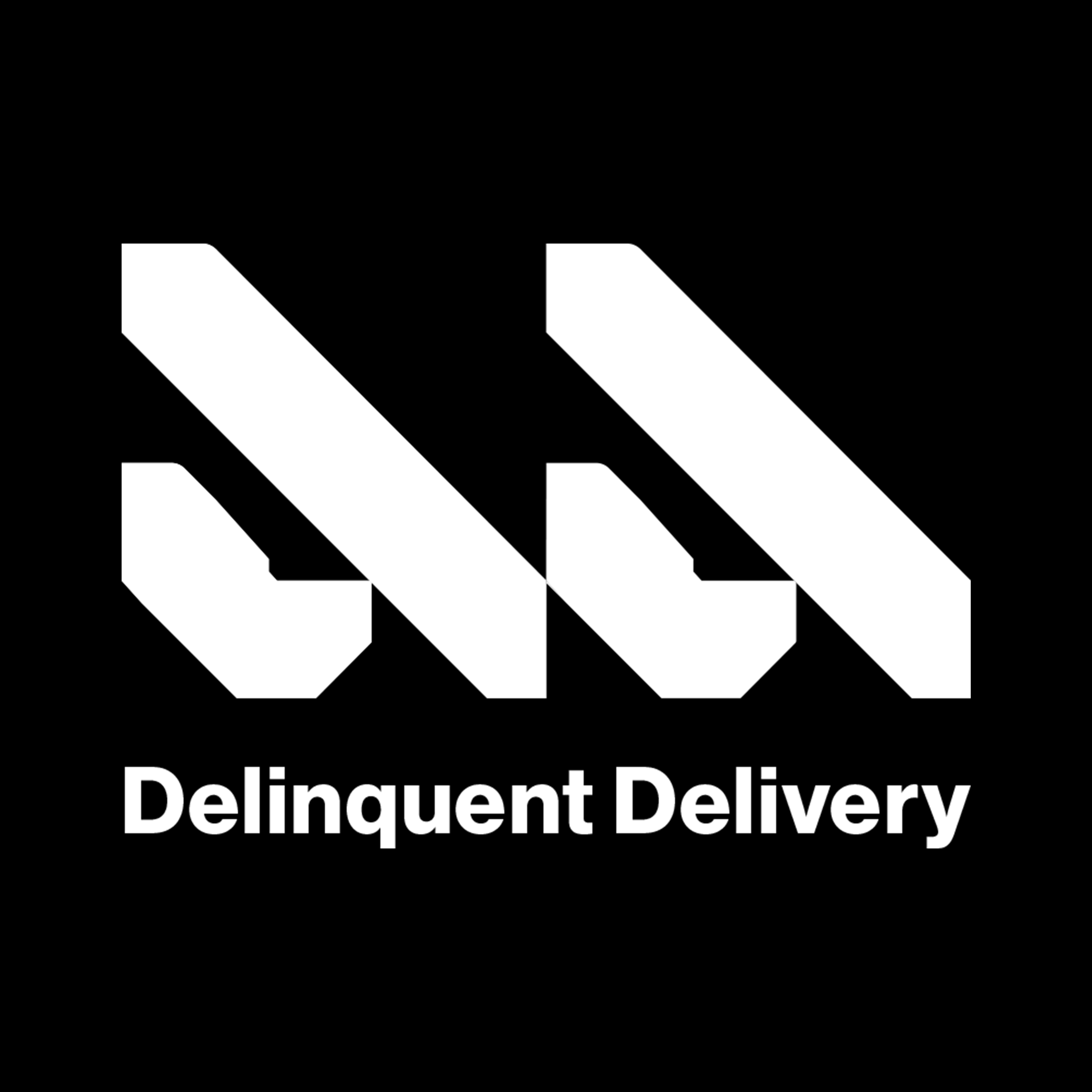 MM: When did the idea drop to set up a label?

SM: Well after the Coincidence Record I just mentioned, I was talking to Al from  Vision Collector and we were having some pints in Berlin bar and we were chatting at the back and I was just like I want to put this record out there and they told me why I didn’t do it myself, and it put me on the path.

And the first release we did with Readymade was Volster and that record did very well for me and I took a risk with Lars Husiman, that I met in Berlin a year before at a Lobster Theramin Night in the Prince Charles, an amazing little club, I think it’s gone now. The DJ faces the sound system so you didn’t know where to look with the bar going around it was in an old swimming pool, just very nice. So we got on and asked him for an EP, did my own afterward with Lee Homan on remix duty. I started to get a lot of demos, one of them was from Mary Velo which I have huge respect for and I have a good few of her records. which is the thing is my label, nearly everyone that signed up in my label is already on the records and that’s not like a statement, it’s just how it worked out.

When I got Ben Gibson on board to do the B side, myself and Jamie Behan were all over him thinking that that’s gonna be the one that would soar, and to this day it is the best release I’ve had. After that Flexure with Jamie Behan, we had previously released on his label Bastardo Electrico which is a fantastic label, I was so delighted to be on his label, so I decided to cut the follow-up. It was at this time Shelter Records in New York City took issue with the name and I had to change the Name to Delinquent Delivery, which in its own time took off again. To be honest, I look at this as a new label, so in three years I have had two successful labels. So far on Delinquent Delivery I’ve hosted Lockertmatik and Nathan Jones had two solo records which is a two-part EP, one was released last September and the next one is out January 20th, 2020. The next release is a VA coming out later in the year and features a host of Irish talent I love and respect. 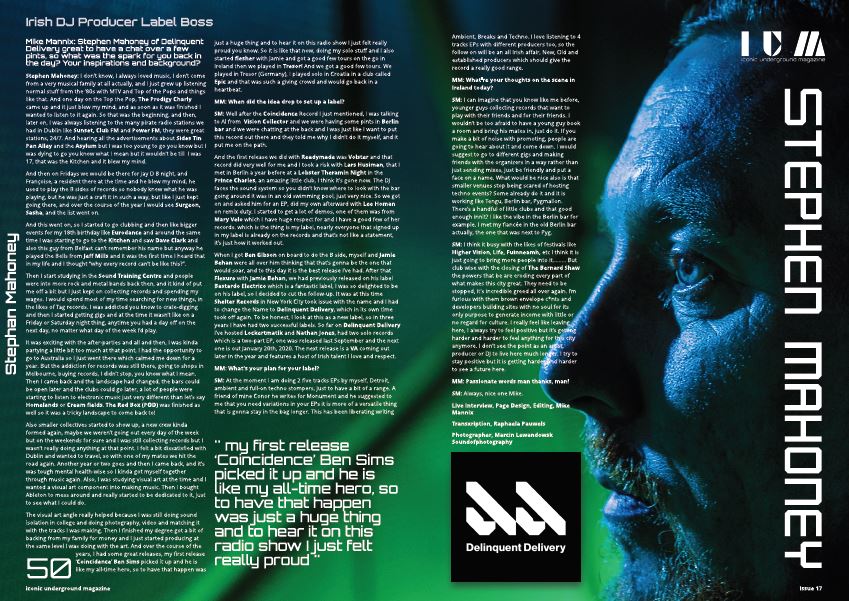 MM: What’s your plan for your label?

SM: At the moment I am doing 2 five tracks EPs by myself, Detroit, ambient, and full-on techno stompers, just to have a bit of a range. A friend of mine Conor he writes for Monument and he suggested to me that you need variations in your EPs it is more of a versatile thing that is gonna stay in the bag longer. This has been liberating writing Ambient, Breaks, and Techno. I love listening to 4 tracks EPs with different producers too, so the follow on will be an all Irish affair, New, Old, and established producers which should give the record a really good range.

MM: What’re your thoughts on the scene in Ireland today?

SM: I can imagine that you know like me before, younger guys collecting records that want to play with their friends and for their friends. I wouldn’t be too afraid to have a young guy book a room and bring his mates in, just do it. If you make a bit of noise with promoting, people are going to hear about it and come down. I would suggest to go to different gigs and making friends with the organizers in a way rather than just sending mixes, just be friendly and put a face on a name. What would be nice also is that smaller venues stop being scared of hosting techno events? Some already do it and it is working like Tengu, Berlin bar, Pygmalion. There’s a handful of little clubs and that good enough innit? I like the vibe in the Berlin bar for example. I met my fiancée in the old Berlin bar actually, the one that was next to Pyg.

SM: I think it busy with the likes of festivals like Higher Vision, Life, Fuinneamh, etc I think it is just going to bring more people into it……… But club wise with the closing of The Bernard Shaw the powers that be are eroding every part of what makes this city great. They need to be stopped, it’s incredible greed all over again. I’m furious with them brown envelope c*nts and developers building sites with no soul for its only purpose to generate income with little or no regard for culture. I really feel like leaving here, I always try to feel positive but it’s getting harder and harder to feel anything for this city anymore. I don’t see the point as an artist, producer or DJ to live here much longer. I try to stay positive but it is getting harder and harder to see a future here.