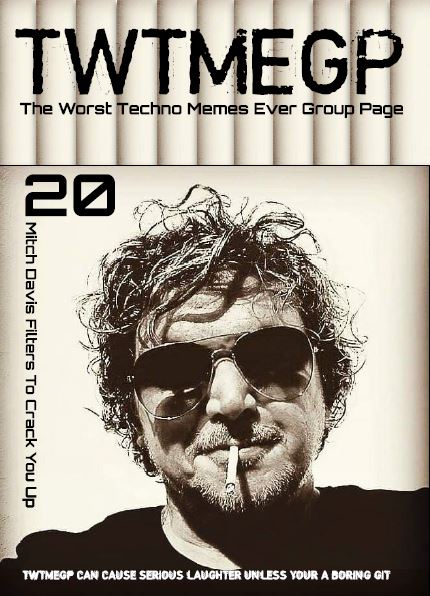 We got to have a natter with one of the administrators on the worlds biggest Techno satire online page TWTMEGP and his life in dance music.

Mike Mannix: Nice one geezer good to finally have a natter. So before we hit on TWTMEGP what was the young Mitch doing? What were your influences, your interests, and how did your natural piss-taking ability develop?

Mitch Davis: It’s that usual story. In 1987/88, I left school and went straight into the whole Acid House thing and was lucky enough to be getting into Shroom, Spectrum, Trip, Sin. I lived 20 miles north of London on a little council estate and we just walked into the whole scene because we already had the love for all the electronic stuff in the charts and whatnot, and needed to go and listen to this in the right environment ya know.

We began going to Soul weekenders, watching Nicky Holloway, Paul Oakenfold, Pete Tong they were doing smaller sorta gigs in them days. Then it was Spectrum on a Monday Shoom on a Wednesday, and madness at the weekends, what a trip you know, that massive House thing just blew up and I’ve been just absolutely obsessed with it ever since just lived and breathed that whole culture really.

I left school and went straight into the whole Acid House thing and was lucky enough to be getting into Shroom, Spectrum, Trip, Sin

Then this strange phenomenon started with social media, like watching my favorite DJs arguing with each other about where Dance music started in the UK whether it was in Manchester, London and all that, with all these 55-year-old blokes arguing like teenagers, about who played such and such first you know what I mean. I was always a natural piss taker and this just took off with music. My dad’s a piss-taker, and my brother, obviously just something in the genes.

MM: So the whole phenomenon about TWTMEGP (The Worst Techno Memes Ever Group Page), give us a bit of background about it. Did you expect this popularity?

MD: That was started by Allen Aubrey and Leigh Dickson  about 3 years ago. and it was just them sending really contrived cheesy Techno to each other taking the piss by saying ‘love Techno’ etc. Then I started posting on it about 2 years ago, I was quite prolific, and I was also doing stuff for Ransom Note magazine. They put on events based in East London and I was doing something called ‘Asking for a friend’ where I was asking inappropriate questions, which I have on my Facebook as well, and that took off, I got 100 weeks worth of those, and I got archives.

Before that, I was doing serious music reviews in my own a digital magazine, similar to yours actually, called Numb Magazine, I was gonna have a comedic angle in there as well because you can’t compete with and Resident Advisor but with a different blend of online bullshit from me. When I first joined TWTMEGP it was like 1000/2000 members and now it’s 150.000… 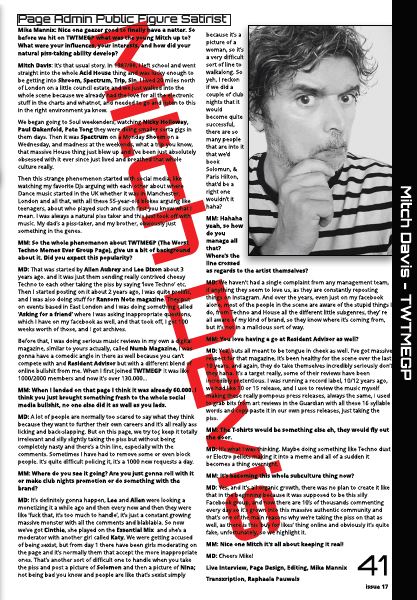 MM: When I landed on that page I think it was already 60.000. I think you just brought something fresh to the whole social media bullshit, no one else did it as well as you lads.

MD: A lot of people are normally too scared to say what they think because they want to further their own careers and it’s all really ass licking and back-slapping. But on this page, we try toç keep it totally irrelevant and silly slightly taking the piss but without being completely nasty and there’s a thin line, especially with the comments. Sometimes I have had to remove some or even block people. It’s quite difficult policing it, it’s a 1000 new requests a day.

MM: Where do you see it going? Are you just gonna roll with it or make club nights promotion or do something with the brand?

MD: It’s definitely gonna happen, Lee and Allen were looking a monetizing it a while ago and then every now and then they were like ‘fuck that, it’s too much to handle’, it’s just a constant growing massive monster with all the comments and blablabla. So now we’ve got Cinthie, she started Essential Mix on Fridays she’s a moderator with another girl called Kaity. We were getting accused of being sexist, but from day 1 there have been girls moderating on the page and it’s normally them that accept the more inappropriate ones. That’s another sort of difficult one to handle when you take the piss and post a picture of Solomon and then a picture of Nina; not being bad you know and people are like that’s sexist simply because it’s a picture of a woman, so it’s a very difficult sort of line to walkalong. So yeh, I reckon if we did a couple of club nights that it would become quite successful, there are so many people that are into it that we’d book Solomun, & Paris Hilton, that’d be a right one wouldn’t it haha?

MM: Hahaha yeah, so how do you manage all that? Where’s the line crossed as regards to the artist?

MD: We haven’t had a single complaint from any management team, if anything they seem to love us, as they are constantly reposting things on Instagram. And over the years, even just on my Facebook alone, most of the people in the scene are aware of the stupid things I do, from Techno and House all the different little subgenres, they’ re all aware of my kind of brand, so they know where it’s coming from, but it’s not in a malicious sort of way.

MM: You love having a go at Resident Advisor as well?

MD: Yea, buts all meant to be tongue in cheek as well. I’ve got massive respect for that magazine, it’s been healthy for the scene over the last 10 years, and again, they do take themselves incredibly seriously don’t they haha. It’s a target really, some of their reviews have been incredibly pretentious. I was running a record label, 10/12 years ago, we had like 10 or 15 release, and I use to review the music myself making these really pompous press releases, always the same, I used to grab bits from art reviews in the Guardian with all these 16 syllable words and copy-paste it in our own press releases, just taking the piss.

MM: The T-shirts would be something else eh, they would fly out the door.

MD: It’s what I was thinking. Maybe doing something like Techno dust or Electro pellets making it into a meme and all of a sudden it becomes a thing overnight.

MD: Yes, and it’s all organic growth, there was no plan to create it like that in the beginning because it was supposed to be this silly Facebook group, and now there are 10’s of thousands commenting every day so it’s grown into this massive authentic community and that’s one of the main reasons why we’re taking the piss on that as well, as there is this ‘buy for likes’ thing online and obviously it’s quite fake, unfortunately, so we highlight it.

MM: Nice one Mitch it’s all about keeping it real!