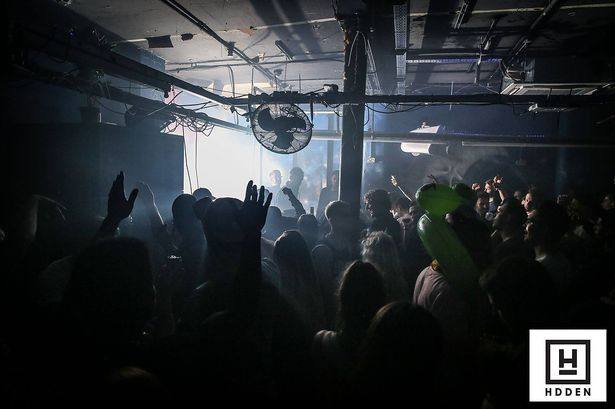 MayDay is a Manchester based music event company that is a force to be reckoned with! It has hailed such impactful events as MayDay x Projects skatepark event (headlining Mall Grab) and MayDay x Dimensions event at Antwerp Mansion (headlining Daniel Avery), the event and the people it have touched recognition with Manchester’s diverse crowd and music promoters.

The next instalment of their rave diary is set to be their biggest one yet, in partnership with the undisputable powerhouse label R AND S records. Headlining will be Talaboman (John Talabot and Axel Boman), Paula Temple, Space Dimension Controller and MayDay sound system.

We entered Hidden’s glowing psychedelic doorway into an atmosphere of immense enthusiasm to the sound of melodic sound that possessed the crowd into an uncontrollable frenzy of dance. People from all walks of life, the 50 something raver with the bucket hat forming indescribable shapes with his hands to the 20 something music geek with the Talaboman graphic tee who took a more laid-back approach to dancing.

This sound that gathered a busy crowd in the corner of Hidden’s blue room was the experimental bleeps and bounces of the headlining duo. Releasing their album ‘The Night Land’ on R and S records this year, they took a lot of charm and international flavour from their album into their performance. I found their performance compelling and breath-taking, every track they played stirred a different emotion.

Downstairs in The Den, the aftermaths of Space Dimension Controllers set caused an intergalactic stir in the audience. Renaat Vandepapeliere, one of the shock headliners of the night, is the reason why I am writing this review on the R and S night.

Without Renaat (one of the founders of R and S), we would not be introduced to ground-breaking music that gave recognition to DJ’s as Joey Beltram, Model 500 and C.J Bolland. He gave a performance of fun and collectiveness, involving the audience as much as he can as he is the type of music mogul who doesn’t take himself too seriously. Famously repeating the phrase ‘I am not a DJ’, he spoke about this at AVA conference that I attended earlier this year and on his tee whilst playing at Hidden.

The upbeat and variable techno was for the audience’s enjoyment, not to showcase his immense skills in mixing tracks with ease. We can surely say we are all grateful for his appearance on such a special night.

The final (and my most anticipated) performance of the night was the northern empress of heavy and indestructible techno Paula Temple. From the get go of her set the forceful kickdrums pushed through the speakers and engulfed the room, myself and the crowd were taken a gasp as we screamed with exhilaration.

Being the first female to be released on R and S records she has certainly made her impression as an artist with her haunting take on the genre with elements of industrial and punk. Her set flowed effortlessly, Paula included her almighty track ‘Gegen’ into her set and the chaotic roar caused me and my friend the hold our hand and smile at each other in appreciation of the track. Paula ended off the night literally with a bang, the ‘Temple’ of techno was open for prayer and I think all of our prayers were heard!