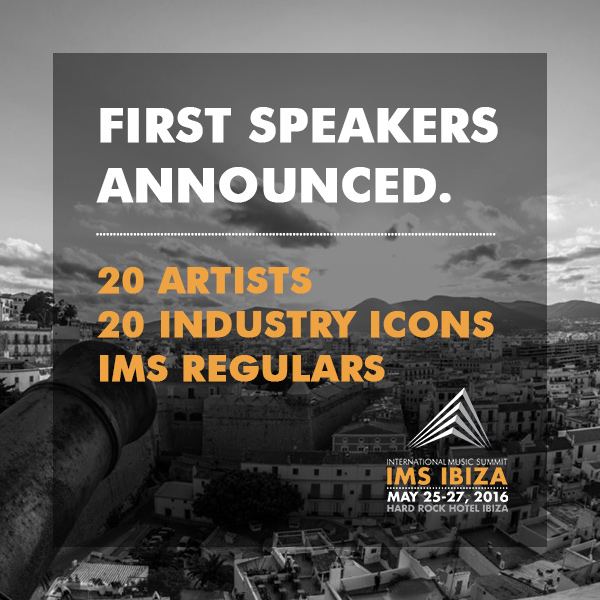 International Music Summit is an educational, inspirational and motivational thought leadership platform dedicated to creating awareness of and appreciation for electronic music and the artistry related to DJing and all related art forms, through the presentation of summits and events that celebrate the historic and ongoing contribution of the genre to art and culture worldwide. IMS annually hosts major events globally in Ibiza, Los Angeles, Singapore, and China.

The International Music Summit presented by Pete Tong was created in 2007 to inspire debate, discussion and to help implement progressive change in electronic music. Since, the conference has become widely regarded as “The Premier Platform for Thought and Leadership in Electronic Music.”

IMS was created a time when electronic music was at rock bottom and in desperate need of a productive community setting for its leaders. Ibiza was the place where the industry had always congregated every summer, so naturally, it was the starting point for our vision.

IMS continues to pave the path in the electronic music industry. Described by media as “the TED of music conferences,” IMS has grown its reach across continents and is now an award-winning conference as voted by The DJ Awards with multiple panels claiming awards as the Top Electronic Music Debates of All Time by Beatport.

The IMS calendar year begins in April with IMS Engage in Hollywood, California as the precursor to our flagship event, IMS Ibiza in May. Following, IMS heads to China in Fall with the final edition of IMS Asia-Pacific which takes place at the end of the year. IMS’s ambition is to continue our global expansion in effort continue the debate and help the genre innovate all over the world.

IMS Ibiza is a comprehensive three-day event featuring live seminars and debates amongst the leaders of the international music community. Through keynotes, interviews, panels and technology master classes, our industry network comes together for thoughtful discussion about the direction and future of electronic music. The IMS Business Report, which has become the industry’s leading data study, is also presented at IMS Ibiza for a global snapshot of vital statistics about the industry. The event has become a major source of industry deals, press launches and is a talking point for worldwide media. Major brands like Corona, Pioneer, Nokia and Coca Cola have used IMS as a platform to launch important initiatives in the electronic music space.

IMS Engage is a one-day summit that is hosted mid-April in the heart of Hollywood. The event was launched in 2012 as a revolutionary way to place electronic music in conversation alongside other industries that thrive in Los Angeles.

IMS Engage is unique in its format: Six unfiltered conversations pair artists or leading figures from electronic music with professionals from the world of film, technology, media and the wider music world in one-on-one conversation. The event is designed to show how far electronic music can reach beyond the confinements of one genre and to uncover important lessons and perspectives from peers of other industries.

IMS Asia-Pacific was introduced at the end of the year in 2014 for the first time in Singapore. Coinciding with ZoukOut Festival, the inaugural Asia-Pacific edition found a unique opportunity to gather artists and industry leaders in the Asia-Pacific region to educate the wider world about the opportunity, challenges and current successes of the market. With contributions from ZoukOut Festival headliners and industry icons both of the region and international markets, Asia-Pacific was a successful first glance into the East and West connection.

IMS Asia-Pacific is a one-day summit featuring a series of panels, keynote speeches and interviews with interactive workshops and tutorials as well. At Asia-Pacific, IMS connects leaders of the region from the worlds of finance, technology, music and media with their Western counterparts for a productive platform of inspiration and education.

Following the success of IMS’s first expansion into Singapore, our global expansion landed in China for the first time in 2015. IMS China was the first electronic music conference to be held in the country and was held in partnership with A2Live and Budweiser Storm Festival. The one-day event brought together Chinese industry leaders and artists for panels and keynote interviews to discuss the opportunities and challenges for the genre in China. IMS China also presented the very first Business Report designed specifically for the region – an eye-opening collection of data to help drive the growing market forward.

To reiterate Robb’s sentiments – thanks to you Ben, Dom, Mark – and your entire team for a incredibly informative and productive inaugural IMS Shanghai. Hospitality was top notch as were the take aways from the conference. Look forward to participating in many more – well done all!
– Matt Rodriguez, AM Only

The conference is the one of the most cutting edge electronic music and tech conferences out there. It brings the heavyweights to the table to share with the current, young generation of music lovers. I guarantee you’ll learn something from it and have a wonderful experience and I would urge you to come and join us.
– Paul Oakenfold, Artist

It was great to see so many familiar faces from fellow DJ’s, to promoters, to agents, to headphone companies, the list goes on. It feels like everybody genuinely cares for the development of this scene and they are excited for the future. It was an honour to be a part of IMS Asia Pacific 2014! Thanks for having us

“IMS a timely reminder of the depth of the community we have at the core of our industry.”
– David Levy, senior agent at William Morris Endeavour

“The IMS has truly become of the leading lights in the EDM world. Based in Ibiza, the spiritual home of dance music. It is easy to enjoy but also a place to do business.”
– James Barton, President of Electronic Music for Live Nation

“It’s the only conference I know where people actually go to the conference!”
– Jho Oakley, Jho Management

“IMS was really inspiring. It’s amazing that electronic music now has a real business focused conference that allows people from around the world to connect and share ideas on how to move the industry forwards. Well done Pete and the team!”
– Luciano, Cadenza Records

“IMS was a great conference. For us being in Australia, it was a fantastic opportunity to meet and discuss business with a great amount of European agents and managers, but more so the keynotes and panels gave a greater understanding of the business on a global level. For sure we will be back next year!”
– Richie McNeil, Stereosonic Director

“IMS was the best conference I have been to in many a year. The seminars, networking, attendees & the Dalt Villa were all top drawer. Congrats on all fronts.”
– Simon Dunmore, Defected

“IMS Grand Finale Festival is an event that could join Alfredo’s ’87 Amnesia sets and Grace Jones dancing naked in the rain at Privilege in Ibiza’s cultural history books.”
– DJ Magazine