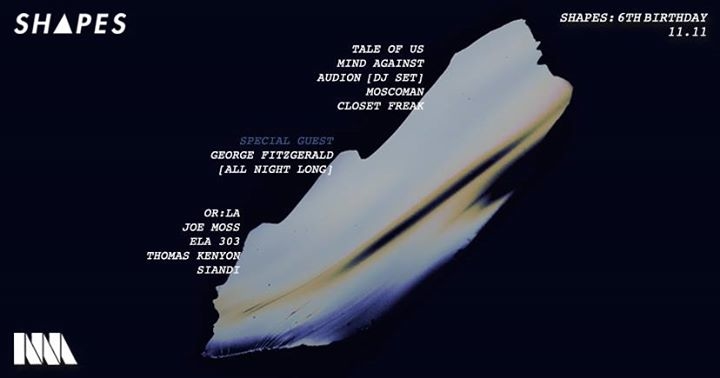 On this cold November evening, Bristol ultra-club Motion hosts Bristol record label Shapes 6th birthday in its ever popular and expanding In Motion event series. The night will hold an array of headliners including Motion’s first ever headliner authentic techno duo Tale Of Us (closing New Year’s Day 2014), special guest and the ever dynamic George Fitzgerald, Mind Against, Moscoman, and Or:La. Shapes have hosted many events across Bristol in different venues, but this particular birthday bash will be sure to amaze and astound avid electronic music lovers!

As I entered the main room the dark figures dancing amidst the piercing blue strobe lighting fit the theme amongst the backdrop of Moscoman’s cleverly erratic and energetic set. The Disco Halal record label founder took funky beats inspired by his middle eastern heritage and combined it with minimal tech to create a by-product of a very satisfied crowd craving good music for the ears and soul. Following Moscoman came IDM Italian duo Mind Against. The anticipation was built as their opening track was the melodramatic and echo like ‘Astral’ collaborated with Tale Of Us, the crowd roared in appreciation as the brass sounds caved the arena. Mind Against carried on their set with harmonious beats and deeply melodic sounds that itched everyone into synchronized body movement.

Room two announced surprise guest house and techno supreme, George Fitzgerald. As an artist ever changing in sound with a broad amount of knowledge in the industry, his release of such infamous tracks as ‘Call It Love’ and ‘Child’ many audience members would have been enlightened and excited to hear his name be announced on the set list. Fitzgerald started with groovy beats that blended into his signature ambient and deep house sounds, the enclosed space of room 2 was filled with sweaty bodies against the backdrop of red mood lighting, making it comparable to an underground club night in Berlin. Room three hosted Shapes favourite and Irish dynamite

Or:La, “one of the most underrated DJs in the UK circuit”!

Sadly, room three didn’t accompany her with as many people as you would have seen in the main room, however, that didn’t mean she didn’t create some major rave vibes pulling out all the stops from acid house, breakbeat, and some Chicago house classics.

The crowd increased and filled the room for a Tale Of Us as they appeared on the main screen, Mind Against did an excellent job of creating the perfect ambiance for their set. My first time to see the Afterlife record label founders wouldn’t be one I would forget; their set was an elevated spectacle of cultivating sand cinematic sound. Winning DJ’S of the year by Mixmag in 2015, their a memorable act as portrayed on this night for their sci-fi inspired soundscapes reminded me of the first time I watched ‘2001: A Space Odyssey’…a moving, ground-breaking experience. A remarkable moment that brought the audience together was through a particular track they played, as I looked up everyone’s hands and fingers simultaneously moved to the beat at the same time, music can surely bring people together! The performance this Italian duo brought on this night is surely an example that electronic music can evoke emotions.