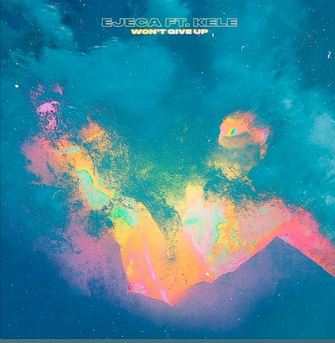 Ejeca continues his rise to the top with the exhilarating ‘Won’t Give Up’ released on Skint Records on 2 October. With the addition of Kele, the lead singer of Bloc Party –  one of the UK’s biggest bands of the 21st century – the end result is sheer magic.

Opening with stirring, heartfelt keyboard notes layered with Kele’s unmistakable vocal, the poignant ‘Won’t Give Up’ then builds to a vibrant, euphoric crescendo with stabbing piano chords and shimmering beats to evoke ‘90s rave anthems. The feel-good lyrics “I’m not going to give up on you” even “in the twisted moments” beautifully capture the feelings of hope that we all share right now.

Ejeca said: “Bloc Party shaped my youth, and Kele’s voice is beautifully distinctive. He’s one that always crosses boundaries and never stays with the same sound. It is a complete honour to work with one of your heroes, not to mention the fact he’s a very humble and nice person. One of the moments of my music career.”

Kele said: “I’ve known Garry (Ejeca) for many years, since he remixed the Bloc Party track ‘Montreal’. I always loved what he did to that track as well as his solo output. So, it was a great to finally work together on a new project. The song is a sweet ballad about resilience and I hope people can relate to the message of not giving up in the face of adversity.

Ejeca, aka Garry McCartney, is one of Northern Ireland’s best musical exports. His down-to-earth attitude has allowed him to gain recognition from his musical peers and with constant solid releases it has always been music first, hype later. Recent Ejeca releases include ‘Polar Nation’ EP on Shall Not Fade which sold out in 6 days; ‘Everglade’ EP on Sasha’s Last Night On Earth; and ‘Ekstac’ on Skint which was Radio 1’s ‘Hottest Record in the World’ and included a stunning Maya Jane Coles remix.