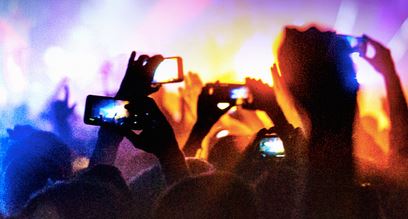 CAMERA FREE EVENTS STARTING TO GET ROLLED OUT!

As we have commented a number of times about the over use and saturation of mobile fones at events, it seems a lot of people also think this way and want change in the scene.

So thankfully, we are starting to see a new trend with promoters offering camera free nights for the discerning clubbers in particular with new one-off club concepts from the promoters ‘Bugged Out’ and the ‘The Secret DJ’ at East London venue Hangar.

Their idea is simple and described as, “a blacked-out audio experience”, set in ‘The Dark Room’ where upon entry,

clubbers will have stickers placed on their phone cameras before they immerse themselves into the venue.

A bespoke surround sound 5:1 system has been created by former DC – 10 sound engineer Andy Kayll for the night, and linked to a concealed DJ booth where four anonymous DJ’s will blast out their sets out over the course of the night, which sounds ace to us!! Bring it on.
Hopefully some of the Dublin promoters will start having a think about this ……and before anyone replies about their right to have their fone out, check the events details first, if its advertised as a camera free event then that’s what it’ll be, so then this specific event isn’t for you!
Tickets can be got here – here

Can You Feel It? How The Beeb Got House Music All Wrong – Episode 1