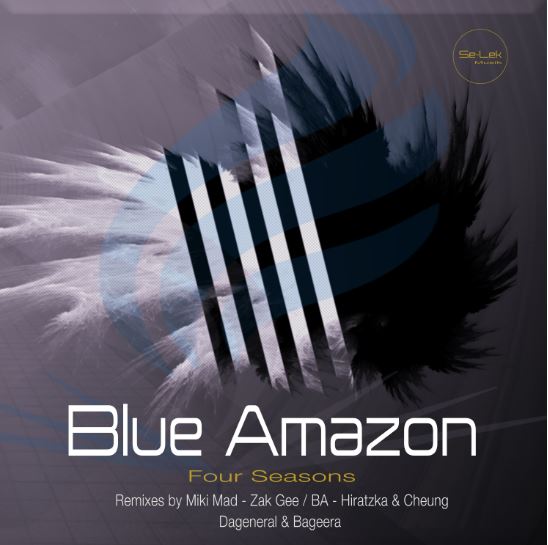 If you were a follower of the progressive and epic house scene in the 90’s its very likely you are familiar with Blue Amazon – Four Seasons. The original was released in 1995 on what became the legendary “Jackpot Records” and a very prominent music stable for the Progressive House sound.

The original was considered part of a new wave of British club music that was championed by the likes of Sasha, John Digweed, Dave Seaman and an array of others. Four Seasons in its sound was slightly harder edged at the time than other Progressive House tracks and because of its European Techno influences, it was also supported through to the likes of Carl Cox and featured on many DJ mix albums, whilst also heard across key clubs worldwide.

22 years on from its original release – Four Seasons is back with us with a new set of remixes for the modern era.

First of the remixes is by the developing production partnership of “Blue Amazon & Zak Gee”. The BA/Zak Gee sound is one which is consistently developing and with its own unique chemistry/signature. On this remix the pair have really absorbed the theme of the original but reworked it into a modern groove driven affair with good amount of detail and energy.

Miki Mad – takes center stage next shortly after releasing his own single “Night Of White Satin” on Se-Lek. Miki Mad is the very talented Uruguayan producer/DJ who resides in Barcelona. If you are familiar with the Miki Mad sound this remix won’t disappoint as it really encapsulates his cross breed of Tech House/Techno influences in style. Its very energy driven, darker edged and also carries the theme of the original.

The third remix is by – Hiratzka & Cheung who are also known producers on the progressive house circuit. Mike Hiratzka was one of the original members of the very vibrant scene in Florida in the 90’s before moving to LA. Teamed up with Danny Cheung – this stateside pair have provided a very crafted rework of the original with unique quality. It’s full of gifted studio production tricks and has great emphasis on glitch style vocals.

The final mix is by – DaGeneral & Bagreea who need little introduction to the Se-Lek Musik stable. This Scottish-based duo has released a number of Techno influenced productions with us including their own debut album “The World Is Not Real”. On this remix they have taken a slightly different approach, direction and employed more of a laid-back house music feel. It’s quite deep, mood driven and has emotive qualities.