Although “Four young men in an un-taxed car” sounds like the start of a really poor joke, it wasn’t. It was the start of a Life-Affirming moment for me. It was the moment I knew my path was revealed in all its sonic glory.  After the usual detours and wrong turns, arguments, and makeups, we were finally outside the Leeds Warehouse on Friday night.

Slowly doing the “Queue Shuffle” closer and closer to the moment of truth that would be the make or break of the evening. It was our turn to do the slow dance with the doormen and their wandering hands, never breaking eye contact as they rummaged in places only water can reach. The nod came and the arm extended to guide us in.

Entering the main floor, the Bass pounding and the lights playing their tricks resident Alex Handley (I know this as I kept a predatory eye on him, waiting for end of set so I could blag a copy) faded out the track playing. Controlling both the dance floor and the silence, letting the void build. Then out of that silence came that vocal train … Waaa Waa Wa Waaa. The view to the booth blocked by a sudden ocean of hands as this computer sounding riff rolled its staccato net over a willing crowd… “We hate all commercial house… masturbators” echoed from the rig.

The tune that spawned a host of genres, was the focal point behind the start-up of one of Electronic music’s long-standing labels and put the North well and truly on the map on the Underground dance scene under the simple moniker BLEEP. 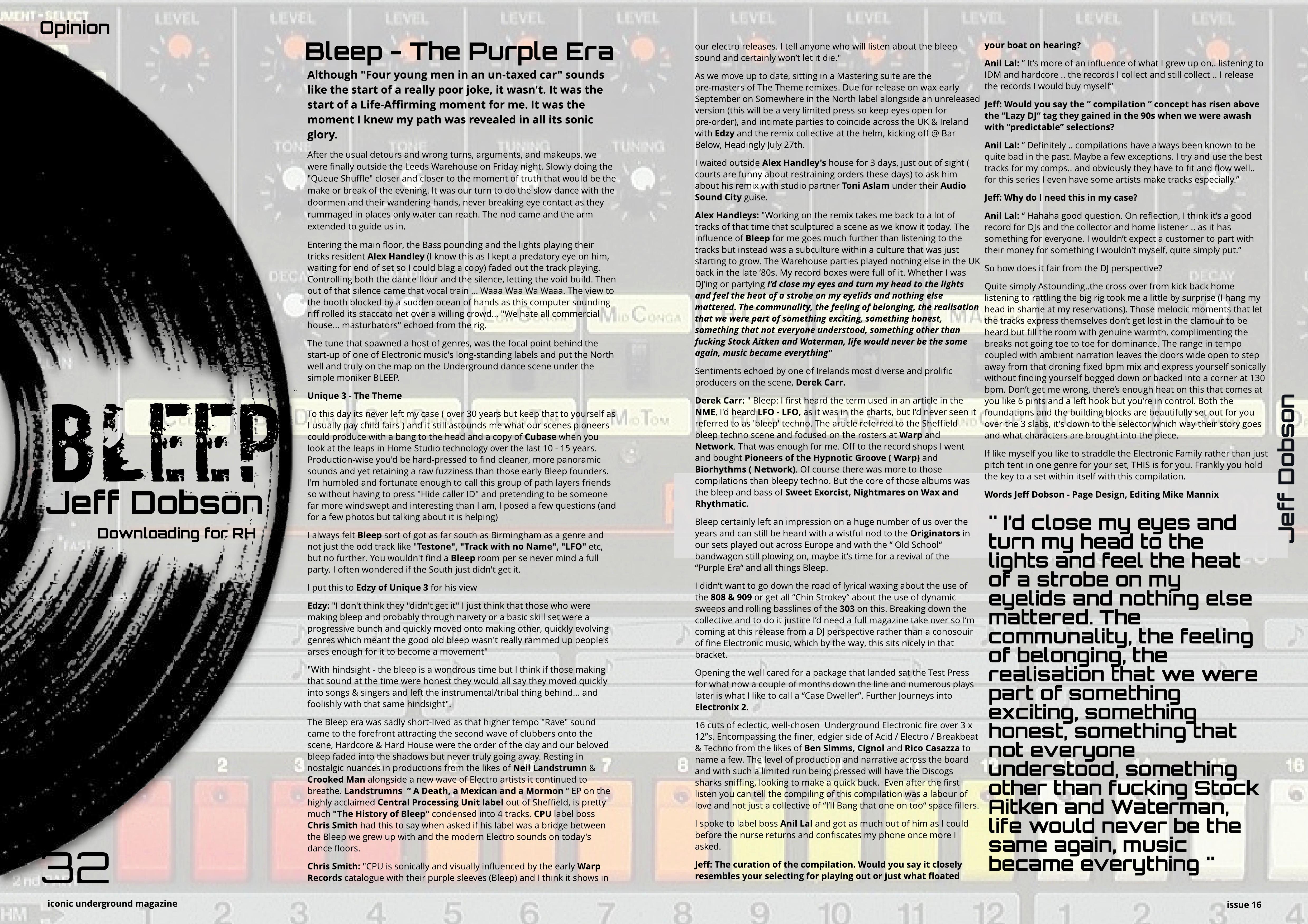 To this day its never left my case ( over 30 years but keep that to yourself as I usually pay child fairs ) and it still astounds me what our scenes pioneers could produce with a bang to the head and a copy of Cubase when you look at the leaps in Home Studio technology over the last 10 – 15 years. Production-wise you’d be hard-pressed to find cleaner, more panoramic sounds and yet retaining a raw fuzziness than those early Bleep founders.  I’m humbled and fortunate enough to call this group of path layers friends so without having to press “Hide caller ID” and pretending to be someone far more windswept and interesting than I am, I posed a few questions (and for a few photos but talking about it is helping)

I always felt Bleep sort of got as far south as Birmingham as a genre and not just the odd track like  ” Testone ” ” Track with no Name” “LFO ”  etc., but no further. You wouldn’t find a Bleep room per se never mind a full party. I often wondered if the South just didn’t get it.

I put this to Edzy of Unique 3 for his view

E: “I don’t think they “didn’t get it” I just think that those who were making bleep and probably through naivety or a basic skill set were a progressive bunch and quickly moved onto making other, quickly evolving genres which meant the good old bleep wasn’t really rammed up people’s arses enough for it to become a movement”

“With hindsight – the bleep is a wondrous time but I think if those making that sound at the time were honest they would all say they moved quickly into songs & singers and left the instrumental/tribal thing behind… and foolishly with that same hindsight”.

The Bleep era was sadly short-lived as that higher tempo “Rave” sound came to the forefront attracting the second wave of clubbers onto the scene, Hardcore & Hard House were the order of the day and our beloved bleep faded into the shadows but never truly going away. Resting in nostalgic nuances in productions from the likes of Neil Landstrumn & Crooked Man alongside a new wave of Electro artists it continued to breathe. Landstrumns  “ A Death, a Mexican and a Mormon “ ep on the highly acclaimed Central Processing Unit label out of Sheffield, is pretty much “The History of Bleep” condensed into 4 tracks. CPU label boss Chris Woods had this to say when asked if his label was a bridge between the Bleep we grew up with and the modern Electro sounds on today’s dance floors.

Chris Wood:  “CPU is sonically and visually influenced by the early Warp Records catalogue with their purple sleeves (Bleep) and I think it shows in our electro releases. I tell anyone who will listen about the bleep sound and certainly won’t let it die.”

As we move up to date, sitting in a Mastering suite are the pre-masters of The Theme remixes.  Due for release on wax early September on Somewhere in the North label alongside an unreleased version (this will be a very limited press so keep eyes open for pre-order), and intimate parties to coincide across the UK & Ireland with Edzy and the remix collective at the helm, kicking off @ Bar Below, Headingly July 27th.

I waited outside Alex Handley’s house for 3 days, just out of sight ( courts are funny about restraining orders these days) to ask him about his remix with studio partner Toni Aslam under their Audio Sound City guise.

Alex Handleys: “Working on the remix takes me back to a lot of tracks of that time that sculptured a scene as we know it today. The influence of  Bleep for me goes much further than listening to the tracks but instead was a subculture within a culture that was just starting to grow. The Warehouse parties played nothing else in the UK back in the late ’80s. My record boxes were full of it. Whether I was DJ’ing or partying –

| I’d close my eyes and turn my head to the lights and feel the heat of a strobe on my eyelids and nothing else mattered. The communality, the feeling of belonging, the realisation that we were part of something exciting, something honest, something that not everyone understood, something other than fucking Stock Aitken and Waterman, life would never be the same again, music became everything”

Sentiments echoed by one of Irelands most diverse and prolific producers on the scene, Derek Carr.

Derek Carr: ” Bleep: I first heard the term used in an article in the NME, I’d heard LFO – LFO, as it was in the charts, but I’d never seen it referred to as ‘bleep’ techno. The article referred to the Sheffield bleep techno scene and focused on the rosters at Warp and Network. That was enough for me. Off to the record shops I went and bought Pioneers of the Hypnotic Groove ( Warp) and Biorhythms ( Network). Of course there was more to those compilations than bleepy techno. But the core of those albums was the bleep and bass of Sweet Exorcist, Nightmares on Wax and Rhythmatic”

Bleep certainly left an impression on a huge number of us over the years and can still be heard with a wistful nod to the Originators in our sets played out across Europe and with the “ Old School “ bandwagon still plowing on, maybe it’s time for a revival of the “Purple Era“ and all things Bleep.

I didn’t want to go down the road of lyrical waxing about the use of the 808 & 909 or get all “Chin Strokey“ about the use of dynamic sweeps and rolling basslines of the 303 on this. Breaking down the collective and to do it justice I’d need a full magazine take over so I’m coming at this release from a DJ perspective rather than a conosouir of fine Electronic music, which by the way, this sits nicely in that bracket.

Opening the well cared for a package that landed sat the Test Press for what now a couple of months down the line and numerous plays later is  what I like to call a “ Case Dweller”. Further  Journeys into Electronix 2.

16 cuts of eclectic, well-chosen  Underground Electronic fire over 3 x 12”s. Encompassing the finer, edgier side of Acid / Electro / Breakbeat & Techno from the likes of Ben Simms, Cignol and Rico Casazza to name a few. The level of production and narrative across the board and with such a limited run being pressed will have the Discogs sharks sniffing, looking to make a quick buck.  Even after the first listen you can tell the compiling of this compilation was a labour of love and not just a collective of “I’ll Bang that one on too“ space fillers.

I spoke to label boss  Anil Lal and got as much out of him as I could before the nurse returns and confiscates my phone once more I asked.

Jeff: The curation of the compilation. Would you say it closely resembles your selecting for playing out or just what floated your boat on hearing?

Anil Lal: “ It’s more of an influence of what I grew up on.. listening to IDM and hardcore .. the records I collect and still collect .. I release the records I would buy myself“

Jeff: Would you say the “ compilation “ concept has risen above the “Lazy DJ“ tag they gained in the 90s when we were awash with “predictable’’ selections?

Anil Lal: “ Definitely .. compilations have always been known to be quite bad in the past. Maybe a few exceptions. I try and use the best tracks for my comps.. and obviously they have to fit and flow well.. for this series I even have some artists make tracks especially.”

Jeff: Why do I need this in my case?

Anil Lal: “ Hahaha good question. On reflection, I think it’s a good record for DJs and the collector and home listener .. as it has something for everyone. I wouldn’t expect a customer to part with their money for something I wouldn’t myself,  quite simply put.”

So how does it fair from the DJ perspective?

Quite simply Astounding..the cross over from kick back home listening to rattling the big rig took me a little by surprise (I hang my head in shame at my reservations). Those melodic moments that let the tracks express themselves don’t get lost in the clamour to be heard but fill the room with genuine warmth, complimenting the breaks not going toe to toe for dominance.  The range in tempo coupled with ambient narration leaves the doors wide open to step away from that droning fixed bpm mix and express yourself sonically without finding yourself bogged down or backed into a corner at 130 bpm. Don’t get me wrong, there’s enough heat on this that comes at you like 6 pints and a left hook but you’re in control. Both the foundations and the building blocks are beautifully set out for you over the 3 slabs, it’s down to the selector which way their story goes and what characters are brought into the piece.

If like myself you like to straddle the Electronic Family rather than just pitch tent in one genre for your set, THIS is for you. Frankly you hold the key to a set within itself with this compilation.