NOW WE ALL LOVE A MYSTERY DON’T WE? WHETHER IT’S NESSIE, SASQUATCH, DOES SOLOMUN EVER GO HOME? OR THE SUNDAY AFTERNOON RERUNS OF COLUMBO AS WE TRY AND GET OUR SHIT TOGETHER FROM THE NIGHT BEFORE. YES? GOOD. WELL BOYS & GIRLS, DIM THE LIGHTS AND HUDDLE UP CLOSE AS I TELL YOU A TALE…..

An e-mail sat in my inbox for a couple of weeks at the turn of the year and the reason being it bore all the hallmarks of Spam. No header, unrecognisable return address and not part of the regular digital promo distributors that dwell in the constant “ping” that I now hear in my sleep. With my finger hovering over the delete icon, curiosity got the better of me (and the cat if rumours are to be believed) and I opened said e-mail. Expecting to be instantly rich thanks to my Nigerian Prince willing to share his wealth with me for no other reason than he’s a damn good egg, I was faced with what at first glance I mistook for a Blackmail approach (yea I panic easy). After regulating my breathing again I re-read the lines which flipped my emotional state to intrigue from the constant paranoia where it usually dwells. 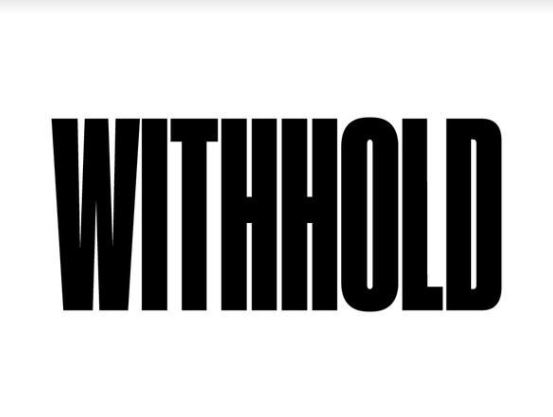 Withheld 01-06
Physical copies Bleep/ Hardwax in spring.
Enjoy (Your one of five recipients).

Cryptic? That’s not the half of its people. Confident in my anti-virus the download was activated and after a couple of minutes there sat the proffered six ep’s. And guess what? Not a lot of information was embedded into these WAVS regarding artists responsible, no release art, nothing! Just the track titles and running times.

What they did contain is an abundance of deep ambient/D&B / chilled breaks that were truly astounding and forged in the studios of craftsmen who know their trade inside out. Kinda bag you’d drop at the afters that still hold enough groove as not to become “couch melters” and kill the vibe. There’s some 140s in there that are by no means out of place in the whole scheme of things, and if this collective is indicative of what the label is going to bring to the table, I can only foresee good things. Now by this time, my interest was piqued and my search for The Truth began in earnest.

Who’s behind this? (Both the label and the e-mail) Who are the featured artists so I can give accolades? Who are the other four recipients? If size doesn’t matter, why don’t my shoes fit?

So with a Poundland FBI badge and £1:27 on a Burner Phone I rang Damo B as I had a hunch he knew something and after an unspecified amount of time of explaining that we have met before and providing specific times and dates, and yes I am sure we have met and spoken and yes, I am the sort of person He’d speak to in public, I was left with the merest of forward motion in my quest. Himself, yes a recipient, but alas was as much in the dark as myself. You could say that was my “light bulb moment”.

It was all starting to make sense now. Withheld!!!!!!… Are we in the midst of a faceless project, where the only information we need is the title? No fanfare or “name drops” or artists catalogues to bolster the commitment to wax? Well, boys & girls, I do believe we are and I for one welcome the idea and the belief in the music being acquired to forgo a huge chunk of promotional options, but in fairness, I’ve heard and played them so have total faith that these releases will sell themselves.

” There’s no secret to my love of Bleep.

Let’s face it, the column title is a bit of a giveaway. Not really an attention-grabbing headline in itself I know but I’m not having a one-man game of”State the Obvious”. There’s a bonafide reason, honest. Going through mailers just after Xmas, I came across a test press with a typed letter inside the sleeve. Very professional indeed as I usually just get dodgy drawings of Suns or Donkeys scribbled in crayon and some illegible gibberish. Now I have to be honest at this juncture and say that on completion of reading I was filled with excitement and trepidation in equal measures.

Why? Well, before me sat an ep of unreleased Bleep taken from the original DAT-masters recorded back in 92 by Marco Repetto entitled Planet Love – Technicolor Dream and from text provided I’m informed this release is part 1 of 2. The catalogue of work on this pair was all recorded between 91-93 and should be on the shelves from March through to May of this year on OORWURM RECORDS. So why the trepidation you ask? Well, I’m not a massive Old School fan. I was there, I lived it and I heard 90% of its age badly and come to the point of where the whole Old Skool scene has become a bit of a cliché of itself (but we’ll come to that little minefield in a later edition)

If this pack had been released back in 92 I can honestly say it would rest its bones in that 10% that matured nicely and that’s down to the fact that it sounds and feels like Marco scribed this release not with the dance floors of way back at the forefront of his mind, but especially for today’s buyer. It’s got all the sonic ingredients and elements you’d expect from almost 30 years ago, but the narrative was based in the future. Maybe down to this, if it had been released back in 92 it may have gone unnoticed, who’s to say. I honestly removed the record from the platter to check the run-out details just in case there had been a mix-up and added to confirmation from label boss Michiel Moskou that all was as should be, I have to say I’m rather looking forward to the next instalment.