Since the last issue, I’ve been bombarded with two simple questions.

To answer the first one, if you know me well enough you know exactly what I’m doing in your garden and why. As to Why Bleep, well it could be a homage to my love of the Purple Era and the electronic generated sounds that followed through the last 30 plus years or it could be a shout out to our overpaid and highly underworked Editor who has the thankless task of removing the liable statements that my column will throw up as we meander our way through the Dance Music scene. I’ll let you be the judge of that….

So what can you expect to find in these brief pages? I suppose the easiest thing is to tell you lovelies firstly are what you won’t find.

| There will be No creepy affectionate thigh rubbing accolades to those Black Tee, Tattooed Sleeve Wearing Trance exporters who cunningly hide behind the term TECHNO, waiting in Ernest for the drop.

Devious as they are using the illusion of stage production to mask the fact they’re playing what can only be described as resembling the sonic delight of a 6-year-old in full tantrum ably joined by “ Uncle Pete” ( Black sheep and functioning alcoholic) banging out His impromptu rendition of Insomnia on an old Casio.

What you will find are the overlooked artists & labels that have been shaping the scene without the fanfare or smoke and mirrors of social media. Stalwarts, Pioneers and newcomers who lack the vulgar lust for fame that prop up very fragile egos that have become more and more apparent over the years.

So without further digression let’s start digging. I’d like to introduce to those of you who are not aware of Producer / DJ / Label Boss and proprietor of a smashing Pink suitcase, Mullingar’s very own Mr Derek Carr.  “ 2018 Producer of the Year “ in our Weekend Vandals chart and with a plethora of releases under his belt on some of the scenes most valued labels culminating in one of the major factors in the rise of the  homeless DJ ( seriously the man has a back catalogue that would give the late Frank Zappa a run for his money). Whether touring, in the studio or being mistaken for the Oakland Raiders quarterback, Derek brings a humble approachability with him which transpires in his music. (Odd really then that most my research was achieved from rooting through his bins at 4 am).

Derek’s story starts like most with disappointment. Disappointment that this wee boy from the streets of Mullingar would not fulfill his calling and take to the stage as Lead Male on the National Ballet circuit. A blow not many of us could have withstood at such a tender age but with Derek, he embraced it and his Wayne Sleep posters were soon replaced as he embarked on his musical journey. Reminiscing about those early days and how new inspirations came into his life he told me,

DC “ Depeche Mode was the first band to truly inspire me to create music. I bought my first keyboard in 1987 with visions of forming a pop band playing electronic music. Not long after that House Music appeared over the horizon and my dreams of being in Depeche Mode Mk.II was over. 808 State were a huge influence on my early attempts at Techno. I was drawn to the melodies that were scattered all through the ’90’ album. From there it was a journey of discovery, Derrick May, Dave Angel, Carl Craig, Kenny Larkin, Warp, and Network Records all helped shape my musical future”.

In 2001 Derek launched his own label TRIDENT RECORDS and debuted his first release as both an artist and a label with his Copper Beech ep and like most of us with Anniversaries, birthdays, etc he forgot about it for almost two decades!!! Why Derek, Why??

DC “ Trident was originally set up for the Copper Beech ep to be a one-off release, just to get my music some notice, almost as a promotional tool. I hadn’t given it any thought for 20 odd years until Clone.nl approached me with a view to releasing some older music. I asked them if they’d be interested in releasing new music and they jumped at the chance. Hence the re-launch 20 years later. I had built up a decent following and made some fantastic contacts in the industry (He obviously means me but knows I’m the modest type) in the intervening years which has made this possible. When I started out 20 years ago I didn’t even know what distribution or mastering was..”

With the long overdue follow up to Copper Beech aptly titled Reset ep flying off the shelves ( We Play House Music is yet another Carr classic in my humble opinion), Trident 03 sitting pretty in the pre-master stage and releases scheduled on some of my favourite labels there’s no signs of slowing or a diminishing quality of Derek’s work . Inspiring the next wave of producers in his native Ireland like Peter Sweeney who shared a release with Derek on Dublin imprint 393 Records (after negotiating a small fee for his input) gushed,

PS” He’s a credit and inspiration to people like me. To think someone like him who has been around for as long as he has, his current output is very healthy and only getting better”.

Recounting my “research” experience an unexpected and brief meeting took place with Derek which if I’m honest left both me and his street cred somewhat unsettled. Below is a transcript as to revisit that early morning shake-up is still an open wound.

Me “Never mind that, I can hear music. What song you playing Derek?”

DC” It’s nothing ok, I don’t have to speak to people like you!”

DC( heading back inside his home)”Leave me alone, it’s nothing, its….its… Not what you think, please just go”

Me “We can’t leave it like this….Is there someone I can call?….It’s going to be ok”

Derek looked me straight in the eye as the front door slowly closed. 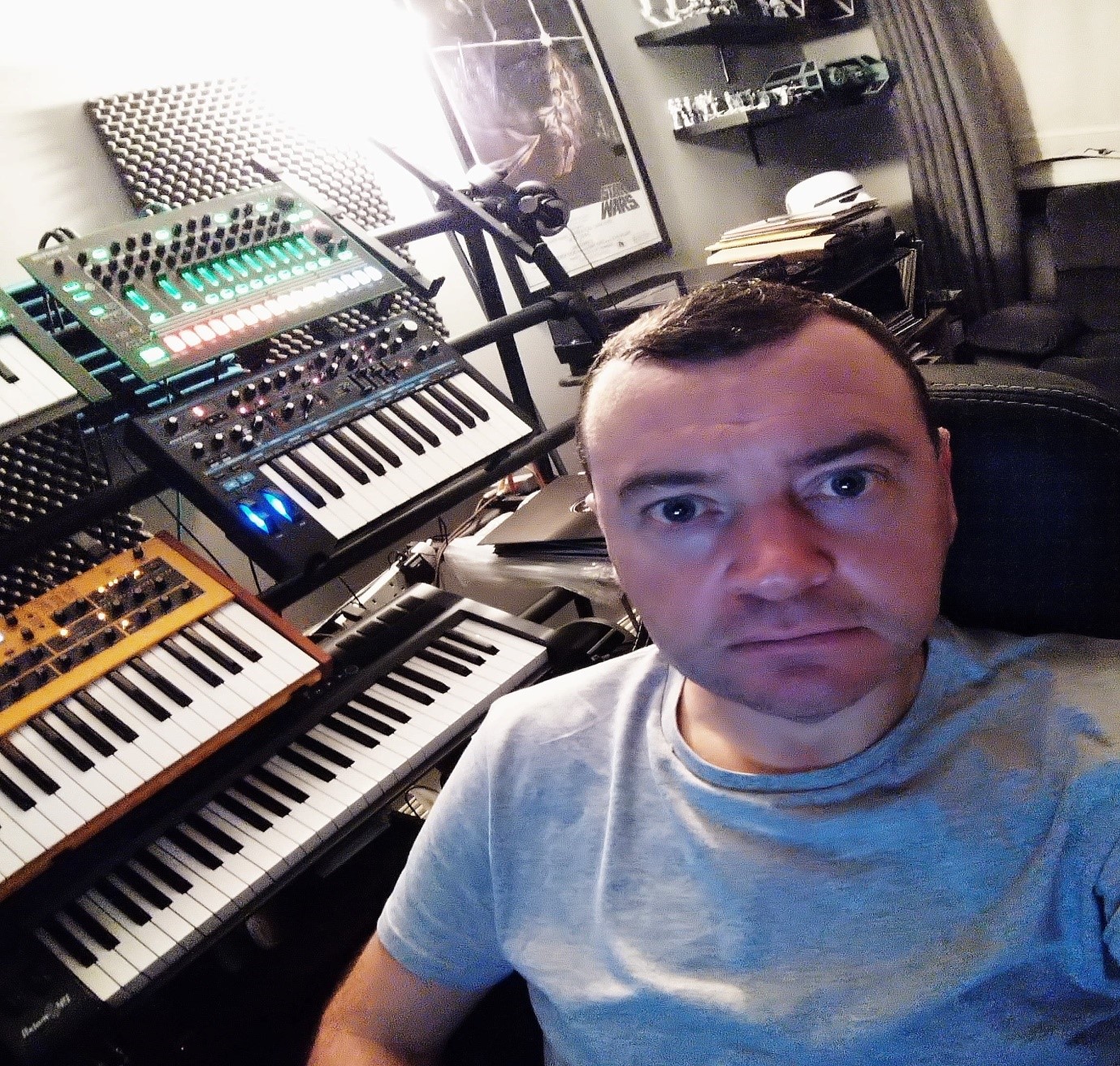 IF like me you’ve followed the career of Kirk Degiorgio for more years than you care to remember, you’ll know it’s been a decade since we were presented with a body of work the music industry calls “an album”. Well guess what? Yup, the wait is over as he’s only gone and done it.  Under the AS ONE guise Kirk delivers COMMUNION on the highly acclaimed De:tuned label.  Fortunate enough to receive an advance promo copy some weeks ago from Ruben Boons over at De:tuned and tearing a few pages from my diary to absorb the release I tentatively shut the outside world off and immersed myself.

As the opening track Absorption Spectra introduces itself to the listener you know instantly that you’re in for the duration and certainly not a “skim through and return to later “sketch on the horizon. Captivating with its indulgent dreamy sweeps it commands your full attention for the next hour or so as a well-devised book cover draws you in anticipation of meeting the characters on the pages ahead. Downburst gently draws you from your reverie as the album starts to pick up the pace and build a wall of sound (as the whole work does) without getting out of hand and becoming a collection of “Bangers” per se.

The hint of sorrow that’s blanketed with a rich positivity on Irimas or the Indigenous vibe that Outer Edge projects, for me, truly shows a producer at one with his work and himself ( as an album should be) in my opinion. There are the more dance floor friendly cuts like The Ladder and the threats of letting off steam on The Specialist & We Are But Shadow but to Kirks credit he keeps the reigns taught and steers them beautifully into the realm of that early morning head down, lost in “one’s own space” state of bliss where being taken by the hand and giving oneself up to the narrative is the only course of action. Almost as a reprise the album concludes in the same cinematic scapes as we started with on Emanation and those ethereal tones which lulled us in at the very beginning.

As a whole package Communion certainly delivers on the promise foretold, idyllic home listening which for me is partly credited to the curation of the running order and in the right setting, and in the right hands, what leans heavily towards the collector piece is certainly transferable to the big rig. All in all an absolute pleasure to listen to (enhancing my journey to and from gigs since receiving a copy) and instantly staking a place in my end of year “Album of 019” conundrum.

Usually when you see the words “Charity” or “Fundraiser” you get that ice-cold shiver down your spine and can almost hear Tony Hadley churning out the death throes of Spandau’s greatest hits or a game of “Who?” as another Z- list “CELE-BRAT-Y” is wheeled out before your uncaring eyes.      Imagine then my delight to receive an invite to an aforementioned fundraiser in aid of Oxfam, courtesy of Boxjam over in Leeds. Only this time, looking at the entertainment on offer, flights and logistics were being booked before you could say “Trance is Pants”. Added to this was the chance to hook up with friends and peers for shits and giggles and quite possibly a dance-off at some point in the proceedings (8th Runner up in the Humberside “Give it up mate” 1986).

Between two rooms, one hosting Live hardware, the other a selection of DJs, I crammed in as much audio as I could.  Good friend & 3 am Records boss Al Bradley was the first artist on the menu on entering and always a pleasure to hear behind the booth and to spend time with. Always enjoyed his work. As cogs were oiled and palms crossed it was over to Room 1 for Perseus Traxx who laid out a beautifully educated set littered with graceful nuances from across genres. Thoroughly enjoyed. Now show me an artist in a mask and I’ll show you my heels just about every time but kicking a live Old School Electro hardware set was a chap playing under the moniker CYBEREIGN and man alive was he dropping. Sharing this jam in the company Manchester’s Dammo B, we nodded to each other and for the want of Lino, it could have been yet another night in A&E.

As the midnight bells pealed it was time to enter into the realm of the 303 as downright filth laced duo Auto Sound City launched their machines for a mesmerizing hour of corrosive goodness. At this point the superlatives would start to flow describing the closing act but we’ll keep it simple. Edzy & Gez Varley / Unique 3&LFO, wrapping the proceedings up with a B2B set encompassing the wide range that Techno offers when two Legends of the game come together. Quality ensured.       Big Love to Boxjam crew for the invite (was Tony Hadley on early doors?) and everyone that gave their time and craft for free on a great night and apologies to those I missed…next time.