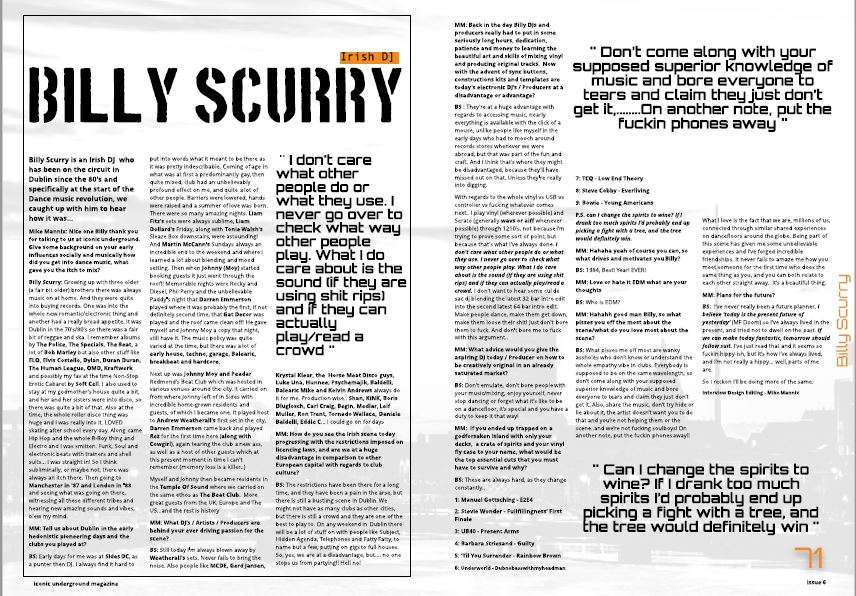 Billy Scurry is an Irish DJ who has been on the circuit in Dublin since the 80’s and specifically at the start of the Dance music revolution, who doesn’t mince his words and tells it as it is and was.. I  caught up with him to hear how it was and is…

Mike Mannix: Nice one Billy thank you for talking to us at iconic underground. Give some background on your early influences socially and musically how did you get into dance music, what gave you the itch to mix?

Billy Scurry: Sound Mike, growing up with three older (a fair bit older) brothers there was always music on at home. And they were quite into buying records. One was into the whole new romantic/electronic thing and another had a really broad appetite. It was Dublin in the 70’s/80’s so there was a fair bit of reggae and ska. I remember albums by The Police, The Specials, The Beat, a lot of Bob Marley but also other stuff like ELO, Elvis Costello, Dylan, Duran Duran, The Human League, OMD, Kraftwerk and possibly my fav at the time Non-Stop Erotic Cabaret by Soft Cell. I also used to stay at my godmother’s house quite a bit, and her and her sisters were into disco, so there was quite a bit of that. Also at the time, the whole roller disco thing was huge and I was really into it. LOVED skating after school every day. Along came Hip Hop and the whole B-Boy thing and Electro and I was smitten. Funk, Soul and electronic beats with trainers and shell suits… I was straight in! So I think subliminally, or maybe not, there was always an itch there. Then going to Manchester in ’87 and London in ’88 and seeing what was going on there, witnessing all these different tribes and hearing new amazing sounds and vibes, blew my mind.

MM: Tell us about Dublin in the early hedonistic pioneering days and the clubs you played at?

BS: Early days for me was at Sides DC, as a punter then DJ. I always find it hard to put into words what it meant to be there as it was pretty indescribable. Coming of age in what was at first a predominantly gay, then quite mixed, club had an unbelievably profound effect on me and quite a lot of other people. Barriers were lowered, hands were raised and a summer of love was born. There were so many amazing nights. Liam Fitz’s sets were always sublime, Liam Dollard’s Friday, along with Tonie Walsh’s Sleaze Box downstairs, were astounding! And Martin McCann’s Sundays always an incredible end to the weekend and where I learned a lot about blending and mood setting. Then when Johnny (Moy) started booking guests it just went through the roof!! Memorable nights were Rocky and Diesel, Phil Perry and the unbelievable Paddy’s night that Darren Emmerson played where it was probably the first, if not definitely second time, that Gat Decor was played and the roof came clean off! He gave myself and Johnny Moy a copy that night, still have it. The music policy was quite varied at the time, but there was a lot of early house, techno, garage, Balearic, breakbeat, and hardcore.

Next up was Johnny Moy and Peadar Redmond’s Beat Club which was hosted in various venues around the city. It carried on from where Johnny left off in Sides with incredible home-grown residents and guests, of which I became one. It played host to Andrew Weatherall’s first set in the city, Darren Emmerson came back and played Rez for the first time here (along with Cowgirl), again tearing the club a new ass, as well as a host of other guests which at this present moment in time I can’t remember.(memory loss is a killer..)

Myself and Johnny then became residents in the Temple Of Sound where we carried on the same ethos as The Beat Club.  More great guests from the UK, Europe, and The US…and the rest is history

MM: What DJ’s / Artists / Producers are behind your ever driving passion for the scene?

MM: How do you see the Irish scene today progressing with the restrictions imposed on licencing laws, and are we at a huge disadvantage in comparison to other European capital with regards to club culture?

BS: The restrictions have been there for a long time, and they have been a pain in the arse, but there is still a bustling scene in Dublin. We might not have as many clubs as other cities, but there is still a crowd and they are one of the best to play to. On any weekend in Dublin there will be a lot of stuff on with people like Subject, Hidden Agenda, Telephones and Fatty Fatty, to name but a few, putting on gigs to full houses. So, yes, we are at a disadvantage, but…. no one stops us from partying!! Hell no!

MM: Back in the day Billy DJs and producers really had to put in some seriously long hours, dedication, patience and money to learning the beautiful art and skills of mixing vinyl and producing original tracks.  Now with the advent of sync buttons, constructions kits and templates are today’s electronic DJ’s / Producers at a disadvantage or advantage?

BS : They’re at a huge advantage with regards to accessing music, nearly everything is available with the click of a mouse, unlike people like myself in the early days who had to mooch around records stores whenever we were abroad, but that was part of the fun and craft. And I think that’s where they might be disadvantaged, because they’ll have missed out on that. Unless they’re really into digging.

With regards to the whole vinyl vs USB vs controller vs fucking whatever comes next. I play vinyl (wherever possible) and Serato (generally wavs or aiff whenever possible) through 1210’s, not because I’m trying to prove some sort of point, but because that’s what I’ve always done.

I don’t care what other people do or what they use. I never go over to check what way other people play. What I do care about is the sound (if they are using shit rips) and if they can actually play/read a crowd. I don’t want to hear some cul de sac DJ blending the latest 32 bar intro edit into the second latest 64 bar intro edit. Make people dance, make them get down, make them lose their shit! Just don’t bore them to fuck.

And don’t bore me to fuck with this argument. 😉

BS: Don’t emulate, don’t bore people with your music/mixing, enjoy yourself, never stop dancing or forget what it’s like to be on a dancefloor, it’s special and you have a duty to keep it that way!

BS: These are always hard, as they change constantly.

P.S. can I change the spirits to wine? If I drank too much spirits I’d probably end up picking a fight with a tree, and the tree would definitely win.

MM: Hahaha yeah, of course, you can, so what drives and motivates you, Billy?

BS: What pisses me off most are wanky assholes who don’t know or understand the whole empathy vibe in clubs. Everybody is supposed to be on the same wavelength, so

don’t come along with your supposed superior knowledge of music and bore everyone to tears and claim they just don’t get it.

Also, share the music, don’t try hide or lie about it, the artist doesn’t want you to do that and you’re not helping them or the scene..and we’re not fucking soulboys!

On another note, put the fuckin phones away!!

What I love is the fact that we are, millions of us, connected through similar shared experiences on dancefloors around the globe. Being part of this scene has given me some unbelievable experiences and I’ve forged incredible friendships. It never fails to amaze me how you meet someone for the first time who does the same thing as you, and you can both relate to each other straight away. It’s a beautiful thing

I believe ‘today is the present future of yesterday’ (MF Doom)

so I’ve always lived in the present and tried not to dwell on the past. If we can make today fantastic, tomorrow should follow suit. I’ve just read that and it seems so fuckin hippy-ish, but it’s how I’ve always lived, and I’m not really a hippy… well, parts of me are.

So I reckon I’ll be doing more of the same.