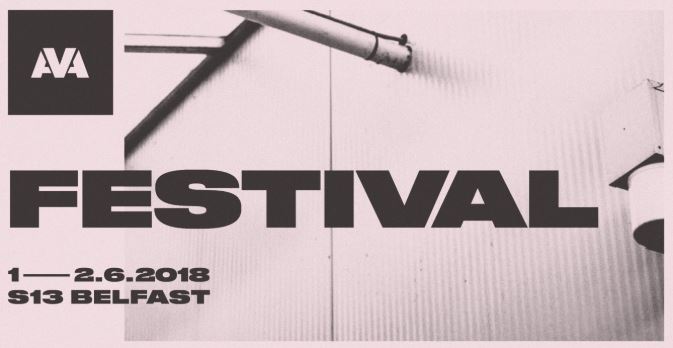 AVA 2018 has finally arrived! I felt like I have been waiting since AVA 2017 finished, a whole year of pondering the lineup, what new will be in store and will it top of the year just been? This year it has left its old home of T13 Titanic Quarter to S13 which was none other than an old B and Q warehouse. That’s one gardening trip not to expect! The conferences having previously been in T13 also moved to The Mac media and arts centre. Expanding across Belfast was a bold and impactful choice, however, the stellar lineup and hype surrounding the festival had definitely made up the decision!

A tired eyes techno enthusiast twosome (myself and Ela) entered The Mac centre a flourish with press and music enthusiast audience members in the lobby awaiting the day’s conferences. Already I bumped into many familiar faces I have become friendly with over the last three years of going AVA. Festival founder Sarah Mcbriar humbly greeted her guests to the opening conference, I felt an overwhelming joy for Sarah as every year she works so hard to accomplish what was once a small project into an event brimming with passion, creativity, and love. Mcbriar and her opening host introduced the conference explaining how

emerging electronic music in both the north and south of Ireland are outstanding.

Furthermore, AVA turning into a global event company hosting in places such as London and Amsterdam with partnerships including Resident Advisor, Boiler Room and Smirnoff it is truly putting Belfast on the map!

The first conference of the day is Belfast born DJ duo and Mcbriar’s one half-sibling Bicep. The conference was focused mainly on their new album and the highs and lows of performing a live tour. They discussed how they wanted their album for the dancefloor, and had produced a lot more weirder tracks that could be as long as 9 minutes but weren’t featured on the album. The single ‘Glue’ was the oldest of the tracks having been 4 years in the making, heavily influenced by Aphex Twin’s style. The duo reveals a funny story behind the naming of the track ‘Glue’ mentioning their manager saying the phrase ‘Why don’t you just find a name that’s STICKS?’ All jokes aside, the opening talk ends with them discussing 2019 will be more featured on Bicep’s own label and more Djing instead of live performance.

Kink was one of the next featured conference speakers, the Bulgarian native who played the main stage was to talk about the timeline of his career. Every one of his sets is a surprise, imperfection is the key to his performance and surprising his audience is everything to him. This techno auteur throughout the talk was very humble about his career, not ever praising himself without any sort of classical training. His first set was with 2002’s version of Ableton on an old pc computer, it was being filmed live and his equipment wasn’t working so he moved the mouse around not knowing what else to do until the techno tv station caught him out live on air! Communism was rife in Bulgaria until 1989 after that Kink explained he was introduced to raves in 1993 and 1994 after the crash of communism.

After being introduced to some of Bulgaria’s biggest names through these party scenes he started a golden career, sell out venues whenever he plays a secretive one-off show in one of Sofia’s smaller venues or their man club Metropolis. Kink has a close affinity with his family, his studio was still in his childhood bedroom only until recently. Just show’s DJ stardom just doesn’t beat family!

The main speaker of the day Larry Heard arrived in the way a majestic messiah enters the room. The conference room filled quicker than the click of a flashlight. The Chicago house legend Larry heard spent his birthday (the day before AVA) in Belfast, his work consumed the need to celebrate his birthday as the musician still is as busy as ever. He had been on break for the last four years of global traveling, sheltered in his small studio space in the love of his life Memphis to mix and start creating his new and long-awaited album ‘Cerebral Hemispheres’.

He has lived in Memphis for over 20 years even though his close ties within Chicago. It is his place to chill and has strong ties with music since being the home of Elvis Presley. Music was in the air in Memphis as he explained it, not many people were invited into his studio except for the artists that were to be featured on his album such as Ed Finney. Heard started off playing drums in a band before making it big as an iconic DJ. )Drums have always been a passion of his as once notably stating he could have played drums for Earth, Wind, and Fire. When signed to MCA Records in the 90’s he learned a lot about bigger record labels. The term underground was used a lot Heard explains but having our music above ground as well is essential to having the well-rounded enjoyment of it.

Heard’s music taste was cultivated a lot in his household, his family’s taste included anything from disco to blues to rock. His family literally had to fight over their records. The 707 machine he talks of fondly describing it was a new piece of equipment to play at the time, if you’re a born musician you can learn to improvise, especially he felt with the 707. He never used a 303 to make his acid tracks. As Heard’s conference descends onto the Q and A I ask the question of ‘What is the difference between the type of crowd you would get today compared to back in the 80s or 90s?’ He answered without pointing to harshly on any generation by saying, ‘’doesn’t matter what generation it is, the crazier the dancer’s the more I enjoy my performance’’!

With our minds fully engulfed with the knowledge of our fellow music teachers and disciple at the conference the Friday of AVA has already fully commenced. The new venue seems foreign to me, but impressive in sound quality and scale. The first stage we approached was The Boiler Room and unsurprisingly had the same quality crowd. I love how music can bring people of all quality and status in life together to enjoy together, and I think by Boiler Room allowing people without an RSVP ticket was the best decision they made. It made people more grateful and appreciate that they weren’t any barriers to enjoy such an event as a Boiler Room. The two acts who appeared on Saturday were Job Jobse and Mano Le Tough. Both DJ’s differed in style, none the less made the crowd end up bounce on top of the foot-high sound system in enjoyment and lure back the Boiler room’s crazy Irish man from last year that went viral!

We could hear the boom of the kick drum to a hard techno set in the distance and instantly thought this is what is calling us, we need to go and feel part of our 160bpm coven! The Smirnoff stage was lit in red, moody lighting to fit the atmosphere. Welcomed to the stage was an array of dark techno talent spanning from Myler to Ossian to Stephanie Sykes. The cutthroat sets were enough to put us in steadfast for the evening and was the exact energy boost we needed!

Two of our most anticipated DJ’s to see perform were Rodhad and Helena Hauff at The Smirnoff Stage. Rodhad always creates an enchanting atmosphere with his techno masterclass. Hauff always, and I mean always, delivers. Every time I see her perform it is done so effortlessly and with such grace and style. Some of the bangers she included in her set were Ian Void – The Rascal (Chris McCormack Remix) and Neil Landstrumm Dave Tarrida – Morocco [ROD09].

Saturday has arrived and everyone’s feeling the beauty and intensity of the day before. The number of troopers braving what it seemed like a night of havoc descending from the Friday to the next day made me chuckle and smile at the same time. The Boiler Room featured the likes of Midland, Nez, and Sunil Sharpe. By far my favourite part of the day had to be Sunil Sharpe’s set! Absolutely incredible! He made the Irish techno music scene and DSNT record label proud. After his abrasive, yielding and politically charged techno set, the crowd applauded ‘One more tune’ from which he satisfied the demands of the audience and sent everyone into a frenzy of dance.

The main stage was sought out by headliner after the amazing headliner. Mall Grab stole people’s hearts and gave them the realization that not only do his talents lie in lo-fi house, but his skills in applying techno and ambient tracks to his set are undeniable. One of the memories that stuck to me during the set was him playing two of many of my favourite tracks Schwefelgelb – Es zieht mich and Dj Seinfeld Sakura. He was closely followed by legendary Detroit legend Robert Hood along with daughter Melody to make up the duo of Floorplan. Floor plan spun a fair few classics, both his own and from the times but nicely brought in a few remixes of old tunes and new to make things a bit fresher – and playing his set to such a big crowd gave it a very special feeling that everyone was sharing this old legend together. Dvs1 played an interesting set – solid techno there but geared towards a house crowd, ie made his drops more gradual and his set felt lighter than his usual game – but the energy remained because it was such a massive crowd and the energy in the crowd was crazy – arguably even crazier than some of the few proper techno nights he probably plays to.

Overall, AVA has and still will always be my favourite festival. To anyone who hasn’t been before no words need explaining on how truly wonderful it is. This is Northern Ireland’s prime event for immersing electronic music into your body and soul!