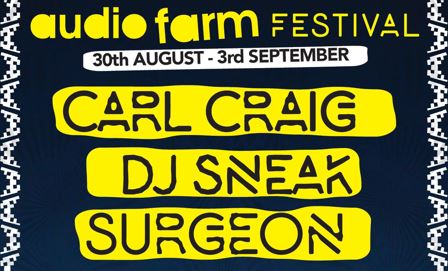 Ah what a blissful four days! Audio Farm (One Tribe) has made an impact on the northern events cycle in the past decade or so for putting on exceptional events in Manchester and further, such places include Hidden and Whitworth Street. The creators decided to expand into a festival and the possibilities were endless. For the last couple of years, their vivid imagination of presenting exceptional electronic music acts combined with a safe space for people of all ages blossomed into something very beautiful and ethical. The aim was to escape from the corporative haze of festival’s that we see today and create a non-profit festival, all funds raised to go towards a brilliant charity called The Green Paw Project. This charity aims to raise £30,000 for an animal sanctuary in Malawi.

The location this year changed to the beautiful countryside of Kidderminster. Its vast fields full of sheep and trees made it the ideal setting for friends and family members to create a place for their own ‘tribe’. Along with the beautiful setting it came with many twists and turns, the kind you would find in Alice In Wonderland. Vintage clothes stalls and vegan only food stands, every tent with a different aspect to it. Before the first night of acts one of my highlights of the festival was meeting my tent neighbours (coincidently from the same area as myself) hold a shaman spiritual ceremony with lots of screaming and dancing around in circles. DJ Sneak played a scorching hot set infused with his usual style of Chicago flavoured gangster house and funky beats. After a while of the scene he surely made a comeback. Paul Woolford followed soon after and gave a very ambient house set, the visuals and the music came hand and hand giving off a euphoric atmosphere.

One of the things I loved most about the festival was that it introduced me to new music I would never have intended to open my mind and ears to. Two distinctive bands that ensemble what I am saying is Mobius Loop and Age of Glass. As my music repertoire mainly abides in electronic music, both enraptured my musical spirit in different ways. Mobius Loop was a husband wife duo of piano, violin and vocals. The songs were aimed towards global and political matters with a hearty, folky beat. A theme of their unique songs that the crowd went wild for was their pro marijuana and hemp anthems. Two naked men stood in front of me danced to the folky rhythm, giving off the summer of ’69 vibes. Age of Glass was like nothing I ever seen in my life. A Sci Fi styled funky dubstep group which had two women dressed as astronauts moving around on stage with space guns.

After getting a beat massage (a guy who massages you to the beat of the track of your choice), a long-awaited performance from Carl Craig and Surgeon. I swayed on the podium along with my other, colourful fellow party goers and the crowd literally went nuts! Three people barely balancing on a cow statue wearing fancy dress seemed enthralled by the arrival of the Detroit legend. His performance contained just the right amount of happiness and soul for the audience to enjoy. Detroit techno, electro, soulful house. He even played classics ‘Good Life’ and ‘She’s Homeless’. Surgeon came after and blasted the Function one speakers with that juicy kickdrum and fast bpm I really do live for! Undoubtfully one of the the most skilled and dynamic DJs ever, he gave a very heavy set that shattered every joint in my body.

The night sky’s were filled with glittering stars and the festival around a massive festival campfire along with highly talented fire performances. The best company imaginable, along with moments of pure love for everyone involved with this spectacular event. It may possibly be the last Audio Farm festival ever as told by a couple, it saddens me as it’s a festival with a charitable cause and has created a family. The music was sublime, but the sense of love and compassion made it by far one of the best festivals I have ever been to. First class!