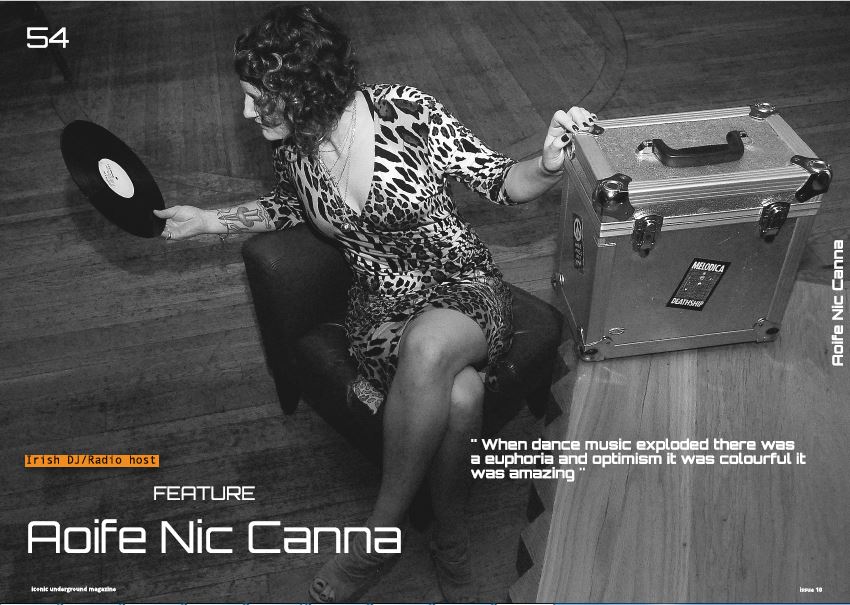 Aoife Nic Canna is a very well respected iconic figure in the Irish dance music community, whose considerable talent, inspiration and presence has delivered the beats to her many tribes consistently for over 25 years, she is still spinning her vinyl as regular today…

We caught up with her over a pint to discuss her impact on the Irish scene..

Mike Mannix: Thank you Aoife its great to catch up again and continue our conversation…so let’s touch on your original inspirations and influences growing up.

Aoife Mic Canna: Hey Mike as you know I was an 80s child so a lot of my early interest in music was from bands like Soft Cell, Cocteau Twins, Eurythmics and The Smiths Etc. It was the late 80s when I got introduced to Acid house in Sir Henry’s in Cork, where I used to go every Thursday! Like most Irish people in the late 80s, I eventually had to move to London for a while and I came back to Ireland in ‘91 and then went over to Edinburgh which really changed everything for me. Whilst I was there I had my first real rave experience which was amazing and when I came back to Ireland I had to do something about this to import that experience back here.

Anyway long before I became a DJ I was collecting vinyl I was a serious crate digger, I bought records in London, Dublin, Cork, and Limerick I had a great collection of tunes but didn’t know how to DJ. When I moved back to Dublin in 1992 I then joined a group called ‘The Horny Organ Tribe’ who used to put on nights in various venues around the City, I knew Derek Purple before he started that group because I used to hang out and then he introduced me to Tony Walsh who actually gave me his decks to practice on until I could afford my own so I’m eternally indebted to him for that. My first real DJing gig it was in Fibber Magee’s in the City Centre and it just went from there and it kind of exploded for me I was very lucky.

MM: So then you had to learn to beat match then?

A: Haha yeah I feel sorry for the club and the punters in the early days that had to endure my lack of mixing skills at the very start! My friend Derek said ‘’look you’ve got great records but you really need to learn how to mix’’ and he was good enough to teach me how to mix properly which was the best thing that could have happened to me! Thanks, Derek. Eventually, I got my hands on my own decks and I went from there. When I’m actually teaching my DJ workshops

MM: What are your thoughts on that era looking back?

A: In the early days really we were really naive and didn’t realise how important the scene was but we knew that we liked it we knew it was exciting we knew it was dynamic and we didn’t really have anything like that before that and we certainly didn’t have a club drug culture. At the start, as everybody knows it was very much underground a very small community of people that were surrounded by a very mediocre nightclub scene, and the dance scene was like this little secret that was happening.

It was kind of funny back then when you saw people coming into clubs and dropping pills for the first time it was all new! I think a lot of people thought maybe it would be just another musical fad that came and went, and here I am still playing records 25 years later.

The records that I have now are like a time capsule from that era as I really did try to get my hands on some amazing records and obviously that time pre-internet you really had to dig deep to find those special tunes. One of the guys in Limerick had an amazing collection of records and I remember seeing a ‘Strictly Rhythm’ record for the first time ‘Lil Louis French Kiss’ I really wanted to get my hands on these tunes likes ‘Strings of life’ but even just trying to get your hands on these was potluck, it was very difficult to find the really good records so if you knew anybody that was going away to the UK or to America you’d give them a list of Records that you wanted.

MM: What was so great about the music and how did it change things?

A: Well I remember in the 80s a lot of the music was all very sad and reflected the society and what was happening at that time, it was really bleak and depressing, mass immigration, no jobs, and Thatcher etc, so the lyrics and music highlighted that era.

you had you some of these amazing amazing black singers singing about positive things, the future’s bright, there was an optimism and that things can only get better. So yeah the music was in stark contrast to the 80s and upbeat.

As a direct result of all that optimism the fashion then reflected that vibrancy and for me personally, I used to wear a lot of black for years and years and then all of a sudden my head had bright orange dreadlocks I wore really bright clothes it was how I was feeling on the inside.

Then on top of that then you had ecstasy which changed everything. First time I took a pill I remember thinking this can’t be bad for you feeling this good! I remember reading an article in face magazine called the ‘agony and the Ecstasy’ where is outlined that pills could be really dangerous but we were not concerned with that because to us we knew we were drinking our water and probably eating fruits and all the rest and

we didn’t see any danger or any complication with taking pills whatsoever we weren’t educated at all.

A: Well the corporate world had absolutely no interest in this it was so underground there was no money and the only venues that we could get were places that others didn’t want. I was a promoter before I started DJing so part of that job was to do the place up to make it look somewhat presentable for the gig. I did my best to try and make it look really good because a lot of times it would have been a scruffy little venue or shit function room. I’d have to use drapes or curtains to try and cover up the ugliness of it and that’s one thing that’s Tony Walsh was really good at he was very creative. Much later on when we started to get the plush venues as we realised that we didn’t have to do the place up which was nice because the venues were being designed for this type of scene.

MM: Yeah can you tell us then about the documentary ‘Folklore On The Dancefloor’ that you wrote and produced?

A: Yeah sure no problem, back then I was working in radio for many years I did an 8-year stint on Jazz FM and also POWER FM which was the biggest underground radio station at the time in Dublin with my show the ‘Urban Soul Show’. When POWER FM went digital I was a little bit disillusioned because

so I took a break around that time then and went into community Radio were I had an Irish arts programme and a music program called Club Cheol where I tried to highlight homegrown music being produced in Dublin and Ireland.

At the time at the time I’d been assisting on some other documentaries with editing etc and heard that a documentary about the Northside dance music scene was going to be made, but I thought why not the whole Dublin scene so I decided to make my own documentary. I got speaking to my mates who were writing books on the dance music scene and they said ‘’you’ve got a lot of experience about the scene around Ireland’’ and that’s how the idea came up. I approached Near FM to say that I wanted to do this so eventually I went through the application process to get funding and I got the funding I spent about a year prepping and then I got cracking. I had to spend ages getting people into the studio and then I spent a very long time editing those recordings it took me about two years to get it to a six-part half an hour an episode documentary.

Even then when I got all the editing done I still then had to sort out the music which I wanted all Homegrown artists, it was a lot of work and I did my best to document all the tribes, and it came out in 2013 so at this stage it’s already dated but at least it’s archived and it represents a time in the scene.

A: I was a Dub that lived in Limerick and used to go raving in Galway and Cork