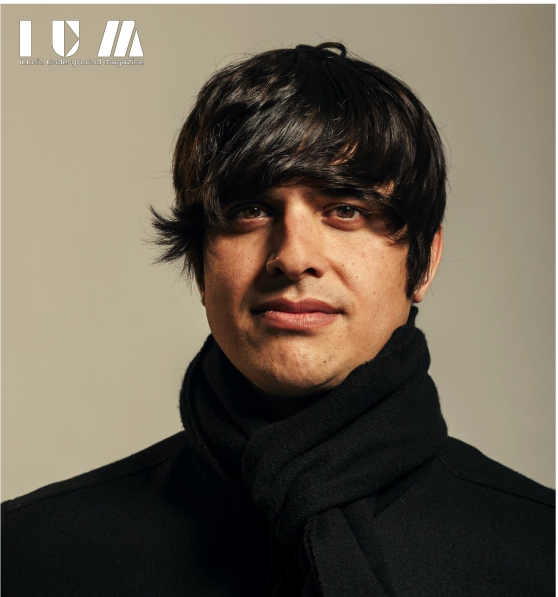 Arveene Juthan has well over a decade of experience in the Irish music industry and is at the top of the game behind the decks in Dublin clubs or hosting events around the world, Arveene is well-liked and respected by those who have worked with or listened to him play, we caught up with him recently for a natter.

Mike Mannix: Nice one Arveene it’s great to finally get to speak with you for iconic underground. Give us some background on your early social and musical influences in the family home in Rathfarnham Dublin, like Bollywood and Irish trad and how they inspired you?

Arveene: My dad was born in South Africa and moved to Ireland during apartheid, so I grew up watching and listening to a lot of Indian films and music. Anytime we went back to South Africa because of Apartheid it was like being in India as all the different communities stuck together. My mum comes from Westmeath, her family are very much the singing Irish, everyone sings at family get together, my grandparents, cousins, everybody sings. My mum sang in a country and western band and did a few gigs around Ireland with her brother when they were younger.

MM: Nice one, so from early inspiration’s to your early musical experience in Eamon Doran’s in Dublin’s Temple Bar, gave you the itch to mix to get on the decks, discuss?

A: Dave Hales brought me down to Eamon Dorans to see a couple of DJs, one was Francois Pittion and the other Iain McCready from Belfast. The place was buzzing, it was incredible, I was only 15 at the time and it was packed full of various nationalities, sexualities, working-class folk and rich kids. Just an electric mixture of raw energy and music.

From there, I started off with one basic turntable bur eventually saved enough money up and got my first proper decks via Mark McCabe, who used to do the sound in my school before he became famous. He was working in a sound hire place and they had a set of old really old Technics and I bought then, they must have been 10 years old when I got them. I worked in a bunch of part-time jobs, a petrol station, in Arnotts Department Stores and a Psychiatric hospital just to get the cash in and save for them. 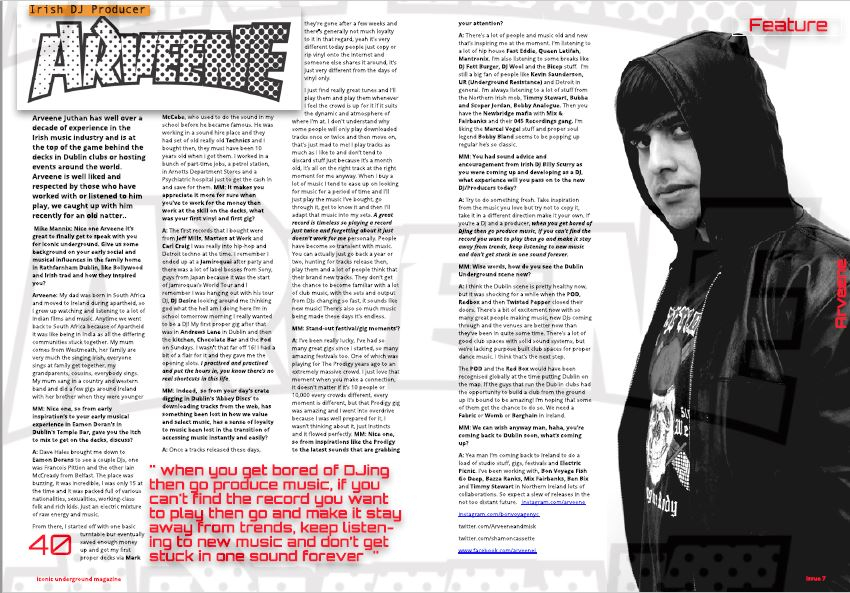 MM: It makes you appreciate it more for sure when you’ve to work for the money then work at the skill on the decks, what was your first vinyl and first gig?

A: The first records that I bought were from Jeff Mills, Masters at Work and Carl Craig I was really into hip-hop and Detroit techno at the time. I remember I ended up at a Jamiroquai after-party and there was a lot of label bosses from Sony, guys from Japan because it was the start of Jamiroquai’s World Tour and I remember I was hanging out with his tour DJ, DJ Desire looking around me thinking god what the hell am I doing here I’m in school tomorrow morning I really wanted to be a DJ! My first proper gig after that was in Andrews Lane in Dublin and then the kitchen, Chocolate Bar and the Pod on Sundays. I wasn’t that far off 16! I had a bit of a flair for it and they gave me the opening slots.

MM: Indeed,  so from your day’s crate-digging in Dublin’s ‘Abbey Discs’ to downloading tracks from the web, has something been lost in how we value and select music, has a sense of loyalty to music been lost in the transition of accessing music instantly and easily?

A: Once a tracks released these days, they’ve gone after a few weeks and there’s generally not much loyalty to it in that regard, yeah it’s very different today people just copy or rip vinyl onto the Internet and someone else shares it around, it’s just very different from the days of vinyl only.

I just find really great tunes and I’ll play them and play them whenever I feel the crowd is up for it if it suits the dynamic and atmosphere of where I’m at. I don’t understand why some people will only play downloaded tracks once or twice and then move on, that’s just mad to me! I play tracks as much as I like to and don’t tend to discard stuff just because it’s a month old, it’s all on the right track at the right moment for me anyway. When I buy a lot of music I tend to ease up on looking for music for a period of time and I’ll just play the music I’ve bought, go through it, get to know it and then I’ll adapt that music into my sets.

People have become so transient with music. You can actually just go back a year or two, hunting for tracks release then, play them and a lot of people think that their brand new tracks. They don’t get the chance to become familiar with a lot of club music, with the sets and output from DJs changing so fast, it sounds like new music! There’s also so much music being made these days it’s endless.

A: I’ve been really lucky, I’ve had so many great gigs since I started, so many amazing festivals too. One of which was playing for The Prodigy years ago to an extremely massive crowd. I just love that moment when you make a connection, it doesn’t matter if it’s 10 people or 10,000 every crowds different, every moment is different, but that Prodigy gig was amazing and I went into overdrive because I was well prepared for it, I wasn’t thinking about it, just Instincts and it flowed perfectly. 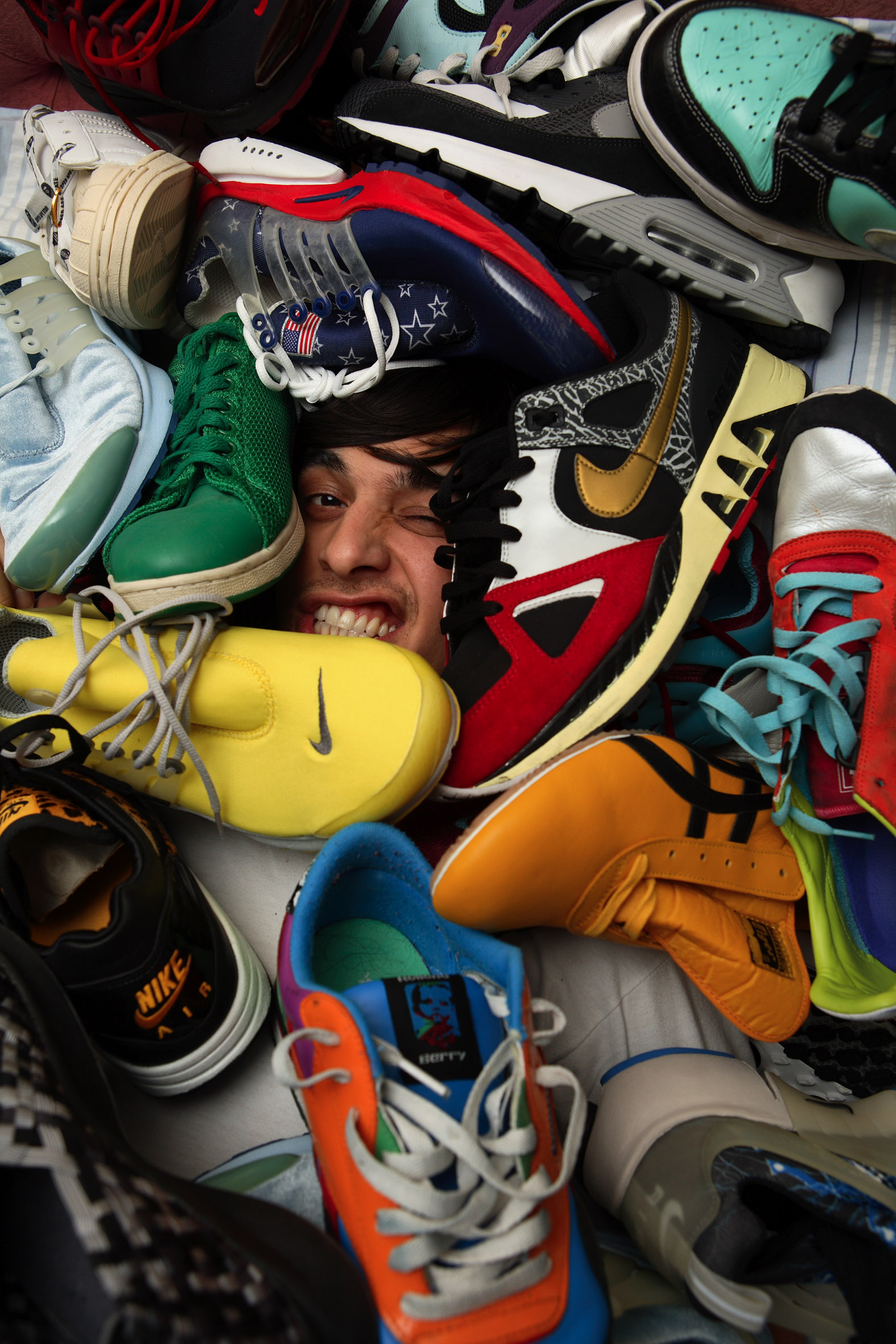 MM: Nice one, so from inspirations like the Prodigy to the latest sounds that are grabbing your attention?

A: There’s a lot of people and music old and new that’s inspiring me at the moment. I’m listening to a lot of Hip-House Fast Eddie, Queen Latifah, Mantronix. I’m also listening to some breaks like DJ Fett Burger, DJ Wool and the Bicep stuff.  I’m still a big fan of people like Kevin Saunderson, UR (Underground Resistance) and Detroit in general. I’m always listening to a lot of stuff from the Northern Irish mob, Timmy Stewart, Bubba and Scoper Jordan, Bobby Analogue. Then you have the Newbridge mafia with Mix & Fairbanks and their 045 Recordings gang. I’m liking the Marcel Vogel stuff and proper soul legend Bobby Bland seems to be popping up regular he’s so classic.

MM: You had sound advice and encouragement from Irish DJ Billy Scurry as you were coming up and developing as a DJ, what experience will you pass on to the new DJ/Producers today?

A: Try to do something fresh. Take inspiration from the music you love but try not to copy it, take it in a different direction make it your own.

If you’re a DJ and a producer, when you get bored of DJing then go produce music, if you can’t find the record you want to play then go and make it stay away from trends, keep listening to new music and don’t get stuck in one sound forever.

MM: Wise words, how do you see the Dublin Underground scene now?

A: I think the Dublin scene is pretty healthy now, but it was shocking for a while when the POD, Redbox and then Twisted Pepper closed their doors. There’s a bit of excitement now with so many great people making music, new DJs coming through and the venues are better now than they’ve been in quite some time. There’s a lot of good club spaces with solid sound systems, but we’re lacking purpose-built club spaces for proper dance music. I think that’s the next step.

The POD and the Red Box would have been recognised globally at the time putting Dublin on the map. If the guys that run the Dublin clubs had the opportunity to build a club from the ground up it’s bound to be amazing! I’m hoping that some of them get the chance to do so. We need a Fabric or Womb or Berghain in Ireland.

MM: We can wish anyway man, haha, you’re coming back to Dublin soon, what’s coming up?

A: Yea man I’m coming back to Ireland to do a load of studio stuff, gigs, festivals and Electric Picnic. I’ve been working with, Bon Voyage Fish Go Deep, Bazza Ranks, Mix Fairbanks, Ben Bix and Timmy Stewart in Northern Ireland lots of collaborations. So expect a slew of releases in the not too distant future.