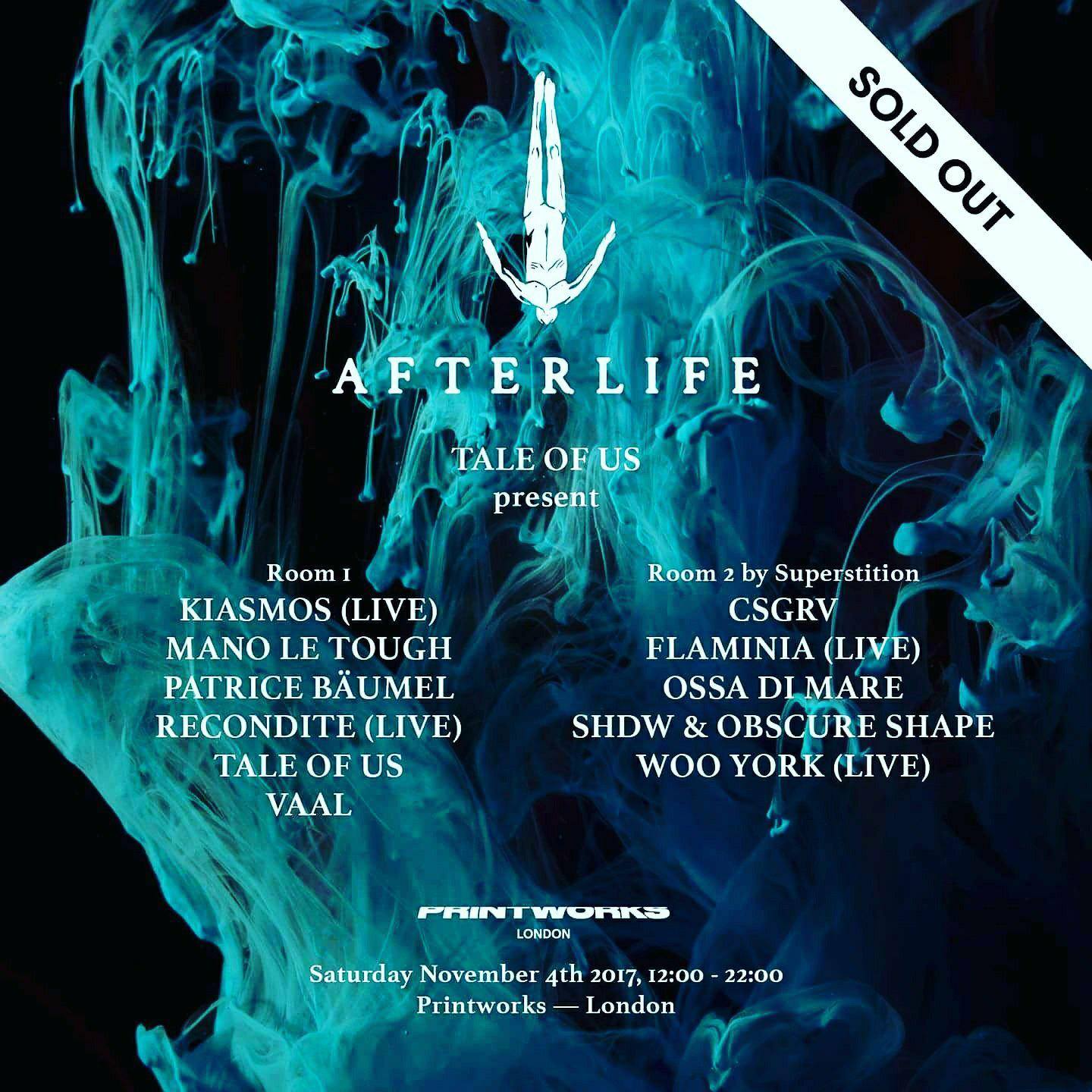 ‘Ubering through Landan we were late, for a very important date’ The party series Afterlife built in little under a year by the mighty ‘Tale of Us’ was returning to London at the awesome ‘Printworks’. I was just as enamoured at experiencing techno in this huge industrial space as I was by the host of amazing artists that lay before us. Comprising of six vast spaces all arranged over multiple levels with a maze of corridors & rooms throughout all retaining the original machinery & industrial features, this sixteen-acre former printing factory with a six thousand capacity was impressive, to say the least.

One initial criticism of this sold out daytime event was the lack of set times.

The set times weren’t posted on the event page at all never mind late. Eventually at 1 pm an hour after the event started a very kind party goer sent a welcomed photo of a poster from the event of the set times into a thread on the event Facebook page.

For a gig of this magnitude, this was very poor form indeed.

A clear plan of action is paramount & the reason we missed the brilliant Patrice Baumel. The set times were also a bit of a shocker, Baumel two til four?? In fairness to the event organisers though with so many savage acts, someone has to go first. One thing was certain, Room One had my name all over it!

‘What a room this was’ A huge industrial space packed to the gills with enthusiastic ravers. Six huge speaker systems aligned both sides of this voluminous space making the resounding bass almost penetrate the being of your soul. A VIP area on a second tier looked over the vast crowd & well the lights! Sharp beams of vibrant colour perfectly in tune with the music, the whole thing was really quite breath-taking.

When we arrived Kiasmos (Live) BAFTA-winning composer O’lafur Arnalds & electro-pop producer Janus Rasmussen were playing some remarkably hard techno in contrast to what I believed Kiasmos to be about. Normally known for an exploration between a unique blend of acoustic piano & synth-heavy electro-pop, they seemed to have upped the ante & rightly so in keeping with both the event & the surroundings. The roof was lifting, the precedent had been set & it was only 5 pm.

Mano Le Tough was next, a fellow Irishman & renowned electronic producer he runs the record label ‘Maeve’ alongside the Drifter & Baikal. In fairness, he is known for nuanced sometimes downtempo house music & in retrospect, I believe his position in this line-up was all wrong. I felt we were taken down a notch with this set. Albeit in the main captivating it failed to keep my attention in parts after the pure power of Kiasmos. It was time for a cocktail & a chill in the outside area.

There really was an easy flow around this venue, a one-way system was in operation. There was only one deep at the bar at any given time & a short queue for the toilets, quite surprising for the number of people in attendance. The outside area was also spacious an array of comfortably seated areas, perfect for a drink, chat & a bit of fresh air. Refreshed & full of enthusiasm we returned to Room One for Recondite (Live) to be closely followed by ‘Tale of Us’, I wasn’t moving for the foreseeable!

Recondite’s set was both full of depth & drama, one of the most revered live techno acts on the planet we were not disappointed. Spine-tingling build ups with eerie deep, dark, powerful sounds. You almost felt like you were in some sort of a sci-fi movie. The mothership was about to take flight & the wee feet were danced cleanly off me. How could we possibly meet another life-force?

Here it was the mighty ‘Tale of Us’ & what a tale this was, the unique Berlin-based soundscape project

Perhaps the best techno I have ever heard, a journey of all journeys. This set for me pushed poetic & emotional boundaries. Totally atmospheric mesmerizing soundscapes & lush rhythm’s combined with compelling deep techno bassline’s, I was in heaven! To experience this with a crowd of this size, in a venue as impressive as this, really was an experience & a half.

A sea of hands in the air & shouts of exaltation, what more could anyone ask!

All in all this day was totally amazing with only a few minor criticisms. I really wish Mano le Tough & Patrice Baumel had swapped position in the line-up. By all accounts Patrice’s set was immense, apparently, he ended with Sasha’s ‘Xpander’ which would have been powerful in this huge industrial setting. Maybe sour grapes on my part & will maybe teach me to be on time in future. Another minor criticism was the break between acts, I’ve never seen this before, a bit disconcerting & disrupted the flow of the day somewhat. I was sure this must be due to technical issues but was later informed this is always the case between acts at Printworks.

We left on a complete high what an experience & what a day, it really does not surprise me that ‘Afterlife’ has gone global. After a brief wait on an Uber at 10 pm, the night was but young! My final thought, if you ever get the chance to experience techno at ‘Printworks’ just do it! You will not be disappointed.