The Prophet 5 was the world’s first fully programmable polyphonic synthesizer.

A first in its day. In spite of its technological achievements, it was the sound of the machine which resulted in its success. Many musicians are unaware of the technology under the hood but appreciate the deeply musical tones created by the machine. The inclusion of memory banks was of huge appeal to synthesists at the time, as this again was a first in a synthesizer at the time of its release. 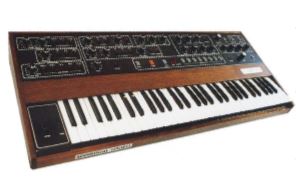 Musicians were required to reset every parameter they’d previously adjusted to create another sound in order to recall a patch, whereas now they simply needed the press of a button. This extremely smart move caught the attention of the worlds biggest synthesizer manufacturers and help establish Smith as a world leader in synthesizer technology.

The founder of Sequential Circuits Dave Smith is the stuff of legend amongst synthesizer enthusiasts, as he is often referred to as “The Father of MIDI” – MIDI being the “language” synthesizers use to talk to one another, for his role in the development of MIDI in 198. Although he didn’t single-handedly create the final version of the first iteration of MIDI, it was due to his ground-breaking technological innovations the protocol came into being. Following the submission of a paper he presented in 1981, the “keyboard language” MIDI was developed into is now used by virtually every keyboard manufacturer in the world today.

Before taking the world by storm with his synth-genuity, he was a performing musician playing in bands while at school and college. He later gained an Electrical Engineering and Computer Science degree from the University of California at Berkeley in 1971. At this time he says there was very little demand for engineers, even in Silicon Valley. He had a “horrible job at [an]aerospace” company.

Fun is extremely important when playing with a synth! Menus and typing and clicking and so on, even using a control surface is not ideal when the knobs’ functions change or don’t have logical placement relative to the instrument they’re controlling. It just doesn’t feel or act like a musical instrument

His foray in music and technology began in 1971 when he wrote a computer programme that printed composed music onto a plotter, which was very primitive according to Smith himself.

His life was about to change when a friend informed him about the existence of the Moog Model D which he bought immediately. One of the 1st 300 ever made. He says in an interview with Keyboard magazine, “One day a friend told me he saw a synthesizer in a small local music store; it was a Minimoog, and this was in 1972. I immediately got a loan from the Lockheed credit union and bought it—it seemed like a perfect combination of my musical and technical interests. And, yes, I still have it.”

He made his first device in 1974. It was a 16×3 sequencer that worked with Moogs and Arps. He would call this the Model 600. He hoped there was be sufficient demand for this device to make them commercially available he formed the Sequential Circuits company and advertised in Rolling Stone magazine. A name that was to be associated with many of his greatest creations. Unfortunately for Dave, he only sold three of the units.

In 1975 he made a digital version called the Model 800 and the Model 700 sound programmer came a year later. It could store and recall parameters for analogue synths and was an early form of patch memory banks.

Between 1975 and 1977 he was still working full time with microprocessors which were still relatively new at the time.

From Dave Rossum E-MU, he discovered that a new synth chipset was to be released by Solid State Music. He had the idea that using the synth chip and a microprocessor he would create a polyphonic synthesizer. Initially he didn’t pursue the idea, convinced Moog and Arps must already be developing such a machine. After some had passed, the realisation that they weren’t pushed him to leave his job and he began working on the design.

A Moog employer called John Bowen joined Smith to help develop his products after Bowen started to use the programmer himself. Then Bob Fairhurst joined the company to help manage business affairs. Together they began planning their first synth. Called the Model 1000. 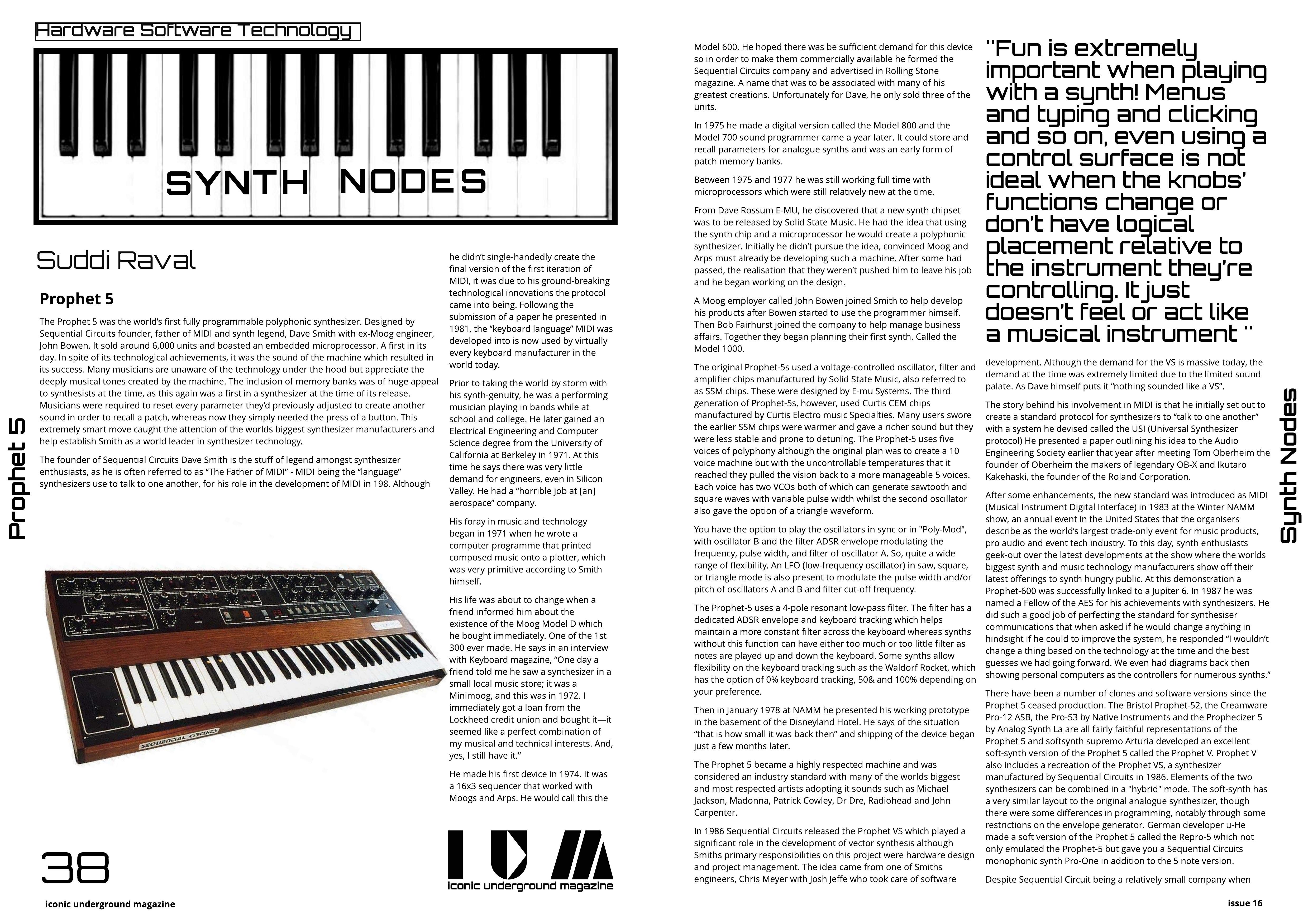 The original Prophet-5s used a voltage-controlled oscillator, filter, and amplifier chips manufactured by Solid State Music, also referred to as SSM chips. These were designed by E-mu Systems. The third generation of Prophet-5s, however, used Curtis CEM chips manufactured by Curtis Electro music Specialties. Many users swore the earlier SSM chips were warmer and gave a richer sound but they were less stable and prone to detuning. The Prophet-5 uses five voices of polyphony although the original plan was to create a 10 voice machine but with the uncontrollable temperatures that it reached they pulled the vision back to a more manageable 5 voices. Each voice has two VCOs both of which can generate sawtooth and square waves with variable pulse width whilst the second oscillator also gave the option of a triangle waveform.

You have the option to play the oscillators in sync or “Poly-Mod”, with oscillator B and the filter ADSR envelope modulating the frequency, pulse width, and filter of oscillator A. So, quite a wide range of flexibility. An LFO (low-frequency oscillator) in saw, square, or triangle mode is also present to modulate the pulse width and/or pitch of oscillators A and B and filter cut-off frequency.

The Prophet-5 uses a 4-pole resonant low-pass filter. The filter has a dedicated ADSR envelope and keyboard tracking which helps maintain a more constant filter across the keyboard whereas synths without this function can have either too much or too little filter as notes are played up and down the keyboard. Some synths allow flexibility on the keyboard tracking such as the Waldorf Rocket, which has the option of 0% keyboard tracking, 50& and 100% depending on your preference.

Then in January 1978 at NAMM he presented his working prototype in the basement of the Disneyland Hotel. He says of the situation “that is how small it was back then” and shipping of the device began just a few months later.

The Prophet 5 became a highly respected machine and was considered an industry standard with many of the world’s biggest and most respected artists adopting it sounds such as Michael Jackson, Madonna, Patrick Cowley, Dr. Dre, Radiohead, and John Carpenter.

In 1986 Sequential Circuits released the Prophet VS which played a significant role in the development of vector synthesis although Smiths’ primary responsibilities on this project were hardware design and project management. The idea came from one of Smiths’ engineers, Chris Meyer with Josh Jeffe who took care of software development. Although the demand for the VS is massive today, the demand at the time was extremely limited due to the limited sound palate. As Dave himself puts it “nothing sounded like a VS”.

After some enhancements, the new standard was introduced as MIDI (Musical Instrument Digital Interface) in 1983 at the Winter NAMM show, an annual event in the United States that the organisers describe as the world’s largest trade-only event for music products, pro audio and event tech industry. To this day, synth enthusiasts geek-out over the latest developments at the show where the world’s biggest synth and music technology manufacturers show off their latest offerings to synth hungry public.

At this demonstration a Prophet-600 was successfully linked to a Jupiter 6. In 1987 he was named a Fellow of the AES for his achievements with synthesizers. He did such a good job of perfecting the standard for synthesiser communications that when asked if he would change anything in hindsight if he could to improve the system, he responded “I wouldn’t change a thing based on the technology at the time and the best guesses we had going forward. We even had diagrams back then showing personal computers as the controllers for numerous synths.”

Despite Sequential Circuit being a relatively small company when compared to some of its rivals such as Yamaha, Korg, and Roland, who in comparison are giants of synthesiser technology, the Prophet 5 became a market leader and many considered it be the industry standard. This truly became the story of the underdog winning against the odds. An almost impossible achievement which is purely down to Smith’s ingenuity and the groundbreaking vision of the people he worked with.

After Dave Smith stopped working on Sequential Circuits synthesizers he became president of DSD an R&D division of Yamaha, where he worked on “physical modeling” synthesis and software synth technology.  In 1989 he moved to Korg in their R&D department in California where he helped develop the Wavestation and other technologies. Later Smith would become president of Seers Systems where he would develop the world’s first software-based synthesizer on a PC. Commissioned by Intel, a keynote speech followed in 1994 at the Comdex computer trade show where the synth was demonstrated by Andy Grove. Following a licensed to Creative Labs in 1996, the second generation of this software synthesizer sold over 10 million copies for it was responsible for 32 of the 64 voices in Creative Labs’ AWE 64 line of soundcards.

In 1997 he went onto the 3rd generation of software synths which were renamed Reality. Smith was the programmer for the low level optimized floating-point code. Reality won the 1998 Editors’ Choice Award and got the highest rating possible in Electronic Musician Magazine.

In 2002 when he announced he was to launch Dave Smith instruments, the news was received by synthesizer enthusiasts with much anticipation.

His first Dave Smith product was the Evolver in 2002. When asked about the synth by Keyboard magazine in 2010, he said “It was simple. Reality did a lot of stuff, but I realized I was never playing with it. I always like to play around with my instruments, so I had to ask myself why? I realized how silly it is to have a computer screen—QWERTY keyboard and mouse on one side, MIDI keyboard on the other—and somehow try to have fun. Fun is extremely important when playing with a synth! Menus and typing and clicking and so on, even using a control surface is not ideal when the knobs’ functions change or don’t have logical placement relative to the instrument they’re controlling. It just doesn’t feel or act like a musical instrument.

At the same time, I was helping Roger Linn on his Adrenaline, and I realized how much I liked hardware. It’s fun. It has knobs and switches. And, unlike soft synths, it’ll still work in 10 years. Soft synths have to be ported forever to new operating systems, platforms, and endless versions. I like designing an instrument once, then moving on, not working on the same thing forever. The Evolver first shipped in 2002; we’re still selling it eight years later, and there’s still nothing that can touch it! The concept was to combine real analogue electronics with highly integrated digital circuits—the best of both worlds, from pure analogue warmth to digital crunch.”

In 2015 he regained the rights to the name Prophet once again when he released the Prophet 6 much to the delight of synthesizer enthusiasts the world over.  He has since released a number of extremely powerful and highly coveted synthesizers. He is a unique and incredibly visionary individual who continues to inspire both the synthesiser community and the biggest synthesizer manufacturers in the world.