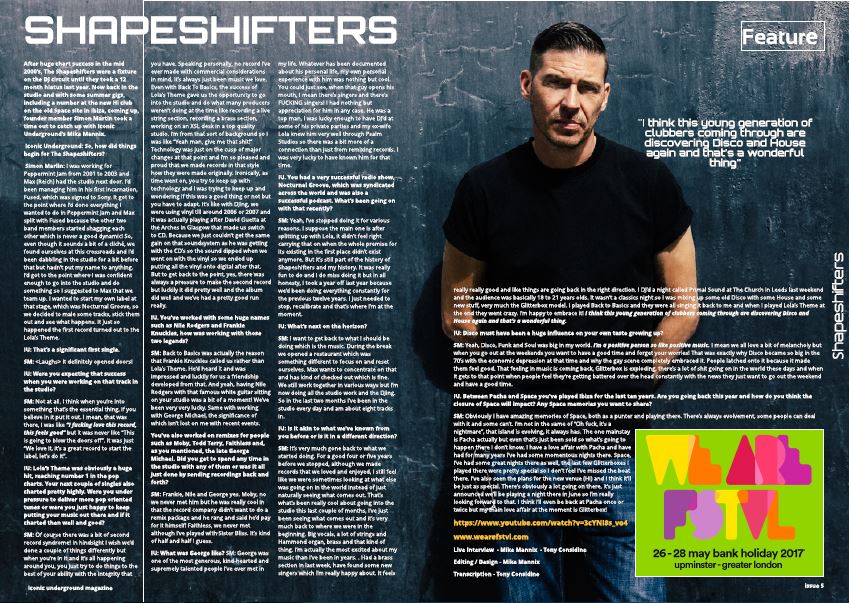 Simon Marlin: Cheers Mike, I was working for Peppermint Jam from 2001 to 2003 and Max (Reich) had the studio next door. I’d been managing him in his first incarnation, Fused, which was signed to Sony. It got to the point where I’d done everything I wanted to do in Peppermint Jam and Max split with Fused because the other two band members started shagging each other which is never a good dynamic! So, even though it sounds a bit of a cliché, we found ourselves at this crossroads and I’d been dabbling in the studio for a bit before that but hadn’t put my name to anything. I’d got to the point where I was confident enough to go into the studio and do something so I suggested to Max that we team up. I wanted to start my own label at that stage, which was Nocturnal Groove, so we decided to make some tracks, stick them out and see what happens. It just so happened the first record turned out to Lola’s Theme.

IU: Were you expecting that success when you were working on that track in the studio?

SM: Not at all. I think when you’re into something that’s the essential thing if you believe in it put it out. I mean, that was there, I was like

“I fucking love this record, this feels good”

but it was never like “This is going to blow the doors off”. It was just “We love it, it’s a great record to start the label, let’s do it”.

IU: Lola’s Theme was obviously a huge hit, reaching number 1 on the pop charts. Your next couple of singles also charted pretty highly. Were you under pressure to deliver more pop oriented tunes or were you just happy to keep putting your music out there and if it charted then well and good?

SM: Of course there was a bit of second record syndrome! In hindsight, I wish we’d done a couple of things differently but when you’re in it and it’s all happening around you, you just try to do things to the best of your ability with the integrity that you have. Speaking personally, no record I’ve ever made with commercial considerations in mind, it’s always just been music we love. Even with Back To Basics, the success of Lola’s Theme gave us the opportunity to go into the studio and do what many producers weren’t doing at the time of recording a live string section, recording a brass section, working on an XSL desk in a top quality studio. I’m from that sort of background so I was like “Yeah man, give me that shit!”

The technology was just on the cusp of major changes at that point and I’m so pleased and proud that we made records in that style how they were made originally. Ironically, as time went on, you try to keep up with technology and I was trying to keep up and wondering if this was a good thing or not but you have to adapt. It’s like with DJing,

We were using vinyl till around 2006 or 2007 and it was actually playing after David Guetta at the Arches in Glasgow that made us switch to CD. Because we just couldn’t get the same gain on that sound system as he was getting with the CD’s so the sound dipped when we went on with the vinyl

so we ended up putting all the vinyl onto digital after that. But to get back to the point, yes, there was always a pressure to make the second record but luckily it did pretty well and the album did well and we’ve had a pretty good run really

You’ve worked with some huge names such as Nile Rodgers and Frankie Knuckles, how was working with those two legends?

SM: Back to Basics was actually the reason that Frankie Knuckles called us rather than Lola’s Theme. He’d heard it and was impressed and luckily for us, a friendship developed from that. And yeah, having Nile Rodgers with that famous white guitar sitting on your studio was a bit of a moment! We’ve been very very lucky. Same with working with George Michael, the significance of which isn’t lost on me with recent events.

IU: You’ve also worked on remixes for people such as Moby, Todd Terry, Faithless and, as you mentioned, the late George Michael. Did you get to spend any time in the studio with any of them or was it all just done by sending recordings back and forth?

SM: Frankie, Nile, and George yes. Moby, no we never met him but he was really cool in that the record company didn’t want to do a remix package and he rang and said he’d pay for it himself! Faithless, we never met although I’ve played with Sister Bliss. It’s kind of half and a half I guess.

George was one of the most generous, kind-hearted and supremely talented people I’ve ever met in my life.

Whatever has been documented about his personal life, my own personal experience with him was nothing but cool. You could just see, when that guy opens his mouth, I mean

There are singers and there are FUCKING singers!

I had nothing but appreciation for him in any case. He was a top man, I was lucky enough to have DJ’ed at some of his private parties and my ex-wife Lola knew him very well through Psalm Studios so there was a bit more of a connection than just from remixing records. I was very lucky to have known him for that time.

IU: You had a very successful radio show, Nocturnal Groove, which was syndicated across the world and was also a successful podcast. What’s been going on with that recently?

SM: Yeah, I’ve stopped doing it for various reasons. I suppose the main one is after splitting up with Lola, it didn’t feel right carrying that on when the whole premise for its existing in the first place didn’t exist anymore. But it’s still part of the history of Shapeshifters and my history. It was really fun to do and I do miss doing it but in all honesty, I took a year off last year because we’d been doing everything constantly for the previous twelve years. I just needed to stop, recalibrate and that’s where I’m at the moment.

IU: What’s next on the horizon?

SM: I want to get back to what I should be doing which is the music. During the break, we opened a restaurant which was something different to focus on and reset ourselves. Max wants to concentrate on that and has kind of checked out which is fine. We still work together in various ways but I’m now doing all the studio work and the DJing. So in the last two months, I’ve been in the studio every day and am about eight tracks in.

IU: Is it akin to what we’ve known for you before or is it in a different direction?

SM: It’s very much gone back to what we started doing. For a good four or five years before we stopped, although we made records that we loved and enjoyed, I still feel like we were sometimes looking at what else was going on in the world instead of just naturally seeing what comes out. That’s what’s been really cool about going into the studio this last couple of months, I’ve just been seeing what comes out and it’s very much back to where we were in the beginning.

Big vocals, a lot of strings and Hammond organ, brass and that kind of thing. I’m actually the most excited about my music than I’ve been in years. Had a brass section in last week, have found some new singers which I’m really happy about. It feels really really good and likes things are going back in the right direction. I DJ’d a night called Primal Sound at The Church in Leeds last weekend and the audience was basically 18 to 21 years olds. It wasn’t a classics night so I was mixing up some old Disco with some House and some new stuff, very much the Glitterbox model. I played Back to Basics and they were all singing it back to me and when I played Lola’s Theme at the end they went crazy. I’m happy to embrace it!

I think this young generation of clubbers coming through are discovering Disco and House again and that’s a wonderful thing.

IU: Disco must have been a huge influence on your own taste growing up?

SM: Yeah, Disco, Funk, and Soul were big in my world.

I mean we all love a bit of melancholy but when you go out at the weekends you want to have a good time and forget your worries! That was exactly why Disco became so big in the 70’s with the economic depression at that time and why the gay scene completely embraced it. People latched onto it because it made them feel good. That feeling in music is coming back, Glitterbox is exploding, there’s a lot of shit going on in the world these days and when it gets to that point when people feel they’re getting battered over the head constantly with the news they just want to go out the weekend and have a good time.

IU: Between Pacha and Space, you’ve played Ibiza for the last ten years. Are you going back this year and how do you think the closure of Space will impact? Any Space memories you want to share?

SM: Obviously I have amazing memories of Space, both as a punter and playing there. There’s always evolvement, some people can deal with it and some can’t.

I’m not in the same of “Oh fuck, it’s a nightmare”, that island is evolving, it always has!

The one mainstay is Pacha actually but even that’s just been sold so what’s going to happen there I don’t know. I have a love affair with Pacha and have had for many years I’ve had some momentous nights there. Space, I’ve had some great nights there as well, the last few Glitterboxes I played there were pretty special so I don’t feel I’ve missed the boat there. I’ve also seen the plans for the new venue (Hi) and I think it’ll be just as special. There’s obviously a lot going on there, it’s just announced we’ll be playing a night there in June so I’m really looking forward to that. I think I’ll even be back at Pacha once or twice but my main love affair at the moment is Glitterbox!