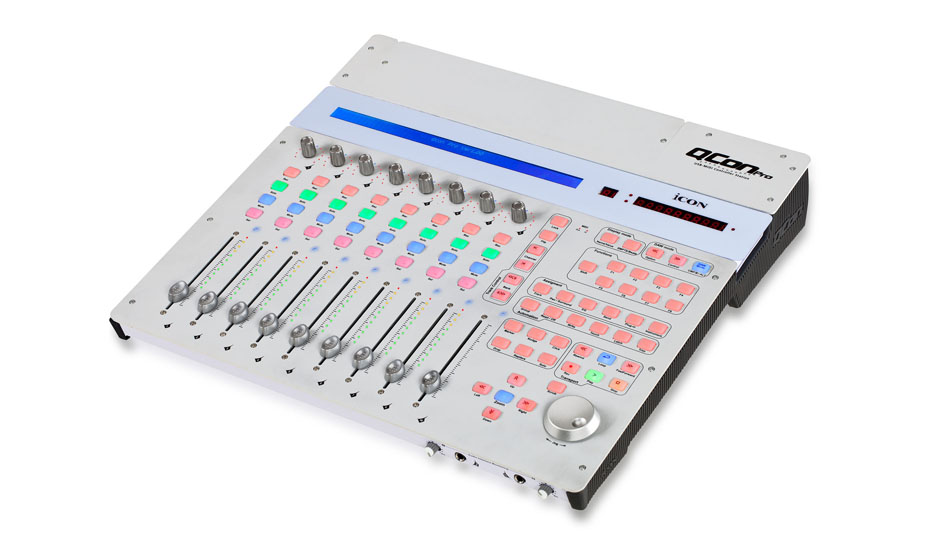 Elevate your recordings with the Icon QCon Pro control surface with motorized faders. Rather than using a keyboard and mouse, the QCon Pro offers tactile control over the most essential functions of your DAW including navigation, transport, track level, plugin parameters, recording, editing, automation, and more.

The Icon QCon Pro has eight channel strips, which can be set to control any track in your session, including audio tracks, MIDI tracks, and return tracks. The Track-Shift function shifts tracks one at a time, while Bank-Shift skips through banks of eight tracks. Each channel strip includes a mute, solo, select, and record arm button, a 12-segment LED meter, and a touch-sensitive motorized fader. Above the channel strips are eight rotary encoders with LED rings and push-reset for dynamic control of sends, panning, EQ, effects, and more. Activating the Flip feature sends plugin control to the motorized faders while the rotary encoders control the track levels; essentially swapping channel fader and encoder functions for more precise control over plugin parameters. A motorized fader is also provided for the master output channel.

The Icon QCon Pro is expendable to up to 32 channels using Icon QCon EX extender units. The QCon EX features eight channel strips identical to the QCon Pro. All of the channel controls on the QCon Pro will also affect the connected QCon EX units, including Track Shift, Bank Shift, Flip, and automation. Up to three QCon EX units can be connected with a QCon Pro.

In addition to the channel strips, the QCon Pro offers control of navigation, playback, recording, automation, editing, and more. Select tracks, regions, and clips, using the arrow buttons, and use the jog wheel for fast scanning and scrubbing through the timeline. Set the automation modes directly on the control surface, and use the motorized faders, encoders, and buttons to automate your mix. The QCon Pro also has 8 assignable buttons and a Shift button for additional layers of control.

An illuminated display with adjustable viewing angle is provided to give you real-time feedback of your session, including track names, parameter values, and playback position in bars/beats and SMPTE time-code.

Behind the display is an expansion port for the Icon UMIX1008 Satellite audio interface. Turn your QCon Pro into a full 24-bit/192KHz DAW-based recording workstation with 8 analog XLR/TRS Mic/Inst/Line inputs with gain control and phantom power, 6 analog TRS outputs, plus S/P DIF in and out. There are also two headphones outputs on the front of the QCon Pro for use when the UMix 1008 is connected.

The Icon QCon Pro comes bundled with Cubase LE and includes factory presets for most popular DAW’s including Cubase, Nuendo, Logic Pro, Pro Tools, Ableton Live, Samplitude and Studio One. Every control on the QCon Pro can be custom-mapped to any MIDI application using the included iMapTM software. The QCon Pro uses Mackie Control and HUI protocols for presets and automatic mapping, and can be configured for general MIDI values as well.