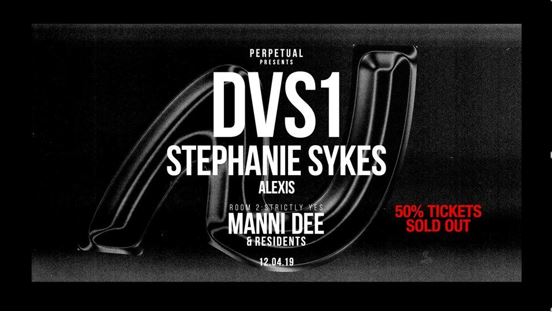 Music has always been at the heart of Bristol, UK renowned genres such as drum and bass, jungle and dub has been the evident beat that keeps this heart going. However, the popularity of techno’s deviant sister ‘industrial techno’ will step onto the scene on the 12th of April at Motion. Newcomer event company Strictly Yes and Motion event regulars Perpetual. The event will see headline American powerhouse DVS1 and the UK’s own innovator’s Manni Dee and Stephanie Sykes.

Only on the scene for a year, the Strictly Yes boys have sure enough made their mark on Bristol’s underground electronic music scene. Their aim was to re-revolutionize the techno genre in Bristol’s small scene, introducing and reintroducing audiences to the raw, raucous and remorseless beauty of the genre. Their most recent project (TRANSITIONS) has seen them host the likes of Nur Jaber, Reflec and Janice in the shadows of a derelict, high rise swingers club named ‘Techno Tower’s’. Perpetual has enticed crowds of the finest ravers around with warehouse headliners such as Rodhad, Maceo Plex and Daniel Avery.

Berghain headliner and Klockwork’s signed DVS1 has had a career spanning from the 90’s Midwest rave era to today maintain his reputation as one of the industries wisest and passionate artists. ‘Hardcore supremo’ is one of many terms to describe Manni Dee. Manni is to be seen at events such as DSNT and Meat Free, and to be heard on the radio waves of Rinse FM and NTS.

His music contains a dark, spiritual and political attributes-an example of this being post Brexit track ‘London Isn’t England’. Stephanie Sykes has shared her talent’s as a DJ and producer around the world, heralding from the gritty north of Manchester she has brought its industrial sounds to the awe-filled audience. Tracks such as ‘Sikker’ and ‘Sakura’ are some that portray her euphoric production.

Following this steamer of an event, Strictly Yes will host and bring hot property and outstanding female artist VTSS to a top-secret location. VTSS’s career has taken off recently with being in an alias with Discwoman and SPFDJ’S label Intrepid Skin, releasing floor filler tracks as ‘Linked’ and dominating social media as a light-hearted influencer.

Two top nights to put down in your calendar, expect mischief and sweat ridden bodies dancing in synchronicity to the same, beautiful beat!