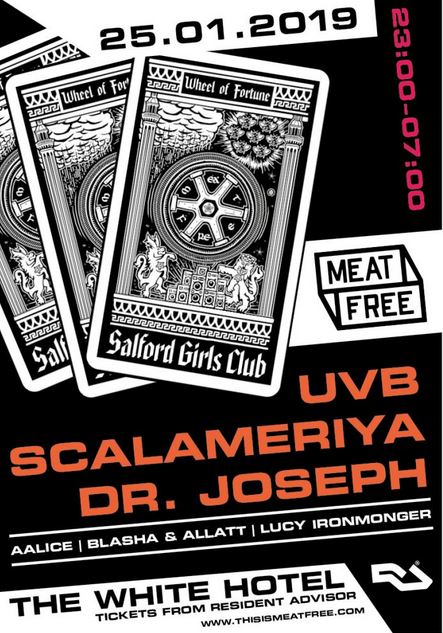 The Meat Free girls have duplicated the same freedom and soul as the Manchester rave era in the 90’s up to the present date, with six years of events under their belt they have a reputation of unconventional and colourful LGBTQ friendly electronic music events. The new twilight zone of Manchester in Salford’s industrial estate is a grimy, underground nightclub The White Hotel. Most weekends its patrons see the most brazen and progressive event’s which the city centre would be quite apprehensive to put on. Tonight, will see the long-awaited dark and relentless techno artists UVB and Scalameriya perform.

Anticipating the night ahead, a transport delay set me back two and a half hours’ but was still raring to go. The night was packed with people from all backgrounds: gay, straight, students, men with big beards in work clothes, middle-aged Mord t-shirt wearing advocates and outcasts with outlandish personalities, all dancing to the same beat. Scalameriya was shredding the dancefloor to pieces with his aggressive sound that set’s a scene and tells a story of a future controlled by A.I and the way to defeat it is through music. The Serbian artist is mysterious with his online bio reading ‘A completely normal superhero’, I took notice from his set his love of fantasy as it portrayed villainous industrial and dark mechanical beats that captivate your mind and takes it to another dimension.

UVB was to follow and the French artist delivered with a floor stomping ecstasy of heavy and transcending bangers. The tenacious and steely melodies gave homage to the blossoming of the French industrial techno scene, a war cry that fights against the hierarchy and injustice in society.

The evening closed with Meat free resident Aalice who is an up and coming talent paving the way for northern, female DJ’s. Her energy radiated through her performance, the endearing bleeps and kickdrums made a man by the side of me lose all willing control of his body whilst dancing. One of the memories I take with me from the night was when she dropped ‘Cosmin TRG-In Your Body’, as the sampling from the track spoke “and now release exhale, just be here in your body’ everyone on the dancefloor was transported into a meditative state. A warm end that finished with applause and cheers.

The Meat Free events are at the beacon of the ultimate UK clubbing ‘experience’. Until the next night of music and mayhem!