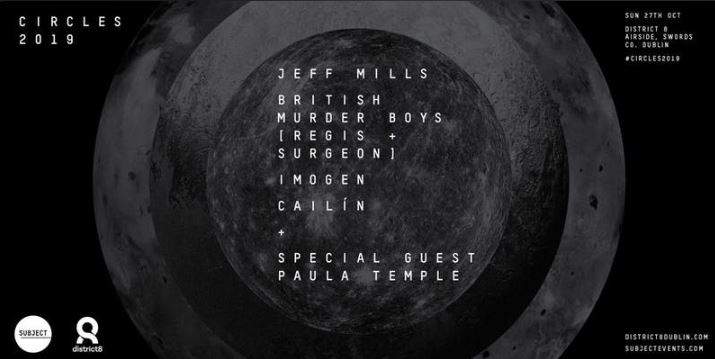 As usual, District 8 in collaboration with Circles pulled out all the stops and organized one of the most memorable Techno nights this year in Dublin, it was sensational!

Everything was perfect, from the venue to the crowd and the incredible heavyweight line-up! The visuals made by MWK were the cherry on the cake to complete the dark warehouse vibe we all love. The new venue in Jam Park is much bigger and is equipped with a sound system five times more powerful than in the previous location making the whole building shake on those frenetic beats.

The outstanding line-up made of Jeff Mills, British Murder Boys, Paula Temple, Imogen and Cailín were primed to deliver pure techno madness on the main stage and they didn’t disappoint. On the second floor upstairs, Mode_1, Tr One and Conor Feeney served up flowing tech house that was perfect for those moments when you wanted to relax from the incessant beats downstairs.

| The whole night had an incredible energy that was building and building with everyone amazed by the slammin performances that each DJ delivered.

The night started with Cailín and her usual good techno tunes. The Irish DJ really started to make a name for herself in the past year and we know why. Even though we didn’t get the chance to hear a full set out of her as District 8 opened a bit late. The tunes were flowing and everyone eased into the mood because they knew how heavy the night was going to be.

The following set was from the English DJ, Imogen, it was the first time I’ve seen her play and it was a great surprise! She coupled dark techno with acid, mind-melting synths and pounding bass riffs that warmed up the crowd, and when she dropped Jacidorex Abyssal Kick as her last tune, the people were ready for what was coming next: Paula Temple.

That night, like every other night before, she killed everything. She started on an absolute stomper and kept getting stronger throughout her whole performance! Her set had many elements that she perfectly merged together to create this incredible mix. It was a dark heavy techno set with acid, hints of rock all of this tied together in a 90’s vibe.

| On the second part of her set she went deeper into the industrial vibe, motivating the up for it crowd to stomp on those fast paced beats. It was a dark, loud raw techno set

Hard enough to pass after the techno queen, the British Murder Boys made an amazing live performance. Surgeon and Regis, the infernal duo definitely had the most experimental set of the night. Regis used a microphone to add some vocals and interference which added a vibrant dynamic to the set.

| Sometimes it was like being in a rave in the 90’s with the glitchy modular sounds they used.

Their transition and more overall their set was so smooth and perfect that you could forget it was live. The 10 last minutes they went heavier and darker, a clear shift was made from the more glitchy sounds to a strong bassline.

The last set, made by the mastermind tastemaker Jeff Mills was tight despite the unfortunate loss of some his luggage and equipment at the airport, he still managed to deliver something good. Luckily enough he had his indispensable Roland TR-909. The set wasn’t the most amazing performance we have seen from him, but given the circumstances, it is more than understandable. The quality of the sound was perfect; very progressive with the first part of the set more focused on high notes.

| However, on the second half of the set it became heavier darker and more bass centered that built and led up to his classic The Bells, the crowd went mad, passion was unleashed, and you could feel an incredible energy on the dancefloor.

Overall, the night was amazing, hats off to the crew and the artists. The night was enjoyed on the best conditions we could hope for!